An expansive (and undoubtedly expensive) and detailed new production of Zandonai’s seldom performed Francesca da Rimini had much to recommend it. First and foremost, Svetla Vassileva has all the goods (and then some) to meet the myriad challenges posed by the title role: decent lyrical sensibilities for the limpid, introspective, (dare I say somewhat) self-pitying phrasings; good Italianate styling; and firepower galore to ride the massive orchestral surges that crop up in the final two acts. Perhaps too much firepower and a few too many decibels. There were a handful of hurled top notes that had a decided “u-wanna-see-how-loud-I-can-sing?” attitude to them that threatened to push the tone into sounding like the “All Clear” signal.
But those over-achieving moments aside, the fact is Ms. Vassileva wanted for little in providing a dramatically engaged, musically sound traversal of this demanding role. The lovely Bulgarian may have just a hint of Slavic metal in her instrument, but when she caressed some of those melting softer phrases it was like ‘buttah.’ She might benefit from dialing down the volume knob even more frequently. We can certainly hear you, Svetla! Her total involvement in the text and the drama made her an exciting partner to her co-star, local favorite Roberto Alagna, returning to the company after a considerable absence.
It was not long ago that many thought his career had irrevocably taken a step back. His performances were often more noted for his being over-parted and for cracking a top note or two than they were for the gleaming vocal excellence of his earlier promise. If his Paulo is any indication Mr. A is decidedly back on form and could justly be re-numbered among today’s leading tenors.
Perhaps the aging process has finally conferred the genuine weight on his lyrical instrument that he used to seek to impose on it in roles just outside his comfort zone. Or maybe he’s been to Lourdes. Whatever the reason, the tone has turned a gorgeous amber and his technique seems to have gone back to being grounded in the speaking voice (as opposed to the yelling voice). Having enjoyed his lyrical Romeo in Chicago some years ago, I was amazed by the maturation of the instrument and the artist. And, no minor consideration, Roberto still looks boyish and can cut a youthful figure. A perfect “Paul the Handsome” if ever there was one. His complete immersion into the confrontations and complications of his affair with Francesca made for sizzling theatre.
There was no weak link in the extensive cast of first rate soloists. George Gagnidze offered a chilling presence and wielded a searingly powerful baritone as the crippled Giovanni, perhaps ‘the’ performance of the evening. William Joyner deployed his steady, steely tenor to good end as Malatestino. Both Gagnidze and Joyner managed to balance the tricky feat of being operatically evil without being Snidely Whiplash caricatures.
Francesca’s ladies were a dynamic women’s quartet that might have been in training for duty as Rhein Maidens or wait, make that Walk?res, so ringing was their contribution. For the record they are: Manuela Bisceglie, Carol Garcia, Andrea Hill, and (first among equals) the splendid Grazia Lee. Sadly, the role of Samartina requires little of the excellent singer Louise Callinan past the first Act. It would have been nice to hear more from her. Wojtek Smilek made much of his brief appearance as Ostasion, and Alexandres Kravets was a rich-voiced Ser Toldo Baradengo. It was quite a long time before we got to sample Cornelia Oncioiu’s vocals as the attentive slave, but she made it well worth our wait, regaling us with a smooth, honey-toned mezzo.
Set Designer Carlo Centolavigna and costumer Maria Filippi have conspired to place the show in the Art Nouveau period of its composition. Much of the set design is accomplished with insets (such as the elaborate garden) co-located in the handsome drawing room of author Gabriele d’Annunzio’s Italian villa. The one nod to the story’s period is the costuming for Francesca and Paolo, which morphs into some pre-Raphaelite paraphrase. There were some lovely, evocative effects (especially of lighted portraits in a Klimt-like collage) that may not have been the final word on perfectly framing this opera, but were nonetheless atmospheric and engaging. Hans-Rudolf Kunz achieved some wonderful lighting effects and best of all, you could see the singers’ faces. (Not always so, believe me.)
I quite liked what Giancarlo del Monaco did with the staging which had good variety, motivated blocking, excellent use of the space, and sensitivity to the meaningful placement of singers. He managed to tell the story with clarity and purpose. His invention of making John an invalid in a wheelchair was quite brilliant, and made for some interesting staging effects as the cripple dominated Malatestino in a Joan-Crawford-Baby-Jane reverse face off. Hell on wheels, baby!
Daniel Oren had considerable success in the pit, drawing nuanced and idiomatic playing through the whole gamut of Zandonai’s masterful orchestral effects. He not only lovingly relished the delicate subtleties of the scoring but also whipped the group up into a bombastic frenzy as required, thereby challenging his game soloists to ride the wave of sound. They did, but a little restraint might keep the proceedings from bordering on the strident. Francesca was a celebrated role for the diva Renata Scotto, of course, and a few nights later I found myself back the Bastille for another take on a Scotto signature role, Luisa Miller. 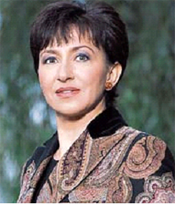 Lovely Krassimira Stoyanova does not need to worry about any comparison for she has everything required to be today’s leading exponent of the role. Like La Scotto, she can float breathtaking translucent high notes that she can swell or diminish at will. Her crystalline voice somehow manages to be bell-like at one moment and spinto-esque at the next. Her clear, poised tone manages to have considerable presence at all volumes and the registers are all treated with a seamlessly even production. She is also a poised actress and suggests a highly believable young heroine. Okay, okay, one or two of the very highest notes turn a tad brittle at forte but all told this is a major role assumption by a major artist.
As her dad, Franck Ferrari showed off a swaggering, sympathetic baritone of considerable range and power. Mr. Ferrari does pull a trick of covering the very top notes ever so slightly but it was a no-miss technique that did not distract from the overall pleasure to be derived from his vocalism. This was a notable impersonation of Miller and deserves to make the rounds of major houses everywhere.
Marcelo Alvarez was announced as indisposed before the second half, so I was mentally revising my first impression that perhaps this is a lyric voice that has most, if not all, of the resources to fully realize Rodolfo in such a large house. The phrases that called for full-throated abandon seemed to stretch him to the limit, and a high note here and there was downright effortful as he seemed to try to wrestle it to the ground. But he was indisposed so…maybe another ‘listen’ another time is in order.
Still…hmm…when he pantomimed in his curtain call that it was actually his stomach that was indisposed, I wondered if my initial reaction remained pretty much on the mark. Predictably, his Quando le sere al placido was arguably the highlight of not just his performance, but ‘the’ performance. I see that Marcelo is regularly singing roles even heavier in houses even bigger. Hope he knows what he is doing, and that his stomach holds out…
Orlin Anastassov’s Count Walter was solidly voiced if unsubtle. He seems to keep his ringing bass at full throttle much of the time and likes to linger on final notes just a bit past the cut-off. The outpouring of sound suits the role but some gradations in approach and dynamic would make it even better, and perhaps make those sinuous grupetto-like turns of phrase a little less laboriously woolly. Maria Jose Montiel made for a glamorous Federic, and it was a pleasure to luxuriate in her creamy, pulsing mezzo.
I wanted to like Arutjun Kotchinian’s Wurm more than I did for he sings with great understanding of the role, his tall, lean physique is a perfect look for the part, and he possessed of a personalized, pleasingly diffuse bass instrument. As long as he was singing at mezzo-forte Kotchinian displayed steady control over his tonal output but it has to be said when the volume and tempo ratcheted up, he occasionally strayed from the core of the pitch and smeared a few arching lines. In the small role of Laura, Elisa Cenni was startlingly good, capturing our attention in her brief appearance with her assured, characterful vocal presentation.
Daniel Oren was again in the pit and elicited thrilling results from the excellent Paris Opera Orchestra. Seldom have the strings sounded richer or more vibrant, and Maestro Oren managed to bring forth more detailed playing than I have yet encountered with this score. Special praise must be reserved for the superb clarinet solo work all evening long. Whether essaying jaunty flights of fancy, or haunting mood setting, this wonderful soloist contributed immeasurably to the musical effect. Allessandro di Stefano’s tightly drilled chorus complemented the orchestra measure for measure.
William Orlandi provided pretty much a unit set design that is pretty much, um, pretty. Pretty pretty pretty. A sumptuous Alpine drop backs a rolling, astro-turfed green meadow and other scenic elements come and go, and come back again. And go again. We are either, a) in an open-faced rustic chapel, or b) in a series of Romanesque columns, or c) in the open meadow. That’s it, pick one. All of this is framed by a rounded sweeping arch-as-false-proscenium which gives the effect of looking at a snow globe.
Orlandi’s costumes pretty much out-pretty the pretty setting, whether finely detailed folk costumes in a peach palette, or severe black courtiers, or a red-coat-with-white-pants, top hat-bearing hunting party. Indeed, it is the hunting party that arrests Miller, who apparently could not out-’fox’ them. The blame for the dim lighting goes to Joel Hourbeigt who manages to cast a shadow on nearly every singer (consistency, that’s the key), and generates all the magic of Twilight in Hoboken (with a hint of Dusk in Des Moines).
It is hard to know what stage director Gilbert Deflo actually contributed. I cannot imagine much would have altered had there been no director, for it seemed the experienced singers were left to improvise, or to variants on The Three S’s: Stand, Sing, ‘n’ Semaphore. The chorus tromped on from off left and right and stood on the sides every single time they came on, save for the men’s hunting group who got to come center stage…and stand. Luisa and Rodolfo’s blocking ran the gamut from Operetta Stance #3 to OS #4. When Miller entered to discover his daughter dying on the ground, he stood about fifteen feet away, hectoring but immobile for at least two minutes. Stood there! Your daughter is down for the count, dad, run and comfort her! Even if you use OS #5!
At best, this was a concert version in a charming setting with the highest musical values. As theatre, I dearly wished I could reach out and shake up the snow globe on display and see if some real theatre might shower down. Pity. Pretty, but…pity.
James Sohre