From a
specialty occasion, a meeting of minds and interests and instruments for a week
every two years, its classes and performances culminating in the sometimes
casual staging of a forgotten opera from an obscure corner of the repertory,
cast with singers soon to become Early Music A-listers (Suzie LeBlanc, Karina
Gauvin), it has become a major event on the international calendar, the most
important Early Music festival in North America, a riot of concerts and classes
and displays with a healthy fringe to boot. The operas are now elegant
spectacles starring singers already on the international A-list
(Philippe Jaroussky). This year, the opera given five performances at the
colorfully restored Cutler Majestic Theater in Boston plus two more in Great
Barrington is Agostino Steffani’s Niobe, Regina di Tebe, a work
premiered in Munich in 1688. As the rare performances of Steffani’s
operas always do, Niobe left audiences wondering how they had missed so
accomplished and appealing a composer, and eager for further acquaintance with
his oeuvre.

Steffani (1654-1728), though born in the Veneto, spent most of his composing
career at German princely courts. He specialized in vocal music—though
ballets are important in his operas, he usually subcontracted their
composition. He was also a diplomat and possibly a secret agent of the Vatican
during a tricky time in Central European politics. After retiring from his
secular careers, he became a bishop and a high papal official, but holy orders
had no effect on the worldliness of his opera plots. Famous in his day for
operas, church music and for chamber compositions for vocal amateurs, his music
was soon forgotten, a fate that also befell the operas of such even more famous
contemporaries as Handel (a sometime protÈgÈ) and Alessandro Scarlatti. Today,
a dozen masters (and many minors) of these eras are just what the opera
audience craves: Operas of Cavalli, Lully, Conradi, Caldara, Vivaldi and Hasse
are revived everywhere. Steffani belongs on that list; thus BEMF has gotten
around to him.

BEMF’s Niobe is billed as the “North American stage premiere”
of the opera (or, possibly, any Steffani opera), for those who recall the
concert performance of Niobe at Alice Tully Hall in 1977 by the
Clarion Society. Clarion also presented Steffani’s Tassilone, and what
I remember from those concerts is how impressed I was with the melodious
scores, how we were all knocked over by their quality, how certain that these
performances would lead to a Steffani revival. They did not. Cavalli and Handel
and Rameau and Charpentier intruded, and today they can be heard in every
musical capital and festival. Perhaps it is Steffani’s turn at
last—the BEMF Niobe follows acclaimed recent productions at
Schwetzingen, Luxembourg and Covent Garden,. One hopes that BEMF, as it has
done prize-winningly in the past, will record this superb performance. 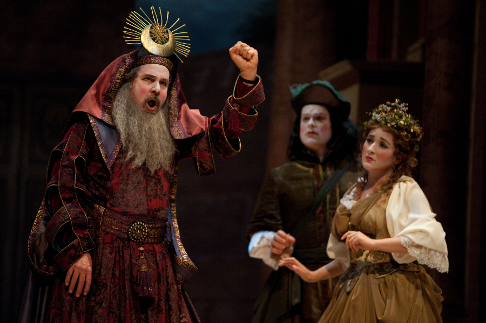 A DVD would be an even happier idea, considering the production’s
color and grandeur, but is probably beyond the resources of the festival. BEMF
has given Niobe the splendor and special effects worthy of a proud ducal court
under the influence of Louis XIV’s Paris: On the small but deep stage of
the Cutler Majestic, we behold the glittering marble metropolis of ancient
Thebes; the perilous Claude Lorrain-ish woods that surround it, which are
haunted by fierce (dancing) bears, chariots drawn by winged dragons, coy
shepherdesses and other wild life; a sacred fane of the goddess Latona; a
magical paradise to which Mars (actually the disguised Creonte) transports the
bewitched Niobe for purposes of—oh, let’s keep it clean. (He succeeds,
but during an intermission.) Much influenced by the operas of Lully, Steffani
included many ballets in his works, and these were choreographed stylishly and
in the proper period. The special effects that have always been essential to
grand opera include Anfione singing to raise, magically, the walls and gates of
endangered Thebes. This was surprisingly and elegantly brought off,
accompanying Jaroussky’s exquisite invocation, and so made perfect
dramatic and musical sense. The designers of the Met’s Ring
should observe this scene to learn how mythic events can be staged without
forfeiting musical and emotional power. (Gilbert Blin was the director and
scenery designer. He often made do with painted flats—old technology you
might say—but the painting was sumptuous, and flats made earthquakes
easier to dramatize.)

In Greek mythology, Niobe was the lady who boasted of her scads of children
and was duly punished by losing them and turning to stone, a myth that
(I’ve always supposed) referred to the loss of innumerable youths to
every passing germ in the pre-Pasteur era. Her husband, Amphion, was regarded
as second only to Orpheus as a singer and player of the lyre, famed for raising
the walls of Thebes by song (euhemerized as playing lively work songs to
encourage the builders). That is, besides begetting Niobe’s twelve (or
fourteen or however many) children, his major mythological accomplishment. In
Steffani’s version, Niobe has a wandering eye most unsuitable to a
matron, and Anfione, besides raising the walls with his singing, is of a
philosophical turn of mind, inclined to retire from power to his deep
meditations. This leads to a wonderful aria about the music of the spheres,
illustrated in Boston by having his seven children circle him bearing globes of
differing sizes. Jaroussky, tall, slim, handsome and bewigged like Louis XIV,
sang all this movingly in his pure countertenor, none the less exciting for his
prevailing calm. His style of ornament hewed scrupulously to the earlier,
French style rather than the rapid divisions he performs in Handel’s
operas, lingering to express “tormenti,” weeping his
“pianti,” and at last (having stabbed himself) dying on a delicious
fading melisma.

Amanda Forsythe, a Boston local favorite, sang Niobe. She has a dignified
mien and a lovely soprano, great sensitivity to text and its tasteful
ornamentation: She drew out the agonies of her “pena” (pain) in a
most affecting way, and she turned convincingly to stone in the final moments
of the opera. Most of the role presents her as a haughty, not to say shrewish,
queen, wife and mother or a sarcastic lover, but Forsythe’s finest moment
was her sensual aria of awakening in (she imagines) the arms of a god at the
opening of Act III, when her lyrical runs expressed happily sated eroticism. A
little later, though, humiliated at her deception, she sang an aria threatening
the very gods—who punished her in due course. This revealed
Forsythe’s greatest defect: Her instrument is too small for heroic
outcries. Wisely, she does not force it past its natural limits, but one misses
a dimension in her arias of rage. Happily, she has found her niche in Early
Music, which will not often demand that she fill large halls with stormy sound;
she sang Manto successfully in the London Niobe. In Boston, this
secondary soprano role, a priestess in the throes of first love, hence not
forced to quite such hysterical extremes of emotion as is the mobled queen, was
taken by Yulia Van Doren, who won my heart with her silvery, bell-like tones,
whether delighting or sorrowing or sighing. I hope to hear more of her. 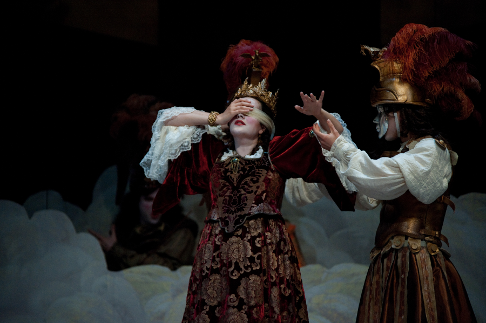 Colin Balzer sang Manto’s lover, Tiburino, with a most agreeable and
flexible tenor. Charles Robert Stephens sang her father, the legendary
know-it-all Tiresia, with pleasing resonance but little oracular command.
Countertenor Matthew White made a serenely delicious Creonte. Jesse Blumberg
sang wicked Poliferno with a likeable light bass but inaudible low notes. JosÈ
Lemos, a contralto countertenor dressed like a baroque Katisha with stalks in
his hair-do and a lewdly fluttering fan, had the stock role of the wicked old
nurse played in drag, who utters cynical morals to undercut everyone
else’s high-flown sentiments. His voice can be beautiful, but Nerea
mostly calls for comic commentary, which he generally indicated with gravelly
low notes or squawky high ones.

An array of baroque strings and winds (including recorders) spread out below
the stage to the right-hand corner, where BEMF’s directors, Paul
O’Dette on baroque guitar and Stephen Stubbs on some sort of keyboard,
directed things, with harp, theorbo and viola da gamba joining them as continuo
for the recits. This was all very pleasing except when valveless trumpets and
trombones scattered about the auditorium joined the overture: Either they were
playing raggedly or Steffani’s harmonies were mighty advanced. The bits
of the London Niobe available on youtube suggest more effective timpani and a
more modern symphonic sound there, which may have been necessary to present the
work to a grand opera audience, but for Early Music fans and a smaller theater,
the BEMF forces were sufficient and elegant.

Besides Gilbert Blin’s magnificent sets and Anna Watkins’ plushy
costumes and the stiff but versatile PALS Children’s Chorus, who supplied
and presumably trained Niobe’s enormous brood of doomed children, major
credit for the evening’s splendor must be accorded to choreographers
Caroline Copeland and Carlos Fittante, who designed pastorals, hunts, revels
and flirtations to make the point that, at the French-influenced Munich court
of Elector Max Emmanuel, dance interludes between stretches of singing were an
important part of an evening’s musical entertainment.