This is the question which faces
directors and composers who determine to stage in its entirety Puccini’s
infrequently performed triptych of one-act operas, Il Trittico.

Is there a ‘unifying factor’? Should one even attempt to look
for one? Perhaps it is the contrasts between the Il Tabarro, Suor
Angelica and Gianni Schicchi that produce maximum theatrical
effect and musical impact? 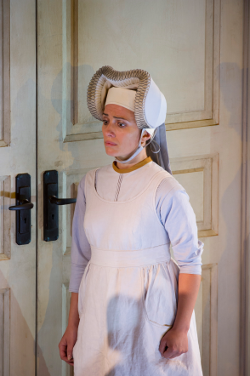 Il Tabarro, in director Richard Jones’ and conductor Antonio
Pappano’s conception builds effectively from the leaden, repetitive
melancholy of the opening scenes to a central moment of passionate ecstacy
before falling terrifyingly and inexorably to its shocking, vicious conclusion.
That Pappano has a masterful appreciation of the Puccinian idiom and
unsurpassed ability to match musical structure to dramatic denouement, is
apparent from the first: the latent violence of the riverside community
suggested by disturbing and startling surges in dynamic and melodic compass
which disrupt the hypnotic rhythmic repetitions of the lapping waters.

The bleakness is broken by the Giorgetta’s outburst of yearning, the
soaring warmth of Eva-Maria Westbroek’s gleaming soprano, revealing the
stark contrast between feminine ideals and dreams and the wretched reality of
the enchained lives s of those who make their pitiful living from the river.
She is joined by Aleksandrs Antonenko’s Luigi in a rapturous paean to
romantic imaginings. The only unfortunate aspect of Westbroek’s
performance was a tendency for her physically voluptuous movements and
exhibitionism to remind one of her last ROH incarnation, another girl longing
for the city lights, Anna Nicole. 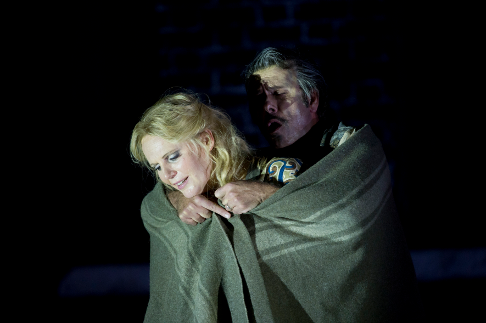 Lucio Gallo as Michele and Eva-Maria Westbroek as Giorgetta

Antonenko’s Luigi possessed a masculine swagger which was matched by a
lustrous tone; together they conveyed his commitment both to revolutionary
ideals and to human love. After a slightly over-blown opening, Antonenko
relaxed and revealed his huge vocal capacity and glossy warmth. His affecting
and appealing sound were complemented by confident, convincing acting.

Michele was sung by Lucio Gallo, whose slightly dry vocal timbre and
physical rigidity successfully communicated his resignation and endurance,
before stoicism was finally overwhelmed by self-destructive bitterness and
frustration.

The set was effective cast by evocative shadows, literal and metaphorical,
capturing the grey misery which will ensue for all the protagonists. Lighting
designer, D.M. Wood, exploited similarly sombre shades in Suor
Angelica, to convey a quieter loneliness; while in Gianni
Schicchi contrasting flashes of brightness and darkness suggested the
deceitful twists and turns of the plotting relatives.

Suor Angelica presents another enclosed world, but here the desire
to escape is not represented by an aspiration to return to the bright lights of
Paris in search of earthly pleasures, but rather by a longing to transcend
earthly preoccupations and discover eternal salvation and bliss. The Catholic
message perhaps has little resonance with many modern opera-goers and Jones has
made a brilliant decision to replace religious institutionalism with secular
rituals, to dispense with convents and cloisters in favour of the hospital ward
of a children’s hospital, the nuns exchanging their habits for the
uniforms of a nursing order. The re-location is inspired, and wonderfully
realised in Miriam Buether’s arresting set. 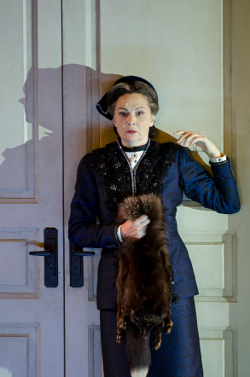 Anna Larsson as The Princess

In the title role, Albanian Ermonela Jaho, making her debut in the role
after replacing German soprano Anja Harteros at short notice, did not always
surmount the rich orchestral fabric, but her sound is attractive, and she often
attained the requisite long-phrased melodicism.

In the libretto, recognising that her decision to commit suicide is a mortal
sin, Angelica is overcome with guilt and prays for salvation; she is rewarded
with a redemptive final vision of the Virgin Mary and her son, before she dies,
presumably transfigured. Jones replaces this spiritual vision with a more
mundane one: immobile, Angelica stares piercingly, transfixed by one of the
young boys she has been nursing, a painful reminder of her own loss and
culpability. Some critics have accused Puccini’s religious apotheosis of
vulgarity and tastelessness, but in Jones’ hands, any sense of kitsch
Catholicism is transformed into a tragic realism more commonly associated with
Il Tabarro. If Jaho tired slightly towards the close, this only served
to emphasise that any notion of transfiguration is, in Jones’ eyes,
delusory.

As Angelica’s harridan aunt, The Princess, Anna Larsson was suitably
haughty and viciously Machiavellian. The scene in which she compels Angelica to
acknowledge her shame (she has given birth to a child outside marriage), not to
save her niece’s soul but to manipulate her into signing away her
inheritance, was chillingly cruel; most effective too was the way in Buether
re-configures the set, creating a separate corridor for the desolate struggle
between the two women.

Upon learning of her son’s death, Jaho delivers her aria, ‘Senza
mamma’, with disturbing concentration, although her physical trembling,
while painfully affecting, did result in an unfortunately exaggerated
vibrato. 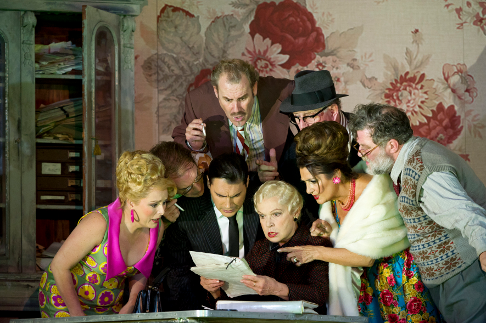 Anna Devin, a Jette Parker Young Artist, had a busy evening, impressing in
all three roles. Highly competent as Sister Genovieffa, and as one of the
Lovers in Il Tabarro, she subsequently stood in for indisposed the
Ekaterina Siurina as Lauretta in Gianni Schicchi. Elizabeth Woollett
as the Nursing Sister and Eryl Royle (Sister Osmina) also pleased.

Pappano grasped the way in which the ritualistic repetitions of the score
accrue emotional meaning, building to a concentrated lyricism of escalating
intensity. The ROH orchestra was the embodiment of instrumental refinement,
particularly in the orchestral intermezzo. 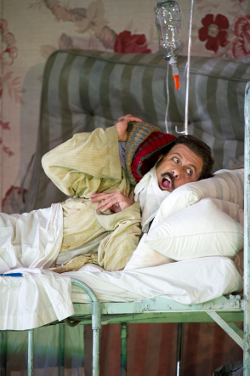 However, the rushing chords which open Gianni Schicci — seen
here in a revival of Jones’ 2007 staging — immediately swept aside
the constrained ambience of the preceding opera, in a breathless dance of irony
and wit.

For once Pappano perhaps didn’t quite always garner the requisite
fleetness of foot but there was much zany zippiness, with visual humour
provided by staging and costumes which recall the cardboard shabbiness of 1960s
sit-com set.

The comic know-how of Gwynne Howells, returning to the role of Simone
— one of the avaricious, grasping heirs of the declining Buoso Donati
— provided some stability and focus among the comic capers. Rebecca
Evans, making her debut in the role of Nella, relished the vulgarity of the
role; while in the title role, Lucio Gallo seemed at times to find it hard to
break free from the dark shadows of Il Tabarro, offering a sardonic
but not ineffective interpretation.

Other strong performances came from Francesco Demuro, who demonstrated a
fervent tone as Rinuccio — although in the set-piece, ‘Firenze Ë
come un albero fiorito’ he perhaps tried a bit too hard — and Elena
Zilio (Zita). 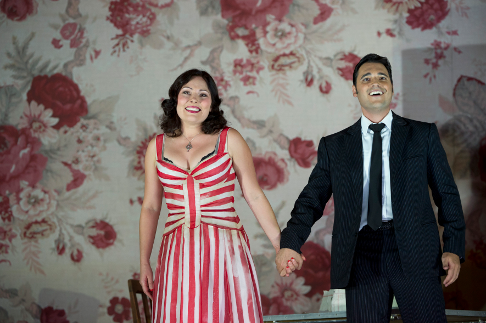 Ekaterina Siurina as Lauretta and Francesco Demuro as Rinuccio

So, is the whole triptych greater than the sum of its parts? In the final
reckoning, it probably doesn’t matter either way: Jones and Pappano
revealed the affective power of each of these three divergent and complementary
works — no musical detail was overlooked, and each was made to cohere
within an impressively paced whole, the varying spatial dimensions of each of
the three operas perfectly judged. It truly was an evening when there was
something for everyone.

All photos by Bill Cooper courtesy of The Royal Opera