Like Victorien Sardou’s original play written as a vehicle
for Sarah Bernhardt, Puccini’s setting has enough sex, violence, and
adult themes to induce responsible parents to keep their children at home. Not
that it stopped the black-tie crowd of the opening-night gala from proudly
parading their adorable five-year-olds in heavily ruched floor-length gowns
along the hallways of the Kennedy Center. The latter, incidentally, has now
officially swallowed up the WNO after fifty-five years of that company’s
independence. Still, in these dire times of budgetary horrors and declining
donations such an alliance might prove a transcendent romance rather than an
apocalyptic tragedy; only time will tell.

The plot of Tosca is well known, and were it not so melodramatic, I suppose
it could be eligible for the prestigious label of “tragic”: after
all, not a single leading character is left alive at the end of Act 3!
Thankfully, this original production, courtesy of Giulio Chazalettes and
director David Kneuss, for the most part does not qualify as a tragedy. Soprano
Patricia Racette (Tosca) is a known quantity in DC, and has a reputation among
the local connoisseurs as a superior singing actress. Throughout the evening,
the singer had plenty of opportunities to prove just how well deserved her
reputation was, and she missed none of them. Unlike in last season’s
unfortunate IphigÈnie, Racette was not constrained here either by a
director’s choreographic posturing or by the need to climb precarious
metal scaffolding at high pitch. Instead, her acting was realistic, and her
period clothes comfortably familiar. The steps of the Castel Sant’Angelo
were wide and easily mountable, lending her final leap off the battlements its
startling immediacy and dramatic flair that brought out audible gasps from the
audience, instead of the audible chuckles that so often result. The leap was
also, of course, entirely over-the-top, but then so is the entire part: Puccini
followed Sardou in making his Tosca a real diva, and Racette had almost too
much fun playing a “tragic heroine playing herself.” This was
particularly apparent in the opening scene with Cavaradossi, where
“playing” is really all Tosca does; her jealous rage more the stuff
of romantic comedy than high drama. The drama comes in Act 2, undoubtedly
Racette’s best. Her performance was electric, driven by raw emotion and
almost visibly crackling nervous energy, resulting occasionally in a somewhat
faster tempos than are usual for the part. “Vissi d’arte” in
particular was fast — or was attempting to be: the conductor simply
refused to let Racette run with it. Clearly, after singing a few hundred
Toscas in his career, Placido Domingo has very definite ideas of how
one should and should not sound — candles or no candles (for those
passionately interested in this most vital aspect of every Tosca
production, by the way, this one has no candles). However, such a minor
interpretational disagreement between the two stars was no tragedy. Nobody was
paying much attention to it, anyway — we were all too busy watching Alan
Held’s scene-stealing Scarpia. 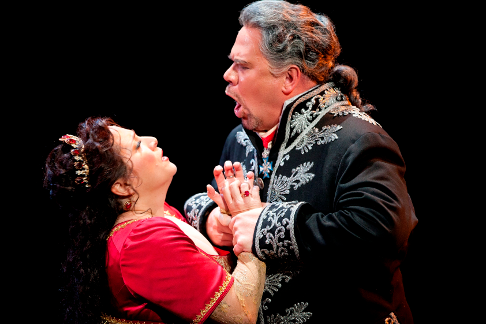 The tall baritone presented an imposing figure on stage — not remotely
Italian, he looked rather like a Nordic god of thunder. Donner is, indeed, one
of Held’s signature parts; fortunately, his performance as Scarpia
possessed not only the necessary hammer strokes, but also a more Wotan-esque
complexity, occasionally bordering on hypnotic. Alternatively suave and
terrifying, Held offered both excellent singing and stellar acting from the
first to the last note. Only the opening “Credo” of Act 2 proved
somewhat unconvincing in his interpretation — exactly because the rest of
the role was so believable. Subtle, nuanced, sinuously seductive Scarpia
created by Held would not be caught dead saying such horrible things about
himself — even to himself. Much better was his feverish monolog in the
Act 1 finale, the famous “Te Deum” scene.

Indeed, the “Te Deum” finale proved one of the best moments in
the production, thanks to Held, a solid performance from the WNO chorus
(including children’s choir), and particularly to its effective visual
design (sets and costumes by Ulisse Santicchi, lighting by Jeff Bruckerhoff).
In an inspired move, the gigantic crucifixion triptych that served as the
backdrop through the entire act suddenly becomes transparent, revealing the
interior of the cathedral, complete with the altar, priest, and parishioners,
who seamlessly merge with the chorus already on stage into a single, impressive
tableau vivant. Overall, the dÈcor for the production looked good: both
tastefully appropriate and appropriately expensive. The neo-classical interiors
in Acts 1 and 2 were both lovely. And although the gloom of the Castel
Sant’Angelo’s stone banisters was somewhat undercut by the addition
of pink marble columns on each side of the stage — the leftovers from the
cathedral interior of the opening act — that was also no tragedy. 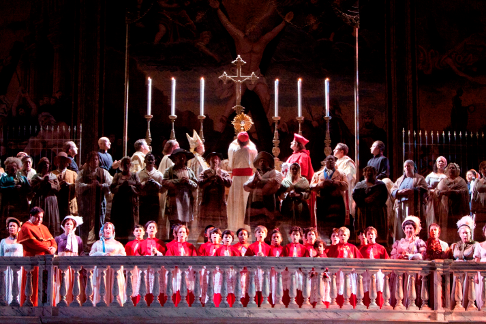 The real tragedies — at least on the opening night — belonged,
in the pit, to the orchestra that seemed yet again simply incapable of playing
in tune, and on stage, to the tenore di forza. Frank Porretta’s voice has
both the steely intensity of timbre and powerful projection we expect of a
Cavaradossi, and he came out swinging since the opening scene, earning some
well-deserved applause. However, his somewhat forced sound production was
worrisome: every note felt like it was being pushed out just a little too hard.
Whether or not the singer was affected by the fact that he was performing a
classic heroic tenor role in front of Placido Domingo (which, granted, might
unnerve even a seasoned performer), I wondered if he would have trouble
sustaining his efforts through the entire evening. Predictably,
Porretta’s voice broke halfway through the climax of “E lucevan le
stelle,” sliding from a fortissimo high pitch into an embarrassing croak.
The audience was extremely kind, but this did not help: much as he tried, the
singer was not able to bring his sound back again. The remainder of Act 3 was
performed in a harsh semi-whisper, which in Cavaradossi’s final duet with
Tosca is simply an impossible sell. Only occasionally did we hear an echo of
the metallic flamboyancy of the opening scenes; the rest was so painful to
endure that one was tempted to applaud the rifle volley from the castle guard
that finally put the unfortunate tenor out of his misery. Hopefully, in the
subsequent performances Porretta’s pacing would improved. If so, the
tragedia of this overall high-quality, solidly traditional production
will have relocated to where it belongs — Sardou’s bloody melodrama
and Puccini’s “shocking” score.

All photos by Scott Suchman courtesy of Washington National Opera