Meanwhile that same year (1992) Los Angeles artist David Hockney bestowed a Turandot upon San Francisco (and Chicago) that is pure Tinseltown. L.A. is famously the Hockney muse, thus the specific muse for the technicolor Hockney Turandot has to have been Grauman’s Chinese Theater. Like this National Historic Monument, the Hockney Turandot vibrates in theatrical shapes and Chinese red, and by now it too is an historic monument.
San Francisco has put its unique stamp solidly on Turandot as well.†The 1977 Jean-Pierre Ponnelle production had its massive stone Buddha that gestured and wept blood when the steely Monserrat CaballÈ succumbed to Luciano Pavarotti in their role debuts, this back in the days when San Francisco Opera pushed the progressive opera envelope in the U.S.† 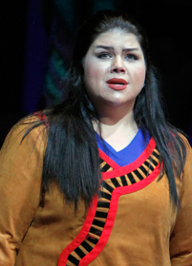 Leah Crocetto as Li˘
These days it is a bit different in San Francisco. There is a stamp of a different sort, it is musical and it too pushes the envelope. Specifically it is the quixotic Italian conductor Nicola Luisotti who makes every score he touches vibrate with color, energy and sometimes questionable theatricality. Put this together with the timeless Hockney Turandot and you hit remarkable pay dirt — the current Turandot in San Francisco!
The Hockney Turandot is, no surprise, like a painting in that it is two dimensional. On this flat surface Ping, Pang and Pong complain, Liu sacrifices, Calaf thunders and Turandot rages. The lack of depth plays directly into the hands of the maestro who likes his singers right downstage center where he communes mightily with his voices and maybe even with Puccini. The current staging by Carnett Bruce is sensitive to artist, character and story telling, and it is precise and efficient in somehow getting and keeping the artists where the maestro wants them and where Hockney surely saw them.†
The performance was riveting from beginning to end. Even so there were those scenes that glowed with new life — the Ping, Pang, Pong conversation for example, made intimate by the three Hockney straight backed chairs painted onto a drop and by the maestro’s oh-so smooth intermingling of their vocal lines. Liu’s first act prayer ‘Signore ascolta‘ was magical in its Adler Fellows innocence, and the Alfani duet (“who is Berio?” Luisotti surely would ask) that ends the opera was articulated with a surprising intimacy that made us actually feel a renewed humanity — no small feat amidst all that bombast. 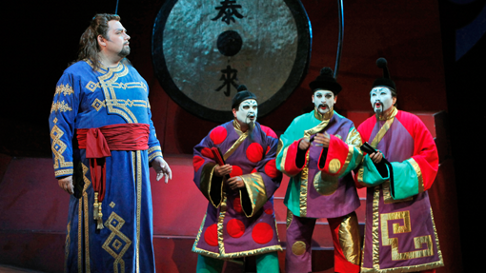 Marco Berti as Calaf, Gred Fedderly as Pang, Daniel Montenegro as Pong and Hyung Yun as Ping
The biggest vocal presence was Italian tenor Marco Berti as Calaf who used his strangely brutal† ‘Nessun dorma‘ to threaten the Chinese royalty and population even more, and more quickly dismiss Liu’s sacrifice. Swedish soprano IrÈne Theorin was far more lyrical in her capitulation than the usual Turandot, though there was icy rage aplenty as she well anchored this story of anger versus power. Against this big house firepower the Liu of Adler Fellow Leah Crocetto was indeed sacrificial, a sacrifice of this symbolic character who must fully embody the supernal power of love. The mix of musical cultures does not work — the Adlers are specifically nurtured contemporary artists whose sophistication is at odds with can belto international artists.
The Timur of Raymond Aceto fulfilled its narrative obligations without adding pathos. The Ping of Hyung Yun dominated the trio of courtiers in association with the vivid Pang of L.A. character tenor Greg Fedderly. Pong was Adler Fellow Daniel Montenegro.
The visual sophistication of the David Hockney Turandot begs precise and brilliant lighting, a need recognized from the inception of this production those many years ago. Just now the lighting was reconfigured by Christopher Maravich though the ending was new. Mo. Luisotti endowed the final chord of the performance with an intense, nearly screaming crescendo that was matched by a crescendo of bright, brighter, blinding light.
Theatrical! No?
Michael Milenski