Of the several step-ins one seemed the most unlikely. But American lyric mezzo Kate Aldrich surprised everyone with a Carmen that was splendidly charismatic. Five years later la Aldrich, now a Rossini diva as well, was to be the centerpiece for eleven performances of this get-em-in-the-opera-house war horse. Guess what! 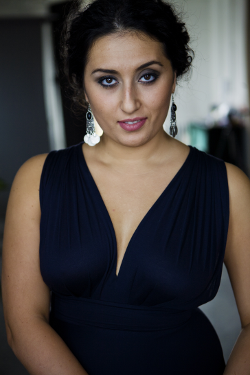 Anita Rachvelishvili [Photo courtesy of San Francisco Opera]
But this time, so far, the replacements have been very likely Carmens. American mezzo and recent Adler Fellow Kendall Gladden took the first two performances. This fine young artist has already distinguished herself as a viable Carmen on several of the world’s major stages. Georgian diva Anita Rachvelishvili, a veteran of the role at La Scala, the Met, Munich, etc., has now made her local debut and takes the next four performances as well. San Francisco Opera still hopes Mme. Aldrich may arrive for the final four performances, but stay tuned.
The problem is that Kate Aldrich is a very specific artist. She has a tonality that incorporates her quite lyric voice with a bright, American presence. It would seem that San Francisco Opera built its cast around this formidable persona and that meant lighter voices and lighter weight personalities. And since Carmen is a dialogue and numbers opera anyway the artistic concept seems to have been to make it a true operetta-like musical.
A light-weight cast was the result. Young Brazilian tenor Thiago Arancam was an adolescent looking and sounding Jose whose singing gave great pleasure but who lacked the power to make Jose’s frustration and rage seem more than a temper tantrum. Current Adler Fellow Sara Gartland possesses a small, quite lovely voice with an engaging flutter. She was a Micaela blown about the stage by the whims of a few soldiers and smugglers rather than the stolid emotional force of Jose’s ties to his mother. 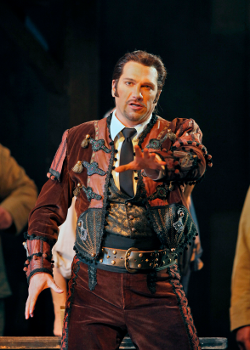 Paulo Szot as Escamillo
Brazilian baritone Paulo Szot was the Escamillo. His claim to fame is the role of Emile De Becque in a Broadway revival of South Pacific and as the caricatural Shostakovich Nose at the Met. Mr. Szot simply lacks the operatic coglioni to fight bulls and seduce Carmen, but he did make a more or less pretty figure on the stage.
All this light artillary confronted a Carmen of maximum operatic magnitude, Anita Rachvelishvili. Mlle. Rachvelishvili has a big, big voice that she manages with grace and subtlety, and she does project a forceful personality if not a particularly sexual one. She apparently arrived in enough time to get her mind around the production’s dialogues but hardly in time to be integrated into its staging, if there ever was any. As it was she made generic Carmen moves from time to time.
This 1981 Jean Pierre Ponnelle production once had an edge. It was in fact the first time Bizet’s spoken dialogues were incorporated at the War Memorial and among the first times on any major stage in the world. To effect such daring Ponnelle obviously needed to downsize the public’s idea of Carmen from grand opera to a music hall ambiance.
This need accounts for the small false proscenium embedded in a massive, full stage stone wall. The little proscenium opens and closes upon some historical scenic ideas (as well as a few more sophisticated techniques) that Ponnelle uses to substitute for the grand opera ideas of locale and ambiance. 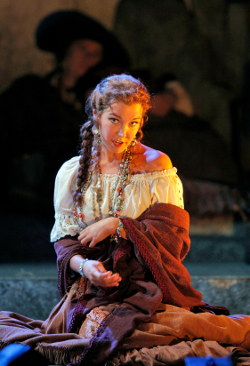 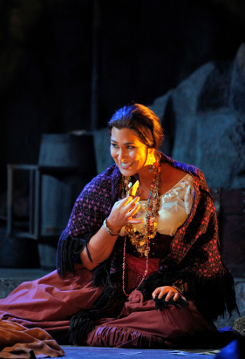 Susannah Biller as Frasquita (above) and Cybele Gouverneur as Mercedes (below)
But more than anything else the stone wall foreshortened stage depth determining that the staging be presentational, like music theater once was (and maybe still is). Can this explain why Jose seemed to be singing the “Flower Song” to the audience? And why Jose and Escamillo confronted one another without confronting one another (they seemed to be confronting the conductor). While the program does credit a fight choreographer these several crucial events that we look forward to in Carmen were inordinately weak.
Meanwhile, o Dio, we had Nicola Luisotti in the pit, a more formidable opera conductor cannot be imagined. Once again blatant staging concessions were obviously made to this tyrannical maestro so that all his musical points could be maximally vivid. And vivid Bizet’s music was. Maybe it was the point and flash of the music that made the stage seem so painfully pallid and therefore undermined our enjoyment of the performance.
Of the comprimarios the Dancairo of Timothy Mix had real flash, and the MoralËs of Trevor Scheunemann well filled the stage. Adler Fellow Susannah Biller as Frasquita lacked the brilliance and volume of the high notes needed to vocally anchor the big ensembles. Wayne Tigges as Zuniga failed to find the fascistic stance that the Ponnelle production introduced to establish a political tyranny equal to the emotional tyranny imposed by Jose’s mother.
The fashion to use the very compromised (i.e. hugely shortened) opÈra comique dialogues in big opera houses has long since disappeared, and it is time to retire the Ponnelle production rather than destroy its integrity by producing it in unfavorable circumstances. The French dialogues just now were a pleasure however, easily understandable to anyone with high school French. Cleverly one Frenchman was introduced into the cast, Micaela’s mountain guide boy, so that we could hear what real French sounds like.
Michael Milenski
Click here for additional information regarding this production.