An
operatic treatment was sure to appear in due course, but due course in
opera-land usually takes at least a generation. Not this time! Young Nico
Muhly’s Dark Sisters, about five wives of a polygamous “prophet”
who has been accused of abusing his twenty-odd children, had its premiere this
month in a visually and aurally sumptuous production by Gotham Chamber Opera
and Music-Theatre Group that will travel in June to its co-producer, the Opera
Company of Philadelphia. 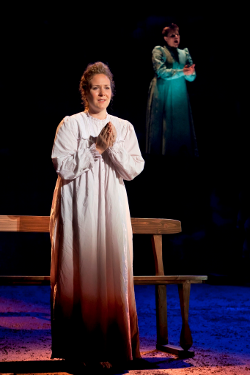 Caitlyn Lynch as Eliza and Kristina Bachrach as Lucinda

Having no previous acquaintance with Muhly’s music, I was tremendously
impressed by his skill at writing for both chamber orchestra (13 musicians) and
voice. First of all, he can write for the voice, in a sensuous, gratifying way
that suits the voices doing the singing. It might be called an instrumental
manner: Voices, solo or in combinations in various ranges echo or mimic the way
he pairs unusual combinations of instruments to shade or emphasize a line of
text or an unexpressed emotion, a violin with an English horn or a flute with
celesta. There are striking effects that support a scene or a moment more
subtly than the high melodramatic manner opera is used to. To a scenario with
very little stage action, Muhly brings vivid musical activity, interesting even
when its working out is not what the listener might have expected.

For one striking example, Act I closes with the Prophet choosing to spend
the night not with one of the four biddable wives who yearn for nothing else,
but with Eliza (Caitlin Lynch), the wife for whom the assault of the outside
world and the taking of her daughter, Lucinda, has crystallized years of
disaffection. Though she is submissive in word and gesture, Eliza’s disgust
at the Prophet’s marital rape—her memories of her wedding night at sixteen,
her escape into fantasies (which, it is implied, have been getting her by for
years)—are indicated by a subtle agitation, ripples of percussion and harp,
that express her state of mind with perfect economy, and the repulsive occasion
is staged with spare good taste. Compare the perfervid scenes of sexual
violation in Floyd’s Susannah, Loesser’s Most Happy
Fella, Ginastera’s Beatrix Cenci, Britten’s
Lucretia. Britten is one of Muhly’s obvious models; so is Samuel
Barber—I departed humming Vanessa’s “In stillness, in silence, I
have waited for you.” But Muhly’s music could not be mistaken for either
Britten or Barber; it is too lush for the former, less melodically giving than
the latter.

Impressed as I was by the aural textures and the skillful mood painting of
Dark Sisters, I felt distanced, confused, by Muhly’s tonal but
astringent melodic language, so ambitiously displayed. There seemed, at least
at first hearing, too eager a sidestep from the easily caught phrase. When not
harmonizing, too many of the vocal lines sounded like recitative sung with
feeling. The varieties of sound and the sheer gorgeousness of the women’s
voices led us eagerly from place to place, but this aversion to anything simple
or basic made the traditional hymn tune “Abide with Me,” when it turned up
in the final scene, unduly attractive, a relief for the ear kept on edge.
Perhaps that was the intention, the composer’s riff on our preference for
neater drama and more melodiously appealing characters—his modern twist on
the adage that the Devil gets the best tunes. For by this time the plot of this
very internal opera had taken some curious turns, one (Eliza’s flight),
foreshadowed and satisfying, others not so easy to parse. The ending is
ambiguous rather than self-righteous or pat; we are satisfied and unsettled at
the same time. 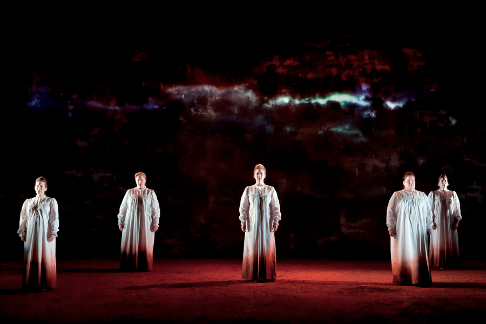 As the opera begins, the women mourn for their children, seized by state
authorities, and from their interwoven mourning individual natures gradually
announce themselves. Their husband, the Prophet, flees to the desert—seeking
communion with God’s messengers, he says—and their discontent is left to
seethe and bicker and recall the past without him. Ruth has lost her children
because the Prophet would not permit doctors to come from outside. Zina is
proud of her new sewing machine, the Prophet’s gift; Presendia resents that
gift and takes her own refuge in art. They pine for their husband and resent
him; they accept the restrictions of their life, the only life they know, but
rebellion simmers. And Eliza, who does not enjoy her husband’s attentions as
the others do, is horrified when she discovers he has promised her
fifteen-year-old daughter to an elderly friend. In Act II, on an amusing, not
too forced parody of a TV news show, a self-important newscaster who clearly
regards the wives as freaks, puts them on screen to discuss their polygamous
plight. The women refuse to condemn their own distinctive lives. Presendia
points out: “It’s not a compound; it’s a ranch … our home! … This is
America! … In some states they let men marry other men!” But Eliza, as we
knew she would, seizes the opportunity to escape.

Stephen Karam’s libretto is spare on action. Instead, he presents the
internal drama of the female protagonists, glancing on all the expected themes
with a blessedly light touch that Muhly has matched: There is just enough
conflict between the wives, not too much; there is just enough sermonizing, not
too much. Nor does Karam oversimplify the issue of what such women are to do
with themselves if they do break free: Where would they go? How are
they to live? It’s no simple matter, and Karam does not brush it off or
assume that we will take a certain side (though of course, most of us
sophisticated, secular opera-goers will).

This is one of the epic stories of our time, and not just for child brides
on a Southwestern ranch. At adolescence, in many societies, girls are given to
older husbands to forge alliances while boys are often “excommunicated,”
banished friendless and unprepared to the world they have been raised to
distrust. Similar tales come from other traditional societies in revolutionary
times: the Hasidic Jews, the Reservation Indians, or the youth of cultures
where women are veiled or circumcised and daughters ill-educated, not daring
not protest traditional decisions. Raised to believe the outside world is
hostile and sexually exploitive (and isn’t it?), they must choose between a
known space with dependable family love and finding the courage to give it all
up for the terrifying unknown. For most individuals so trapped, this is neither
a simple nor an obvious choice. To Karam and Muhly’s great credit, in boiling
such matters down to a 100-minute operatic presentation, they never suggest
that the solutions are simple, obvious or predetermined; they do not slight the
attractions to remain or those of departure. Dark Sisters is not a
snide fable; it is a sincere effort to get under the human skin of the
problem. 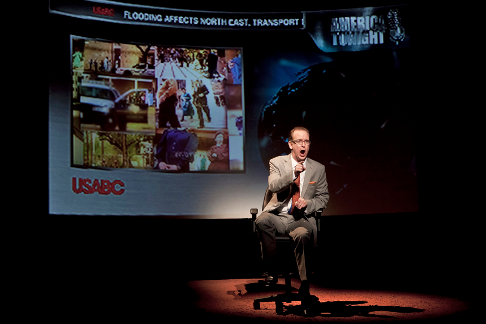 The production design (director Rebecca Taichman, sets and video by 59
Productions, lighting by Donald Holder) might be a textbook for the latest in
multi-media opera (projections, double screens, films within films, lighting in
back, in front, all around), but who ever designed a textbook this beautiful?
The gray lives of the women on their ranch are expressed by their white,
nightgown-ish dresses set between red-brown desert sands and blazing skies, and
their visions of star-filled nights and cloudy, alluring paradises glow.

It would be difficult to single out one of the five singers playing the
Prophet’s wives: Each presented a rounded, individual woman (in defiance of
their near-identical costumes), and their voices were all of them warm,
tactile, filling the theater in glorious interweavings with no hint of strain.
When their voices reached out, as each one did in her turn, we seemed to hear
their separate souls, dutiful or desperate, jealous or exalted or depressed. We
came to know them, from resentful, dreamy Eliza (Caitlin Lynch), miserable,
ecstatic Ruth (Eve Gigliotti), queenly Presendia (Margaret Lattimore), pert
Zina (Jennifer Zetlan), determined Almera (Jennifer Check) and Lucinda
(Kristina Bachrach)—whose real self (seen in Act II) may not be quite the
same as the child of her mother’s fantasies in Act I. Kevin Burdette, in the
two thankless roles of the Prophet and the equally unsympathetic newscaster,
alone did not get a lyrical flight. He bore his deprivation with stoicism. Neal
Goren conducted the orchestra and the complex interactions of instruments with
voices masterfully.

One must mention that the small, handsome Lynch Theater in John Jay Law
School on Tenth Avenue was filled with an enthusiastic and, by operatic
standards, extremely youthful audience. They can’t all have been
classmates of the composer (who is thirty), but they were clearly delighted
with the opportunity to hear the music of a contemporary.