I attended the May 24th presentation of
Don Giovanni — an opera with the subtitle ossia il dissoluto
punito, (or the libertine punished) to which, for this production, I
assign a second: Don Giovanni, ossia la cornucopia traboccata. How
else to describe the genius and talent associated with this production –
beginning with Mozart and Da Ponte, and including Maestro Gustavo Dudamel,
architect turned scenic designer, Frank Gehry, costume designers Kate and Laura
Mulleavy of Rodarte, and director Christoper Alden, but as an overflowing
cornucopia of creativity? Unfortunately, however, this cornucopia was unable to
pour forth its riches, but was compelled to reverse its stream; that is to use
its considerable gifts to fit a great operatic work onto a small stage not at
all suited to opera. That the evening offered pleasure despite major failings, is a tribute to the courage of the Los Angeles Philharmonic
Association and the creativity of the artists who conceived and produced the
work. 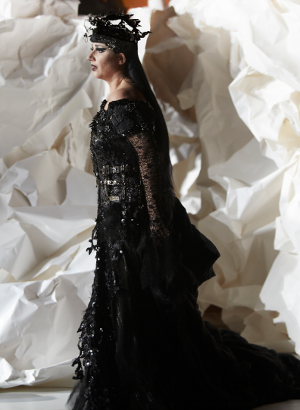 The restrictions that the theater imposed on the undertaking: lack of a
proscenium, lack of a curtain, and only one entrance/exit at each side of the
stage, were formidable. But restrictions in form, content, in fact,
restrictions of any kind, are known to inspire artists to remarkably creative
solutions. Such was the case here- some more successful than others. Entering
the theater, the audience saw a white stage set with mounds of crinkled white
paper and a large white cube. The orchestra was in the process of taking its
seats behind the white set in a completely black environment. The black clothed
musicians were surrounded by what seemed unscalable heights of black crinkled
paper. With the only illumination the lights on their stands, to members of the
audience like myself who could look into the “pit”, it seemed as if the
orchestra was already in a variant of hell.

The singers performed in an ice-bound galactic universe. It turned out that
the walls of crinkled white paper on stage were wheeled, as were various size
white cubes which were rolled about as required by the slimmest white clad
stevedores you ever saw (or were they ballet dancers?) who moved extremely
slowly with precision and grace. Don Giovanni, Leporello, Don Ottavio and
Masetto, were also clad in white, and were clearly chosen not merely for their
vocal talents, but for their appearance in white tights. They wore a variant of
space suits and distinctive sleek and shiny wigs. Don Giovanni’s wig was the
blackest and his shoulder pads the widest. Leporello’s wig resembled that of
Star Trek’s Data. Only the Commendatore wore black — in life and
in death. In his death outfit he could have passed for Darth Vader. 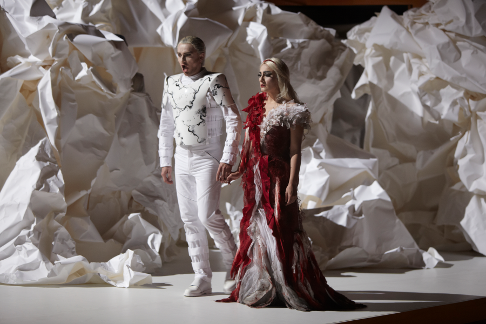 Golden haired Donna Anna was dressed in white in Act 1, and in a similar
white dress stained with panels of red in Act 2. Donna Elvira was assigned long
black hair and sparkling black dresses and head pieces for both acts, which
made her eligible to do the Queen of the Night. Zerlina’s hair was violet,
and her head piece and dress which spoke of youth and spring in Act 1, appeared
despoiled in the second act. No PR article about the costumes omitted the fact
that over 130,000 Swarovski crystals were used for those six garments.

Christopher Alden’s direction seemed designed to overcome the restrictions
required by the exposed and too small stage, and to enhance the fantastic,
dream-like costumes and sets. Don Giovanni approached Donna Anna’s room as
though walking behind a funeral procession. Action was often vertical — that
is all the characters were at one time or another were required to climb up and
down the cubes. Many exits took place in openings in the crumpled paper walls,
or did not take place at all. Characters required to appear in a succeeding
scene often remained “inconspicuously” still in full view of the audience.
Thus Don Giovanni sat atop a cube in lotus position, while other action was
going on. And Don Ottavio, lay as though dead, center stage, until it was time
for him to re-enter a scene. How did this all serve Mozart and Da Ponte?
Surprisingly well in some ways — not at all in others. But first, the
music. 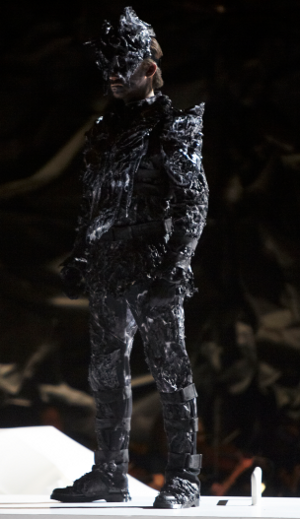 Maestro Dudamel, conducting without a score and without being able to see
his singers (though they could see him on monitors) produced a bouncy overture
and a dramatic, though a more strictly rhythmic reading of the score than is
customary. It troubled me throughout the work that he could not see his
performers, so perhaps I was projecting my own anxiety about this. But I
thought he might be worried about those down beats! If precision between
conductor and singers was not the hallmark of this performance, I was still
amazed at how well they did come together – and at the passion the singers
brought to their roles. Baritone Mariusz Kwiecien, who is said to consider the
role of Don Giovanni as his “calling card,” made an attractive and sonorous
Don. Bass Kevin Burdette’s Leporello was both physically and vocally lithe.
Perhaps because he was costumed as were the other males, in a “space suit”,
tenor Pavol Breslik’s lyrical Ottavio was not the least bit wimpy as so many
Ottavios seem to be. Ryan Kuster was a fine Masetto, and Stefan Kocan’s
appearance and voice as a basalt Commendatore, struck fear in all the
appropriate places. Carmela Remigio, a gifted Mozart soprano, sang the
emotionally complex and musically difficult role of Donna Anna with remarkable
intensity. She also had the most climbing to do. Her bedroom was the top
surface of the tallest cube. Aga Mikolaj, another Mozart specialist who studied
with Elizabeth Schartzkopf, was a heated Donna Elvira. The sweetest soprano
sounds of the evening were those of Anna Prohaska as Zerlina.

Don Giovanni is a social/sexual drama with comic elements. Da Ponte, who
likely modeled the Don on his good friend, Casanova, famously described his own
trysts with a sixteen year old chambermaid, while writing the libretto. In the
“old days” swashbuckling Dons were the rule. The current operatic scene has
incorporated carnal scenes and nudity. Setting this heated, comic and yes,
moralistic work into a small, white universe, created a fascinating tension
between what was being said and sung, and what we were seeing in the
slow-moving icy world before our eyes. Mozart’s warmth and genius made him,
appropriately, the star of the evening. 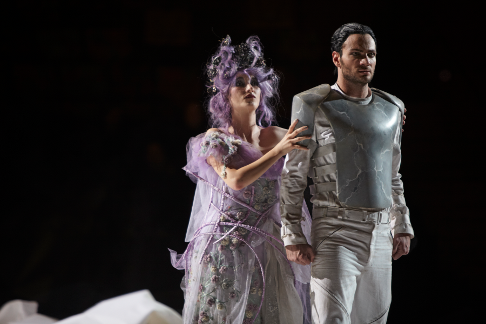 So what didn’t work? The story telling. There were no props; no sword
skewered the Commendatore, Don Giovanni and Leporello didn’t change clothes,
there were no goblets for the champagne aria, no peasants dancing even as the
Los Angeles Master Chorale posted on both sides of the orchestra sang as if
there were. The English titles told the audience of things they didn’t see.
The comic scenes were weak. Audience members unfamiliar with the opera could
not possibly follow the narrative. Indeed, as difficult as it was to obtain
tickets to these sold out performances, many seats were vacant for the second
act.

Still, it is always thrilling to see newly created and newly conceived
productions of familiar works. I’m looking forward to what the Los Angeles
Philharmonic’s next creative team will do with The Marriage of Figaro,
ossia la folle giornata (or the crazy day). It’s a comic opera in which
people jump out of windows and get locked in closets — a charming story —
magical music. I trust that as Los Angeles learns to cope with its concert
hall, ossia teatro dell’ opera, we will see a great show.

All photos by Autumn de Wilde