This is a Salome who is less interested in the bodily pleasures offered by
the pure masculinity of Jokanaan than in the narcissistic celebration of her
own vicious carnality. And, Angela Denoke is just the singer-actress to convey
the princess’s escalating self-awareness and indulgence in emotional
extremities. Denoke, returning as Salome after her performance in the
production’s 2010 revival, may not have had the requisite consistent sheen at
the top, and indeed may have struggled at times to hit the uppermost notes
truly and securely — who wouldn’t given the unalleviated high tessitura?
— but she possesses an emotional sincerity, communicated through an infinite
variety of colours, shades and shadows, which wins the hearts and minds of the
audience. Slightly tense at the start, she went from strength to strength: the
final statement of her insistent demand, “Give me the head of Jokanaan”,
was truly chilling in its honest exposure of human egoism; and in the final
scene, as she cradled the bloodied head of the prophet, at times tender, then
terrifyingly solipsistic, she communicated powerfully the destructive yet
vulnerable self-regard of the eponymous anti-heroine before her thankfully
inevitable death. 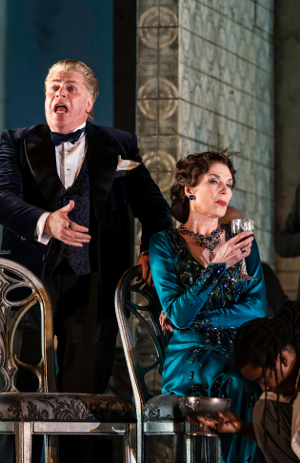 Stig Andersen as Herod and Rosalind Plowright as Herodias

As the ill-fated prophet, subjected to incarceration in the unfathomable
depths of Herod’s subterranean prison, Egils Silins’ bass has the necessary
biblical profundity to lend sonorous weight and resonance to his visionary
pronouncements, which rise through the black grid of internment like clarion
calls to humanity in the face of the wickedness to which it has submitted.
Unfortunately, his perhaps understandably self-absorbed characterisation
resulted in absolutely no erotic tension between Silins and Denoke; nor a real
sense of the prophetic power which might strike such fear in the heart of
Herod. And, as Jokanaan strode back and forth across the stage, fleeing
Salome’s flirtatious advances, one wondered why the guards melodramatically
traced his movements with their rifles given Herod’s command that the prophet
must not be harmed. Surely none would risk such suicidal recklessness?

Stig Anderson, as Herod, used his resonance and power intelligently. There
was no doubting his stentorian dominance and brutality when he unleashed his
full force, but elsewhere his weak hesitancy was effectively conveyed.

Rosalind Plowright was a persuasive, vocally secure Herodias, sufficiently
sumptuous to make her a convincing object of Herod’s desire, but not afraid
to add a touch of roughness or harsh extremity to convey the Queen’s
desperation to maintain her husband’s admiring gaze and her delight in
capitalising on his weakness. Her relationship with her daughter was
appropriately ambiguous.

The minor roles were performed with uniform accomplishment. The beautiful
warmth of tone of Will Hartman’s Narraboth poignantly conveyed the purity of
his transfixion in the face of Salome’s beauty; indeed, the understated
portrayal of his death seemed a dramatic injustice. As the First and Second
Soldiers, Scott Wilde and Alan Ewing were resonant and clear; similarly, Peter
Bronder, as the first Jew, and Andrew Greenan, as the first Nazarene, were
vocally and dramatically compelling. 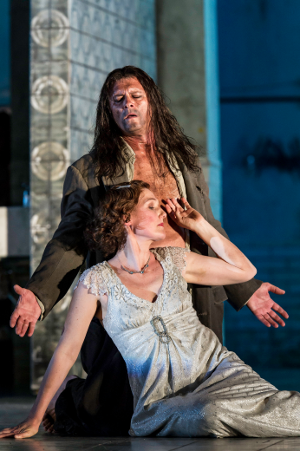 Andris Nelsons conducted the orchestra of the Royal Opera House in a
thrilling, precise yet disquieting rendition of Strauss’s provocatively
extrovert score. Solo lines emerged effortlessly from the luxuriant orchestral
canvas. The seductive harmonies which foreshadow Rosenkavier — employed
therein to depict exuberant sexual freedom, piquant desire and joyful
satisfaction — were here bitterly destabilized by disconcerting instrumental
colours textures and extremity of register, which Nelsons exploited to
perfection. The conductor perfectly balanced measure and excess, liberation and
control. His ability to restrain his naturally exuberant forces until precise
moments of erotic release was nowhere more evident than in the Dance of the
Seven Veils.

There are many McVicarian clichÈs — gratuitous nudity, excessive
blood-letting etc. etc. — but, while some have found some aspects of the
production (the Nazi uniforms of the subterranean warders, for example) unduly
specific and contradictory to Wilde’s somewhat stylised, even mythic,
timelessness, to me they seemed true to the era in which Strauss composed his
opera — when man’s appalling sadism was shortly to be revealed in its full
horror. Es Devlin’s split-level designs — we are afforded glimpse of blasÈ
banqueting diners loftily removed from the debasing debauchery below —
effectively intimate the hypocrisy of the indifferent, and the shared
culpability of all mankind. And, at the close, even the naked executioner
Naaman (Duncan Meadows) is unable to overcome his disgust and turns his back
upon the repellently orgasmic Salome, until required to fulfil Herod’s
command to “Kill that woman!”; savagely breaking her neck, he conveniently
relieves our own disgust and, thankfully, breaks our hypnotic absorption with
Salome’s repulsive yet mesmerising self-glorification.

To some extent it is probably true that modern opera audiences, immune to
the gore, nudity, depravity and gratuitous degeneracy regularly served up by
directors, are largely unshockable. Yet, this listener for one experienced
nauseating terror in the face of the dreadfulness of Wilde’s and Strauss’s
disclosure of humanity’s inhumanity; a terror resulting less from the
gruesome specificity of McVicar’s reading than from its suggestion of man’s
ubiquitous amorality and cruelty — rendered supremely, and ironically, by
Strauss’s painfully beautiful musical portrait. 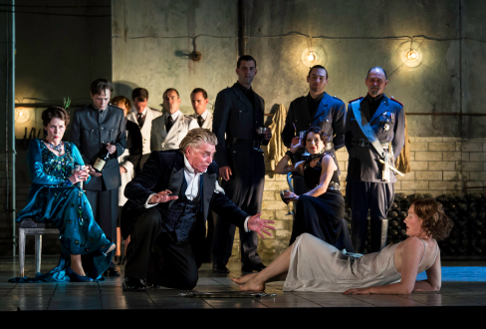 Angela Denoke as Salome, Stig Andersen as Herod and Rosalind Plowright as Herodias