This was amply evidenced by the striking new production of Written on Skin, from composer George Benjamin and librettist Martin Crimp. There is nothing “easy” about this enigmatic work, and yet it is richly rewarding for those who are willing to revel in its intriguing complexities.
The piece is based on a 12th century Occitan legend (oh that again!) but is framed by 21st-century “spiritual” sensibilities as it considers the dynamics of co-dependent personal relationships, life-changing decisions, and mind-altering entanglements. The slender plot concerns a ruthless, rich lord who brutally controls his childishly obedient young wife Agnes. The brute commissions an artist (The Boy) who he welcomes into his house to complete a book of “illuminations” (text and illustrations on parchment = skin). The despot wishes to have his political prowess and domestic “bliss” immortalized in flattering terms.
Instead, the creation of the book incites his wife’s rebellion, which manifests itself in her seduction of the artist. The wife then exploits her intimacy with the visitor and coerces his alteration of the book’s content to expose her husband with truthful revelations of his despicable character and deplorable misdeeds. When the artist candidly (foolishly) documents his passionate affair with the wife, the cuckold stabs him, cuts out his heart and serves it to his unsuspecting wife for dinner. When she is informed of what she is ingesting, she defiantly keeps eating and praising its flavorful taste.
As the husband makes to stab his wife, she runs up the tower and hurls herself off of it, remaining suspended in mid-drop, hovering in one final “illustration” that leaves her between heaven and earth. This slowly unfolding, nay churning of the emotional sub-text makes PellÈas seem a model of cogent expeditiousness. Factor in a trio of 21st century “angels” who periodically offer such contemporary commentary as “erase the Saturday car-park from the market place,” and you have a richly enigmatic, Pinter-esque concoction. And perhaps its vague juxtaposition of images is its greatest asset since it not only commands our rapt attention, but encourages us to speculate. I was riveted by the performance from first to last.
This was owing in no small part to Mr. Benjamin’s hauntingly beautiful score, with its layers of orchestral colors and unusually grateful vocal writing. The composer also presided on the podium, eliciting thrilling results from the Netherlands Chamber Orchestra. The group met every challenge of this opaque work’s masterful orchestrations. Although there are many influences evident in the musical results (Britten, Messiaen, Berg, among others), Benjamin has found his own style, and his own palette of effects, one that includes vocal lines meant to please the ear, and not just the intellect, as in many another contemporary opera. 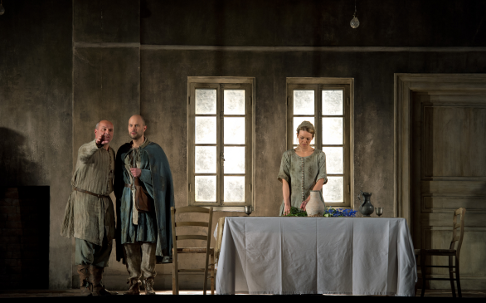 Christopher Purves as The Protector, Bejun Mehta as Boy and Elin Rombo as AgnËs
The singers were uniformly first-rate, starting with Christopher Purves who scored a tour-de-force with his nuanced impersonation of the Protector. Mr. Purves is possessed of a powerful, incisive bass-baritone that was supremely well-controlled. Even when his character was called upon to snarl or bark musical statements, Mr. Purves kept his instrument focused and refined. He was also capable of meaningful introspective musings, and colored his voice with menace for bone-chilling, sinister insinuations.
Bejun Mehta proves yet again why he is numbered among the top echelon of current day counter-tenors. From his first long sustained note that slowly built in volume, he regaled us with beautifully modulated singing that had all the richness of a resonant viola. Mr. Mehta not only has uncommonly fine diction, but also has an unusually wide range of colors in his warmly ingratiating instrument. Bejun found a perfectly judged obscurity as the Boy, with his physical abandon Flower-Child-like in its naivetÈ. After his demise, the Boy returns as an Angel, an apt metaphor since Mehta sang like an angel all night long.
Lovely Elin Rombo scored all the right dramatic beats as the dominated wife. Her reliable, gleaming soprano was used with great skill and absolute service to the writing, and Ms. Rombo was equally effective whether whispering hushed exchanges, wringing out every bit of pathos from arching flights above the staff, or forcefully propositioning her pliable house guest. Her cool, even vocal delivery after she learns what (or rather whom) she is ‘eating’ was a model of control.
Victoria Simmonds was a firm-voiced Marie (Agnes’s sister) and she made a substantial contribution to the ensemble as Angel 2. Allan Clayton was quite fine as Marie’s husband John, and his suave tenor made a memorable impression as Angel 3. Although not credited, the concentrated work of several added supers was important to the milieu of the concept.
And the production’s “concept” provided quite a massive, spectacular architectural setting that was at once solidly realistic, and nebulously spiritual. The brilliance of the visual realization was that it managed to suggest a green room, wings, a fly loft and stage performance space while at the same time suggesting limbo, heaven, and most certainly, hell. A sturdy two story structure, the ground floor left contained a period drawing room out of some austere Dutch Masters painting flanked far left by a moody grove of trees. Through the room’s stage right door was a brilliantly white “green” room, or waiting room, or dressing room, or…well your take is as good as mine. 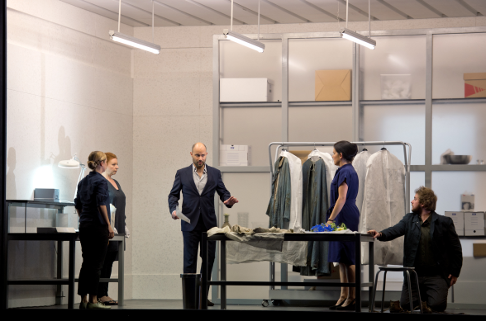 Bejun Mehta as Angel 1, Victoria Simmonds as Angel 2 and Allan Clayton as Angel 3
Upstairs, the trees have burrowed upward through the left floor, a dated ante room center has a window that opens on the great outdoors, and a white ‘office’ on right suggests a corporate nerve center as easily as it implies ‘heaven.’ The married pair are clad in time neutral interpretations of medieval garb while the Angels trade off contemporary business wear for their period attire as required. Vicki Mortimer’s thought-provoking set and wholly appropriate costumes were masterfully lit by Jon Clark, whose brooding color choices were integrated into a lighting design which perfectly balanced tight specialty spots, moody washes, looming shadows, and pointed brilliance.
Best of all, director Katie Mitchell was able to knit together the many (deliberately) disparate dramatic conventions into a convincing, unified whole. Mr. Crimp’s libretto is an especial challenge since characters often speak of themselves in the third person, and recite stage directions even as they perform them. It is to Ms. Mitchell’s great credit that far from distancing us from the soul of the tale, her stagecraft intrigues us, envelopes us, consumes us.
When characters are emotionally spent at the end of selected scenes, they shrink or collapse into the waiting arms of the omnipresent stage hands/angels/supers, to be comforted even as they are moved around like another stage property to be re-set in its proper place. I cannot remember the last time I have been so engaged by such overt theatricality from both writers and producers. Katie has also managed to draw incisive, highly charged character relationships from her cast, and the whole is meticulously paced, blocked, and coached.
I shall not soon forget the coup de theatre at opera’s end as the misused wife flees her murderous spouse up a white staircase extending into the loft, running to leap to her death, pursued by the rest of the cast, all in excruciatingly. Slow. Motion. Ironically, this is one of the few instances where the production fails the script since it calls for her to leap but be suspended mid-air, but then who has ever seen Br?nnhilde ride Grane onto the pyre? (So there.) Never you mind, it is spell-binding nonetheless.
Written on Skin was that all-too-rare treat, a compelling new piece of writing that spoke with its own affecting voice, performed by a peerless cast and band, matched by an enthralling stage production that served to make for a potent evening of musical drama. Here’s wishing it many more successful first nights and an enduring presence in the repertoire.
James Sohre