How was the singing and
conducting? It’s hard to know. In such productions, the direction is the topic
of interest.

Countering this trend, the Los Angeles Opera Company’s second presentation
of its season was a plain though not simple Don Giovanni. The production,
borrowed from Lyric Opera of Chicago, was created for that company’s 50th
anniversary season in 2004, by the much-hailed German director Peter Stein with
a view to adhering closely to Mozart’s music and Da Ponte’s words.

Although there’s hardly an opera that doesn’t — like Don Giovanni
— have love, sex and death at its core, it is Da Ponte’s unique libretto that
has allowed this centuries old work to become a kind of touchstone of an era’s
cultural tastes. It’s title — Il Dissoluto punito, ossia Don Giovanni —
dramma giocosa — “The Profligate Punished or Don Giovanni — a
playful drama” tells us that we will first see a a man’s nasty behavior, then
see him punished, and that we’ll have a good time watching it all. And sure
enough, when the curtain goes up we witness a scuffle after a probable rape,
followed immediately by a murder. Subsequently we are exposed to two acts of
the protagonist’s unrelenting reprehensible conduct, with some laughs thrown
in. At the very end we see him get his supernatural comeuppance, and are
treated to a fairly merry fugue — a sort of victory song.

“I hate shows where the director is onstage,” Stein is quoted as saying.
“I want to follow the intentions of the author as far as I can understand
them.” And follow Mozart and Da Ponte he did. Rather than drag Don
Giovanni into the 21st century, Stein’s production takes its audience back
to the time of the opera’s creation, and allows us to see and hear what Mozart
and Da Ponte were trying to tell us about the characters’ words and hearts.
Although Stein did not direct the Los Angeles production, director Gregory A.
Fortner led the cast in a lively and well paced performance which illuminated
the complex interactions between the characters.

The plain, and least attractive aspect of the production are the minimal,
flat looking sets that featured occasional cutout doors and windows, and a tiny
balcony that had me fearing for Donna Elvira’s safety. None of it looked like
it was taking place in Spain. Fortunately, the music making was bright enough
to light the stage. As Don Giovanni, Ildebrando D’Arcangelo was a slim legged
graceful, amoral seducer. His resounding bass-baritone, which reflected his
enthusiasm for the role, faltered only once in a surprisingly listless “Fin
ch’ han dal vino.” Bass-baritone, David Bizic, making his American and Los
Angeles debuts as Leporello, was a perfect partner. The two have played these
roles opposite each other and it shows. Joshua Bloom, a young Australian bass,
also was making his Los Angeles debut, was a properly bumptious Masetto. And
Ievgen Orlov, yet another bass (it may surprise you to know that this dramma
giocosa features four major bass baritone roles) had the requisite depth and
darkness to cause chills in his last encounter with the Don. In the role of Don
Ottavio, one of the more thankless in opera (two gorgeous arias, and mostly
stand around) tenor Andrej Dunaev, another debutant with the company,
demonstrated some lovely legato. The three female roles were equally well
filled. Californian Juliana Di Giacomo, making her LA debut as Donna Anna,
displayed the grim seriousness and easy coloratura necessary for the role.
Finnish soprano Soile Isokoski’s silken soprano and acting made her an almost
lovable love stricken Donna Elvira. Mezzo Roxanna Constantinescu was
appropriately pert and charming as Zerlina. 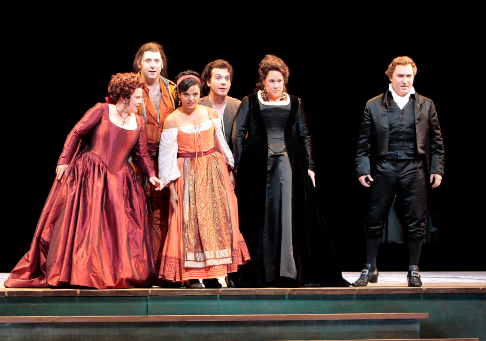 For all the wonderful acting and singing, one of delights I have in seeing
Mozart conducted by James Conlon, is watching him lead vocal ensembles when the
soloists are stage forward. Conducting without a baton, it is a joy to follow
as he weaves their voices into a gleaming musical fabric.

Quibble department? Only about some excessive humor, particularly a moment
when Don Giovanni and Leporello exchange clothing and comically respond to the
odors of each others’ garments. It’s a neat touch, but causes outright audience
laughter that drowns out the first phrases of Donna Elvira’s “Ah taci,
ingiusto core.”

I attended the September 30th performance of Don Giovanni.
Performances on October 10 and 14 will be led by Pl·cido Domingo, with Angela
Meade and MicaÎla Oeste, making their Los Angeles Opera debuts as Donna Anna
and Zerlina, respectively.