Not just good opera but great opera took stage at the last night in San Francisco, adding new found artistic luster to the brutal conflicts of the Capulets and the Montagues. The pretended death of Giulietta was exquisitely suffered both by Bellini’s Romeo and his rival Tebaldo, and ultimately emotional pain of monumental musical intensity and ineffable sweetness melted into the tragic release of the love-death. Near legendary mezzo Joyce DiDonato hand in hand with soprano Nicole Cabell walked triumphantly into the beyond.
It was real, this beyond. It was in fact the proscenium frame, at once the Romantic love-death itself and, Mme. DiDonato and Mlle. Cabell left standing in front of the fallen curtain, it was opera. The enraptured audience leaped to its feet and roared.
Giulietta, tragically denied true love (this is pristine Romanticism), had literally climbed the wall. Standing on a sink, the lone symbol of a physical world, balancing herself eerily on one foot, she reached up towards an unattainable suspended image of entwined lovers and floated vocal lines that soared and fell with suspended emotion in what seemed a musical eternity (uhm, this is high, very high Romanticism).
These scenes, the tragic ones, occurred in a space with a mirrored floor negating all sense of physical gravity. There was no reference to defined space save one vertical line that created a sort of metaphysical reality, a line that was always the same and never the same, clothed in an infinity of changing color, the ebb and flow of love. The stage, drawn by French designer Vincent Lemaire and lighted by Italian designer Guido Levi, provided an abstract space for love, may we say, with the Romantics, the most abstract world of them all.
In these scenes director French Vincent Broussard used an almost framed painting, though with vaguely defined, mostly abstract images that suspended the search for specific reference. However in the larger scenes with public meaning he completed the proscenium frame across the bottom of the stage making it the fully formed image of a physical painting. It became a real space with a background of infinitely ascending steps on which brilliantly colored and lighted courtiers spread themselves, and later the elaborately clothed, now disheveled women descended, remnants of the unseen defining battle. Mr. Broussard landed squarely on a descriptively minimalist language that could elevate this simple story to Bellini’s metaphysical world of music. 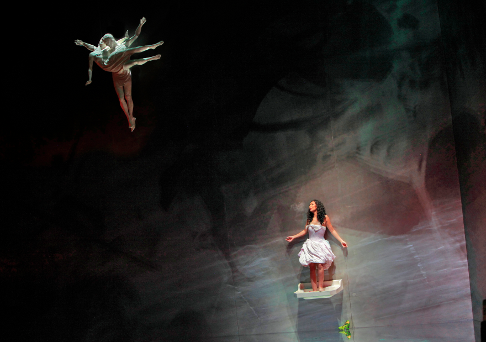 Nicole Cabell as Giulietta
The most astonishing scene was Giulietta’s passage in her underclothes across the sharp and treacherous lower edge of this worldly frame as she sought to resolve her plight, and did so finally with the help of Lorenzo, the family physician (Felice Romani was far more practical that Shakespeare who complicated matters by appointing a priest to this task). Or was it Romeo’s address to the sleeping Giulietta, now no longer laid out on her wedding dress but frozen upright facing Joyce DiDonato who was fully possessed vocally and physically by Bellini’s music.
There was no separation between the pit and the stage, the changing stage pictures themselves almost seemed the black printed notes of Bellini’s score made into extraordinarily beautiful sounds by Italian conductor Riccardo Frizza and the San Francisco Opera Orchestra. This maestro achieved the exquisitely delicate and felt Romanticism that makes Bellini the epitome of such difficult, elusive and rare operatic art.
It was a nearly phenomenal achievement in bel canto. Like all great opera it was a collaboration of huge forces. The fine Albanian tenor Saimir Pirgu gained vocal security during the evening to viably take on the incomparable Joyce DiDonato in their confrontation. The brilliant Nicole Cabell as Giulietta in her defining long black wig found an unerring vocal balance that did not falter in confronting the extraordinary directorial demands of this role. 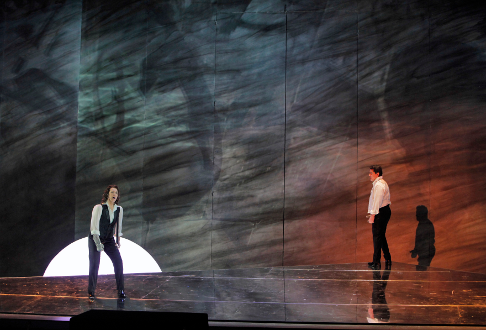 Joyce DiDonato as Romeo and Saimir Pirgu as Tebaldo
The high-style costumes designed by famed French couturier Christian Lacroix forcefully etched heightened supernatural character with a sophisticated sense of once-upon-a-time. The actual set became a canvas on which lighting designer Levi detailed mood after mood, choosing momentary detail that rose to the emotional surface in the shadowy supra-rational state of consciousness, never permitting a face or voice to destroy the complex metaphysical tonalities of the production.
It was an enthralling evening at the War Memorial Opera House, the ovations were enormous. And, yes, metteur en scËne Vincent Broussard braved exuberant booing at his curtain call. Go figure.
Michael Milenski