Think bel canto. Give a singer an impossible situation and see if he can sing his way out of it. Moby Dick in San Francisco was about singing, and well, the singers had those famous ready made situations that frame Melville’s deeper discussion, and they sang and sang. And sang.
Composer Jake Heggie has a gift for lyricism that flows and flows. And flows. In San Francisco he had very willing interpreters, most notably tenor Jay Hunter Morris, a late term replacement for heldon tenor Ben Heppner who had sung the doomed and damned Captain Ahab in this premiere production of the opera two years ago in Dallas, and this year already in Calgary and San Diego. 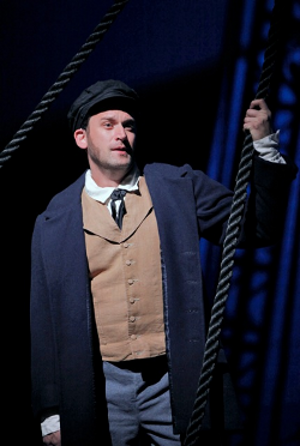 Morgan Smith as Starbuck
Maybe for a second or so one regretted the absence of Mr. Heppner, surely the epitome of casting for Melville’s emblematic monster. But Mr. Morris, a smaller scale performer with a more lyric voice, and luckily for Mr. Heggie one of great stamina, immediately commanded a character of some interest who had the impossible task of towering above mutiny, slaughter, hurricanes, human kindness and one white whale. He delivered Mr. Heggie’s very singable, if not easily hummable, lines with aplomb and musical grace.
First mate Starbuck, endowed in this made-for-opera version of Melville’s story with the daunting task of equaling Ahab in emotional stature, fared less well. Baritone Morgan Smith successfully made the case for onshore domestic contentment but could not find the needed torment and agony in Mr. Heggie and librettist Gene Sheer’s character — the only antagonist in the story, the only character asked to tackle the obsessive captain. Maybe he did not have enough words to sing or maybe Mr. Heggie’s music simply does not plumb those depths.
Librettist Sheer ends his book with the line “call me Ismael,” famously the first line of Melville’s book, a conceit that invites us to go to novel to sink ourselves into its archaic language and delve into its meanings, an immersion that Moby Dick the opera eschews. And the question then looms as to what Moby Dick the opera may have to do with anything beyond smart entertainment ‡ l’amËricaine.
Smart it is, a libretto that cleverly abstracts the shell of the novel into a series of musical numbers. The staging by Leonard Foglia (who helped shape the opera) is presentational, generous doses of rushing forward to point to happenings exactly where the audience happens to be sitting (a sure way to ensure involvement). 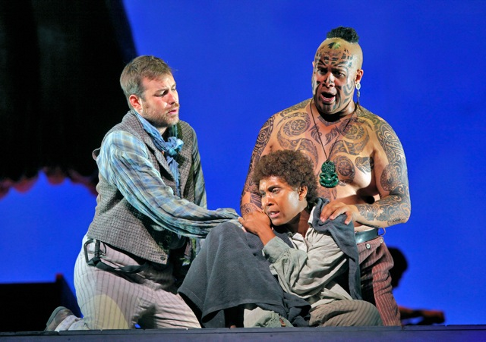 Stephen Costello as Greenhorn (Ishmael)
Designer Robert Brill made a huge wave like structure on stage that cleverly embodied the sea itself and he made smart use of sophisticated moving projections to graphically illustrate a gigantic moving schooner and its boats. Not to mention the effective fight scenes by choreographer Keturah Stickann and fight director Jonathan Rider.
The Moby Dick saga surely attracted composer Heggie because of its opportunities for programmatic music. These five or so episodes were the most successful parts of the opera. Lacking the complexities of nineteenth century morality afforded by written language the scenes that illustrated the plights of Melville’s famous characters were sometimes dramatically pallid, limited by the consistent richness of smooth sound and rhythmic movement, essential elements Mr. Heggie’s voluptuous style. It is smart, attractive music that in actuality is quite complex harmonically and rhythmically.
Greenhorn (Ishmael at the opera’s conclusion, though it is his name throughout Melville) who begins and ends the opera is the classic outcast, and in the opera he becomes innocence as well. The role was beautifully sung by tenor Stephen Costello though the role would have been more effectively served by a less Italianate voice (Italian tenors are never innocent), perhaps a purely beautiful voice could have moved us more in his extended scenes with the savage Queequeg, effectively typecast with Samoan bass Jonathan Lemalu.
There is one female voice in the cast, Pip, the black boy, sung by soprano Talise Trevigne. Pip is thrown out of the whaling boat in Moby Dick the opera (he twice jumps out in the novel) and then does the Mary Martin Peter Pan trick of flying, suspended, across the stage while singing and here going crazy too. In the opera Pip is cleverly paired in an extended duet with Stubb the Second Mate, sung by veteran baritone Robert Orth, obsessed with killing whales. Pip is his victim, a sacrifice in the rites of men, at least those portrayed in Moby Dick the opera.
Committed and convincing performances by all the named roles and by the San Francisco Opera Chorus were the hallmark of the production, by now nearly a classic. Conductor Patrick Summers gave Heggie’s score its intended luminous glow ensuring that Moby Dick the opera remain a rich theatrical confection.
Michael Milenski