Somewhere in the heated imagination of director David Alden there may be a
convincing production of Verdi’s Januslike masterpiece, Un Ballo in
Maschera, part Italian barn-burner and part French operetta.

In this new production, Alden’s considerable talents did not come to the
fore until Act Three, Scene One. This is where Renato, counselor to King
Gustavo III of Sweden, confronts his wife Amelia. She has been unfaithful to
him by loving the King from afar. The King loves her in return, but the two
have never managed to consummate the relationship, this being an opera.
Betrayed by both his King and his wife, Renato, heretofore a loyal lieutenant,
is in a murderous mood. 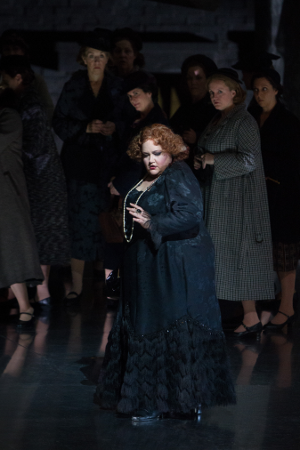 For this grim scene Alden and set designer Paul Steinberg reduced the
playing space on the enormous Met stage to a small box that is all angles with
a stark black and white color scheme. The ceiling slopes down at a vertiginous
angle. The walls close in on the emotionally tortured couple as Renato says he
will kill her; he then swears vengeance on the King.

Baritone Dmitri Hvorostovsky as Renato and soprano Sondra Radvanovsky as
Amelia are both fine actors, so Alden had much to work with in this scene. He
introduced an element of sexual tension between the couple — a hint that
Renato would take her in violent sex one last time before killing her.
Hvorostovsky handled her roughly, lending a particular urgency to their
singing. When the two conspirators (the Counts Ribbing and Horn) assisting
Renato in the assassination plot suddenly appeared through a back wall of the
boxy set, the effect was chilling.

Had the entire production been at this level, the Met would finally have a
hit Ballo. But it was not.

Alden told the opera website Parterre Box that he sees King Gustavo
as “a dreamer and a fantasist.” This is the inspiration for his conception.
To demonstrate how out-of-control the King is, Alden compares him to Icarus,
the mythological boy who disregards the advice of his father and flies too
close to the sun. An enormous mural showing Icarus falling into the sea is a
constant presence in the production.

This choice is banal. Indeed, Alden bristled when Met General Manager Peter
Gelb used the word “obvious” for the Icarus image in an intermission
interview. Gelb backpedaled furiously from this honest assessment as soon as he
realized Alden’s displeasure. But it is obvious, and boring, and it adds
nothing to our understanding of Verdi’s conception.

Alden has directed this dreamy fantasist of a king as a goofball from a Marx
Brothers film. He laughs a lot (some of which is in the music). He yearns, he
swoons, and he waves his arms. But he is never credible as a strong king
beloved by some of his people and hated by others. The tragedy of his doomed
love for Amelia never registers. 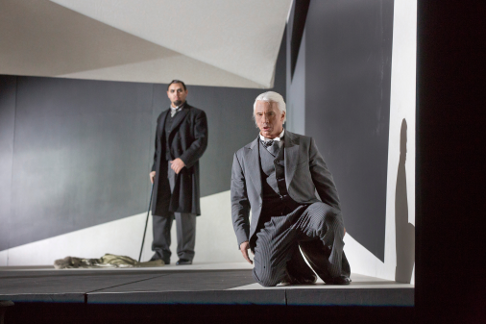 Alden has imposed no other vision than this on the opera. Is it at heart a
political drama about the assassination of a tyrant, or the assassination of a
good man by his enemies? If so, why are the conspirators Ribbing and Horn
almost invisible in this production until Act Three? Or does Alden see
Ballo as simply a tragic love triangle with a political backdrop?

Alden’s stage pictures (with the exception of Act Three, Scene One) are
designed to heighten the fantasy. They are by turns risible or puzzling:
dancing waiters; an Oscar (the loyal page to the King) who flaps her own Icarus
mini-wings (talk about obvious) and smokes cigarettes; courtiers in brown
trench coats; and the King slumming in a fisherman’s sweater topped with a
royal ermine cape seemingly cadged from a Salvation Army store.

So it was left to the singers to make some sense of this hodgepodge. They
did so with mixed success.

Hvorostovsky, one of the world’s leading Verdi baritones and a matinee
idol with his shock of perfectly groomed white hair, brought a gravitas to the
proceedings that was sorely lacking. It was hard to imagine that such a serious
man could be counselor to this frivolous king. Hvorostovsky delivered both of
his major arias with power, particularly “Eri Tu” in Act Three in which he
hurls invective at a portrait of the king. He and Radvanovsky were believable
as a couple in serious need of marriage counseling.

Radvanovsky spent the entire opera looking anguished. She is most effective
when singing quietly. She floated some beautiful notes at the end of her Act
Two aria as she searches for some magic herbs to rid her of her feelings for
the King. When she sings at a mezzo forte or forte, and at
the top of her range, she is somewhat raw. But she is an honest artist, and she
did her best to make sense of the enigmatic Amelia. Her duet with the King in
Act Two when they acknowledge their forbidden love was electrifying, and it
received a huge ovation.

As the King, tenor Marcelo Alvarez was badly in need of better direction
from Alden. He is not a natural actor. Playing an unstable character trying to
fly away from his royal duties is not easy to do. Alvarez could not pull it
off. The intrusive close-ups of the HD telecast didn’t help convince the
audience that there was much of anything on his mind. 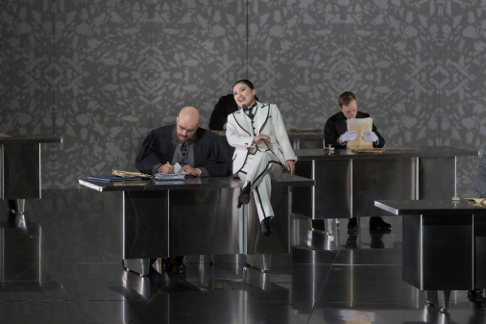 Mark Schowalter as the Judge and Kathleen Kim as Oscar

The middle and top of Alvarez’s voice remain solid and exciting, but he is
losing the low notes, and he clipped some of his phrases. Powerful as it is,
his voice is a bit characterless. It’s hard to keep his basic sound in mind.
This was not a performance to put alongside Tucker or Peerce or Bergonzi, not
to mention Pavarotti.

Kathleen Kim has given impressive performances at the Met as Olympia (in
Hoffman) and Zerbinetta (in Ariadne auf Naxos). She has lost
some of the agile, silvery quality to her voice, however. Perhaps her stint as
Chiang Ch’ing in Nixon in China changed her instrument. Oscar, a
character drawn from French operetta tradition, must be sung lightly, with
humor and great agility. Alden worked against the happy sound of Kim’s arias
by making this Oscar menacing. She wore a mustache and goatee, smoked, and
flapped her wings. Alden also suggested that Oscar was not even faithful to the
King; she was a witness to the assassination plot and clearly knew the King was
a marked man. Yet she did nothing to stop it. All this undermined Kim’s
performance.

The stentorian mezzo Stephanie Blythe delivered her usual blast-furnace
performance as the fortune-teller Ulrica. No production concept can undermine
this artist.

As Fabio Luisi conducts more Met performances, his strengths and weaknesses
are starting to come into view. The Met Orchestra played with precision. His
tempos were fleet. Everything was tidy, and spot-on. But, although he is
Italian, this performance lacked an Italianate throb. He didn’t give his
singers much room to just run with it. As a result, the performance was highly
professional but cold. Listen to the CD of a live Ballo at the Met conducted by
Dimitri Mitropoulos (available from Sony and the Met). It’s a bit reckless,
but the Greek Mitropoulos is more Italian than Luisi, and his performance
crackles with electricity. Luisi’s merely hums with efficiency.

Director Elijah Moshinsky’s 1980 Met production of Ballo seemed
to be set in a sauna. Now this. Is Ballo really that hard to pull off?

This
review first appeared at CNY CafÈ Momus on December 13, 2012. It is reprinted
with the permission of the author.

Photos by Ken Howard courtesy of The Metropolitan Opera