No surprises here, it was the Laurent Pelly production that originated in 2005 on a small stage in Lausanne before moving to Lyon’s OpÈra Nouvel. Just now its seemingly countless animate components have been transformed to a new production of the scope to inhabit Barcelona’s Liceu and San Francisco’s War Memorial. And it is still a living organism with its own intelligence. Maybe it is even smarter than Offenbach.
Not that Offenbach has not gotten a lot smarter over the years, subject to the scrutiny of researchers, scholars, editors, not to mention those who have finished, fixed and improved the mess that Offenbach left behind. Finally stage directors have the task of actually putting it on the stage in some fashion they think is coherent. And the fun continues.
Strange to say this potentially magnificent work has come to the War Memorial stage in but two earlier incarnations, a 1944 version repeated in 1945 and 1949, and a 1987 version directed by Lotfi Mansouri. Christopher Alden directed a 1996 version that was mounted in the Civic Auditorium because the War Memorial was closed for earthquake repairs. This production was based on the artistically correct, read de rigueur Michael Kaye and Jean-Christophe Keck edition as rendered in a 1993 production at Long Beach Opera directed by David Alden.
The Kaye-Keck edition is of course the basis for the 2005 Pelly production, with Lausanne and Lyon’s own particular blend of non-Offenbach recitatives and dialogues. Needless to say seven years later Laurent Pelly has rethought it a bit for Barcelona, and now it is further adapted for San Francisco. You get the idea. We could get lost in detail.
Pelly’s production is magnificent, making E.T.A. Hoffmann’s short horror stories into a dream fantasy where anything real becomes surreal, where anything physical is ephemeral. There is no time because there is no place. Images appear and disappear without a logic, as stream-of-unconscious.
Pelly’s conceit is based on the Olympia episode, on Spalanzani’s mechanics where magic dissolves into stagecraft when Olympia is revealed as a manipulation of three stagehands. We then become conscious that the continuous flow of images is effected by the most basic level of stage mechanics — men pushing scenery and men pulling ropes. And we become even more amazed by the intelligence behind the when and how of it all. 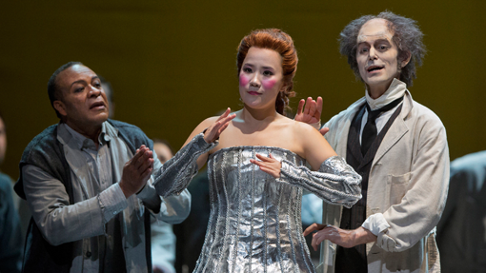 Steven Cole as Cochenille, Hye Jung Lee as Olympia and Thomas Glenn as Spalanzani
It is a diabolical staging in an opera where there is nothing but diabolical manipulation of, uhm, nothing. Something like quantum mechanics maybe.
There is the glue that holds all this together, and that is mere Offenbach, the minor genius who was a major genius, who made trivial musical magic into powerful emotional statements. Conductor Patrick Fournillier realized this Offenbach utilizing the ample voice of the San Francisco Opera Orchestra, exploiting thought rather than sentiment by driving fast tempos, emotion rather than atmosphere by probing depth of tone — assignments this formidable orchestra relished. The pit had a big job indeed. It had to supply the colors, abstract and real, that the essentially dark monotone set left undefined. It succeeded.
And there is the lubrication allowing the Pelly mechanics to flow. This of course would be the voices of the actors. American tenor Matthew Polenzani had the daunting task of making us feel the pain of the destruction of illusion. It is a lot of singing, and he made it to the end with apparent ease. Mr. Polenzani is a light lyric tenor, a voice that does not boast the strain that makes a large-scale lyric tenor exciting. Though a beautifully acted performance, and in fact a beautifully sung performance it did not propel us to confusion, disillusion and exhaustion, the fulfillment of Hoffmann’s love.
Matthew Polenzani is a star, not to forget Laurent Pelly, so it is inexplicable why San Francisco Opera felt it needed an additional star to illustrate its aspiration to be a big-time opera company. Soprano Natalie Dessay sang a waif-like Antonia, the only one of the heroines this estimable artist can still negotiate. She did deliver vocally with sure, proven technique. Though if there are to be three sopranos for the opera, one would surely prefer a full lyric for this role. Mme. Dessay did give us the very real pleasures of a diva presence and crystal clear French. 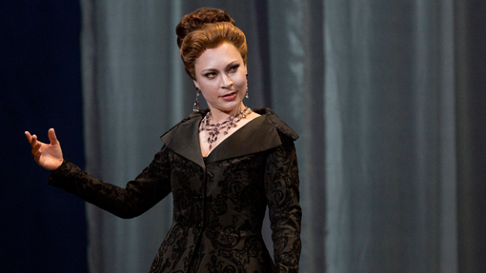 Irene Roberts as Giulietta
There is great pleasure to be had in hearing young singers with beautiful, well-used voices. Bass Christian Van Horn, last fall’s Angelotti in Tosca, almost held his own in fulfilling the star quality needed for the four villains. Soprano Hye Jung Lee of Florida Grand Opera’s Young Artist program was adequate as Olympia. Giulietta was Irene Roberts who was Fresno Opera’s Carmen. Angela Brower, a member of the Bavarian State Opera ensemble disappointed as Nicklausse, lacking the requisite richness of voice for this trouser role and necessary presence to hold the stage for such an extended period of time.
Casting of the myriad of additional roles ranged from star turns, like the casting of Steven Cole as the four servants, to the pallid Spalanzani of Thomas Glenn and lackluster Crespel of James Creswell. The Adlers did their usual fine service in other roles, especially Hadleigh Adams as Schlemil.
The Pelly production needed more powerful presences all around to liberate our minds and hearts from its brilliant stage mechanics and allow its devilish design to take flight. The San Francisco Opera Orchestra alone could not accomplish this. It could have been done.
Michael Milenski