Much of this is owing to director Stefan Herheim’s growing reputation as a fascinating stage director, and the fact that this marked his debut in the UK, a country that has taught the world a thing or two about great theatre. Mr. Herheim’s riveting staging was indeed cause for celebration, but first it must be said that conductor Antonio Pappano arguably eclipsed every other achievement with so exceptional a reading of Verdi’s least appreciated mature opera.
“Passionate.” “Heartfelt.” “Electrifying.” These seem to be puny adjectives indeed to summarize Pappano’s achievement. “Definitive” might be the word. If the superlative ROH orchestra seemed to be on fire the whole night, it was Maestro Pappano who struck the match. Not only was his well-shaped performance idiomatically apt, characterized by breadth and power, but also his consummate uses of accelerando and rubato, at one with the singers, lent spontaneity and inevitability to the music-making that made us feel as if we were hearing it for the first time. The thundering ovation the orchestra and conductor received at curtain call was testament from an audience that knew they had just been gifted with a very special night at the opera. 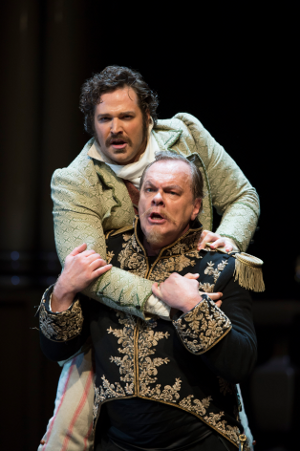 Micahel Volle as Montfort and Bryan Hymel as Henri
Les vÍpres siciliennes is probably no one’s favorite Verdi. In spite of some glorious stretches, there are segments that are reminiscent of more successful prior Verdi, or portents of even better Verdi to come. When we encounter this piece at all it is usually in its Italian version (I Vespri Siciliani). Well, what a difference the language makes. Every principal artist is here flattered by the French pronunciation, which favors a slight cover and softness (over the brighter Italianate delivery). And what a privilege that we have a cast that can so memorably deliver the goods.
Pride of place must go to Michael Volle’s exquisitely wrought Guy de Monfort. Having greatly admired Mr. Volle in German opera, nothing about his prior achievements prepared me for the depth and power of the impression he made in this role. The language suits his mellow (yet substantial) baritone to a “T” and he explores and deploys an entire range of colors and emotions from the very bottom of the role to the extreme top. There was not a note he produced that was not fraught with great detail, no phrase that was not informed with emotional nuance. He did not so much sing the part, as live it, and Michael quite simply stole the show. Nor was he alone in his success.
Brian Hymel has come a long long way since I first admired his promising Faust at Santa Fe. His mastery of French styling is evidenced by his triumphs in ever more challenging assignments on world stages (to include ROH). Mr. Hymel seems to have become something of a ‘local hero’ owing to his having saved a production or two by stepping in on short notice. But just being ‘available’ would not be enough in these heady surroundings. His utterly secure, freely produced top gleams and sails into the house with power and brilliance. He has learned well to use forward placement and pure, limp production to make the voice meaty in the lower passages. With skill and artistry the tenor has grown into ‘the‘ leading exponent currently performing this repertoire.
As a lovely HÈlËne, Lianna Haroutounian filled in for the previously announced Marina Poplavskaya (who was ill). Ms. Haroutounian is the real deal, a true spinto voice that can meet all the Verdian demands, and boy do we need her now! Her shimmering, golden tone could serve up melting phrases and anguished outbursts alike. The glowing top register was complemented by a middle with good presence, and a ringing chest voice.
If the soprano fudged a little with her opening coloratura, and dragged the “Bolero” ever so slightly to negotiate the tricky leaps and turns, many another great interpreter has similarly negotiated these challenges. A major emerging talent, we will be proud to say we knew her ‘when.’ 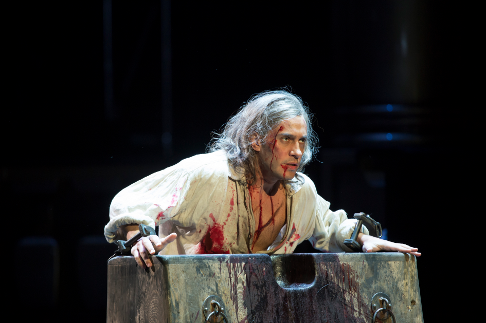 Erwin Schrott as Procida
As Jean Procida, Erwin Schrott often effects a big, take-no-prisoners vocal delivery which makes for good theatre, to be sure, but also invites uneven vocal production. While I admired his overall performance and enjoyed many statements and phrases, Mr. Schrott did not always succeed in marrying up his placement and his intent. “Et toi Palerme” was wonderfully varied, but the well-intended ebb and flow nonetheless exposed the singer’s somewhat weak legato. He was on firmer footing when his genial bass was more conversational in delivery, although I would urge him to moderate his dramatic instincts to pulverize climactic notes which can veer a mite off pitch. Still, Schrott is a mesmerizing performer and he wins the Nathan Gunn Award for getting to display his well-toned pecs in the prison scene.
As one would expect at Covent Garden, all of the minor roles were polished and poised, but I particularly enjoyed Jihoon Kim as Robert. This promising young singer is a Jette Parker Principal artist, and ROH is right to place such confidence in him and to nurture a performer of such accomplishment and real individuality. His rolling, dark bass surely has a bright future.
So what of the ‘controversial’ Stefan Herheim, whose leadership caused so much speculation, anticipation, and in some quarters, concern? In general terms, I find Mr. Herheim to be a serious director who does clean work. Not for him the easy way out. Everything he undertakes is thoroughly considered and consistent to itself. Many times this works brilliantly (the landmark Bayreuth Parsifal) and occasionally mis-fires (Brussel’s Rusalka-as-Belgian-streetwalker). Happily, Les vÍpres siciliennes finds the heralded innovator at the top of his game.
Since the piece is somewhat weakly plotted, Herheim brilliantly approached it as a fantasy rather than a realistic history, paraphrasing the story within a meaningful context. The creative team re-imagined the setting in 1855 within the very ornate theatre that hosted the work’s Parisian premiere. His research led him to discover that not only were ballerinas idealized as the standard of contemporary feminine beauty, but they were also frequently reduced to being courtesans as male opportunists abused them to their own pleasurable ends. This concept further focuses on the theme of patrons who have the social and financial standing to use, and abuse art.
This ingeniously allows the entire piece to be set within the theatre, on- and back-stage, encompassing the auditorium itself. The ‘audience’ is at times viewing the story of the French occupation on the stage, and at times participating in the telling of it. Philipp F¸rhofer’s monumental set design consists of ever-changing deconstructed components which include a massive gold proscenium arch, gilded ceiling appointments, three tiers of audience boxes, a huge mirrored wall complete with ballet barre, separate red and black grand drapes, and a gorgeous foyer wall with a painting of Etna erupting. 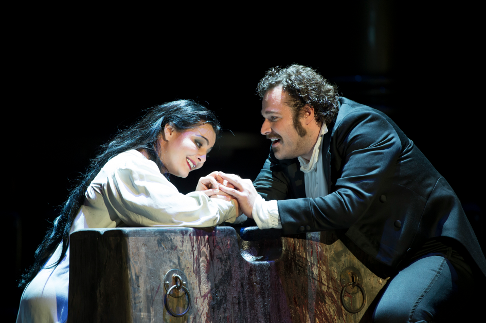 Bryan Hymel as Henri and Lianna Hartoutounian as Helene
Mr. F¸rhofer has concocted effective traffic patterns for keeping these elements in motion, with changes fluidly executed by the ROH backstage team. As large and handsome as the structures are, they are often used quite simply to achieve maximum effect. For example, the three tiers of boxes reverse to expose the stairs, which suggests the prison by simple addition of an executioner’s chopping block and straw. The mirrors separate to create entryways, and then recede to give way to the entire company performing ‘on stage’ as the elite watch from their boxes. The chopping block gets re-purposed as a wedding altar with the addition of candles that also get placed along the apron, creating footlights. The scenic invention was matched by Anders Poll’s meticulous lighting design. Not only did he isolate moments and soloists to fine effect but his washes and color choices created the right atmosphere, moving playfully between fantasy and reality. The garish illumination of the real audience in the score’s final moments was meant to beg the question: were we in any way complicit in using art to selfish ends?
The choice of period provided a fertile starting point for Gesine Vˆllm’s gorgeous costume designs. The elegant evening wear extended to HÈlËne’s resplendent sequined gowns. By contrast, the ‘actors’ performing the tale of the French-Italian conflict for the glitterati were decked out in a riot of colorful peasant folk costumes. With all this technical excellence in his arsenal, Mr. Herheim has crafted a wondrous re-telling of the story.
The overture is staged, opening with ballerinas in repose, in traditional white tutus. Seated in a chair down right, Procida is the ballet master, who rouses his charges to do their daily barre work. This serene, methodical fantasy milieu soon gives way to the intrusion of militiamen, who terrorize the women. Monfort brutally rapes one of the ballerinas, prompting three dancers to appear in black tutus, one injured, one pregnant, and one bearing a babe in arms. Soon, the young boy (Henri) appears who is the product of Monfort’s lust.
Herheim effectively uses the boy as a recurring visual, to include reappearing to be confronted by Monfort during his great aria, then as an axe-wielding executioner, and finally as a winged cupid in the wedding. The director has found considerable wit in this gloomy tale, witness the scene in which Monfort incites conspirators to battle and they respond by doing ballet barre work, daggers in hand.
There is also ingenious interweaving of dance throughout, which admirably unites and furthers the concept. Choreographer AndrÈ de Jong has commendably utilized his corps in a tantalizing blend of modern story-telling served up through a traditional dance ‘vocabulary.’ The lovely use of the ballerinas to frame Procida for his great aria was but one of several thoroughly bewitching moments.
In addition to careful planning and well-judged artistic decisions, Mr. Herheim’s greatest strength may be his uncanny ability to inspire his actors to truthful, deeply felt performances of great specificity. His collaboration with Mr. Schrott to create a fey, yet feral ballet master of a Procida was genius. The emotional journey that Henri and Monfort took in their extended duet was stunning in its rich detail, only to be surpassed by the ensuing tenor-soprano duet. What volumes it spoke as the duo confronted each other while circling the chopping block that awaited them.
And what a coup de theatre lay in wait in the last scene! Fantasy finally morphs into phantasmagoria and Procida appears in drag (no kidding!), his gown paraphrasing the soprano’s first act black number, but here the underskirt is sparkling with red sequins. When he/she plucks up the French flag off the ground and begins massacring people by spearing them with the pole, insanity rules, art is used and abused, the Sicilians have been sacrificed, and the on-stage audience has been sated.
When normalcy returns, Monfort returns, no one is really dead (just ‘used’ for effect), curtain calls are posed, and then . . .well, you’ll have to see for yourself, if you can score a ticket. Stefan Herheim continues to impress, enrich, invent, delight, and mature as a pre-eminent director of our time, and we are all the better for it.
James Sohre