The cast for the first
performance included Johan Botha as Otello, Ana MarÌa MartÌnez as Desdemona,
both Falk Struckmann and Todd Thomas singing the role of Iago, the former
withdrawing because of indisposition after Act I. This performance also
featured the American debut of tenor Antonio Poli as Cassio, John Irvin as
Roderigo, Julie Anne Miller as Emilia, Evan Boyer as Lodovico, Anthony Clark
Evans as Montano, and Richard Ollarsaba as a herald. The production was
originally directed by Sir Peter Hall; the present revival is directed by
Ashley Dean. Bertrand de Billy makes his Lyric Opera debut conducting these
performances, and Michael Black is officially Chorus Master with the start of
the current season. 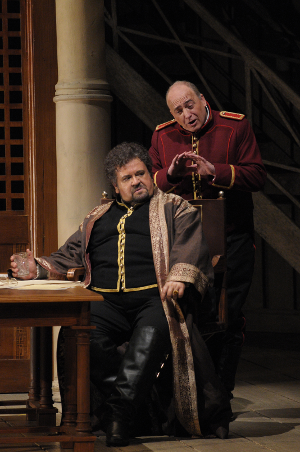 Johan Botha as Otello and Falk Struckmann as Iago

From the energetic start of the first act the role of the chorus of Cypriots
is emphasized. As the people shout in their enthusiastic pleas for Otello’s
success, Iago’s voice of negation is clearly audible. Struckmann’s Iago
intoned with chilling force his contrary wishes for Otello’s failure and even
demise in the “alvo frenetico del mar” (“frenzied bed of the sea.”).
When the hero alights triumphantly on shore, he declares to the jubilant
Cypriots “Esultate!” (“Rejoice!”). From this exciting start it was
clear that Mr. Botha inhabits a role truly suited to his voice. The high
dramatic notes and outbursts, so characteristic of Otello’s volatile nature,
are produced effortlessly and with accurate, direct focus of pitch in Botha’s
convincingly emotional delivery. In the subsequent duet between Iago and
Roderigo the motive for jealousy and ill-will is revealed. Iago resents the
recent promotion of Cassio to the rank of captain since he wished to receive
the distinction himself. In his plan to exact vengeance Iago confides in
Roderigo and urges the latter’s infatuation with Desdemona. Struckmann as
Iago and Mr. Irvin in the role of Roderigo both showed a distinguished sense of
lyrical line in the verbalization and coalescence of their respective emotions
and thoughts. The sacrifice in this ruse will of course be Cassio who is
encouraged to drink until he loses control. In this American debut Mr. Poli
made a strong impression as a singing actor. His use of legato
phrasing and fluid rise to high pitches is seamless, at the same time released
in a physically demonstrative display of Cassio’s inebriation. (It was at
this point in the ensemble that Struckmann’s voice began to suggest the
strain from treatment for allergies which occasioned his withdrawal at the
close of Act I.) Once Otello and Desdemona are awakened by the brawl between a
drunken Cassio and incensed Montano, the seeming chaos is interrupted.
Botha’s voice of authority cut through the choral pandemonium as he ordered
“Abbasso le spade!” (“Lower your swords!”). His demotion of Cassio and
reestablishment of order was sung as an extension of these commands with
precise, idiomatic intonation. Once they are left alone Desdemona and Otello
sing their celebrated love duet as a conclusion to Act I. For both Ms.
MartÌnez and Mr. Botha the range between dramatic excitedness and tender
intimacy is bridged naturally so that the tensions in this relationship develop
logically in response to the surrounding events. When Botha declares “Vien
… Venere splende” (“Come … Venus is shining”) as they return to their
chamber, the projected tranquility for Otello covers a persona already
shown to waver between extremes.

In Act II Mr. Thomas assumed the role of Iago. The substitution proceeded as
seamlessly as could be hoped, since Thomas enhanced the villainous character
with his further, bleak emphases. His rendition of Iago’s “Credo” was
appropriately declamatory with an expected internalization of lines that tend
toward self-reflection. After musing on this destructive resolve, Iago’s
influence on Otello grows perceptibly. Thomas’s subtle repetition to Otello
of the sentiment “Vigilate” (“Keep watch”), when speaking of
Desdemona’s fidelity, began to function as a growing germ in the husband’s
mind. At the entrance of Desdemona surrounded by her adoring followers
MartÌnez sang a rising pure line on “Splende il cielo” (“the sky is
bright”). Otello’s mood reacts to this optimistic depiction of nature until
her first appeal is tendered on behalf of Cassio. In the following quartet, in
which the couple is joined by the pair of Iago and his wife Emilia,
MartÌnez’s voice surged with touching high pitches on “Dammi la dolce e
lieta parola del perdon” (“Give me your sweet and happy word of pardon”).
Emilia retrieves the handkerchief that Desdemona dropped, but she cannot
withhold it from Iago and his plan. From this point forward the “Testimon”
(“witness”), of which Thomas swears the possession so chillingly, will have
palpable force. In their final duet Iago encourages Otello to exact vengeance
at which juncture Botha released forte his most emotionally convincing
top notes of the evening. 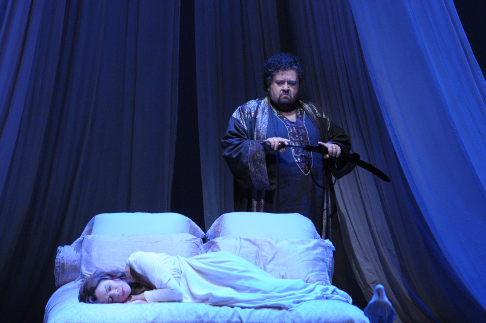 Johan Botha as Otello and Ana Maria Martinez as Desdemona

The dramatic tensions of Act III followed inevitably from the preparatory
scheming and doubt. Topics of the misplaced handkerchief and pardon for Cassio
are interwoven musically in the duet for the two principals. Once Otello curses
Desdemona while scorning her fidelity MartÌnez expresses the wife’s reaction
of hurt with a piercing high note on “le prime lagrime” (“the first
tears”). Otello’s public image is stained when he later casts Desdemona to
the ground in the presence of all at court, including Lodovico the ambassador
from Venice. In this role bass Evan Boyer’s announcement of the Doge’s
letter was intoned with a resonance which he transformed with surprise upon
witnessing Otello’s behavior. When everyone but Otello and Iago has left the
pubic court at the close of the act, Thomas’s Iago proclaims triumphantly
“Ecco il Leone!” (“Behold the Lion!”) as he places his foot on the
prostrate conqueror.

Desdemona’s murder in Act IV by her husband Otello is preceded by a scene
in which she remains together with Emilia and confides to her by means of “La
canzon del Salice” (“the Willow Song”). MartÌnez’s diction and
carefully shaped phrases made this aria not only a touchingly sung and
memorable showpiece, but also a lyrical extension of Desdemona’s character
elaborating on her persona within the entire opera. In addition to
ever-increasing rising pitches on “Salice,” MartÌnez infused
“cantiamo” (“Let us sing”) with a repeated piano delicacy. Her
final, heartfelt cry of farewell to Emilia indicated a resignation to what must
inevitably befall her. Indeed, after making his entrance Botha’s mix of
tenderness and violence as he first looked at Desdemona sleeping, and then
confronted her in excited dialogue summarized in mere moments the dramatic
conflict of this entire tragedy. Iago’s triumph is ultimately exposed as
treachery, yet the lyrical declarations and outbursts of love survive beyond
the violent end for Desdemona and Otello.