Maybe Pushkin never existed and Tchaikovsky is a condemned a bourgeois composer.
The first music we heard came from a cheap socialist era stereo, a blast of heavy metal to which a ripe young female appropriately gyrated. Fear and hope were equally mixed that this was the Tatiana. She was not, but was one of the seething swarm of inhabitants of a large communal apartment construed on the stage, leaving no doubt that therein existed a cosmos of human souls.
Emerging from this swarm were figures who gracefully appeared and disappeared, the characters we know by Pushkin’s names who moved in and out of the kitchen, the bedrooms, TV salon, bathroom, (spaces cleverly defined with minimal doorway lines and furniture) with beguiling naturalness and an ease that was purely musical.
There was one resident with a digital camera, a voyeur who surreptitiously captured young women in the a vista shower (we saw silhouette against the shower curtain). Innocent and charming, except we see him follow Olga as she pursues and then seduces Onegin while Tatiana is writing her letter. This spied upon scene took place on a slightly elevated platform behind the apartment floor, a place that served throughout the evening as somewhere else.
You get the picture. Filippievna did a lively dance to the famous Russian gypsy song “Dark Eyes” while listening to the radio before Tatiana’s birthday party where Lenski got jealous. The digital camera with its stored images got passed around. There was no way to stop a session of Russian roulette. 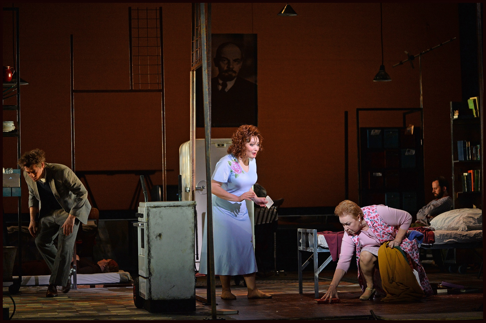 Dina Kuznetsova as Tatiana, Olga Tichina as Filippievna. Photo Marc Ginot / OpÈra national de Montpellier
It is indeed a digital world that allows quick and easy recording and transmission of images and scenes of life around us, from all angles and in duplication and repetition. Here digital technology was used to add additional perspectives to what we could see from our seats. Intimate scenes were magnified onto the huge blank stage backdrop, the apartment as seen from above was projected onto the huge screen echoing what we could see from our seats, etc. These were direct dramatic motivations for use of multimedia and the achievement of rare theatrical integrity for the use of such technology.
As a theater piece, really a theatrical installation based on Eugene Onegin it was conceptually elegant, masterfully directed, wonderfully witty and charmingly successful. While it may have been at cultural odds with the richly romantic voice of Pushkin it was easily comfortable with the broad and absolutely obvious emotional climate of Tchaikovsky’s genius if not this composer’s nineteenth century tonalities.
The separation of the mise en scÈne from its sources was complicated by a separation of the pit and the stage. Tchaikovsky’s score was elegantly realized by Finnish conductor Ari Rasilainen and Montpellier’s fine Orchestre national. It was a symphonic reading, the conductor pulling every possible nuance and depth of tone from his instruments, and carefully pacing the flow to exploit his players’ musicality.
While the maestro did cue the entrances of the voices he did not visually or musically communicate with the stage in any other way. Left on their own the singers responded to secure, sturdy tempos but were bereft of the supercharged emotional thrust that makes Onegin (or any Tchaikovsky opera) a huge and immediate emotional experience. Perhaps this distant music actually served the production, reinforcing the blatant separation of source from its translation, Pushkin from Putin, poetry from TV drama, and finally separating high nineteenth century art from what was high twenty-first century art.
There were many grand moments created by a superb cast, and not least by the Onegin of American baritone Lucas Meachem as a souless man, a man who did not know who or what he is. Mr. Meachem was unable to sustain a singing tone nor could he find the tonalities of the Russian language. Mr. Meachem however brought a physicality to Onegin that was quite involving and finally moving. Sad to say he was not given the final bow, he is after all the name of the opera. 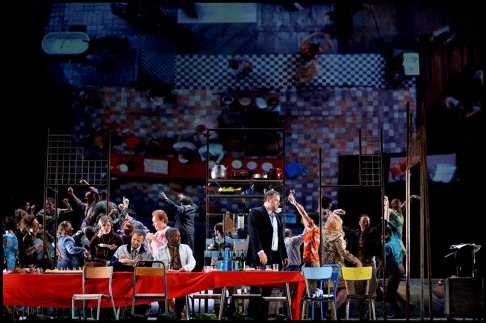 Act II Country Ball. Photo Marc Ginot / OpÈra national de Montpellier
Tatiana was Russian born soprano Dina Kuznetsova, alumna of the young artist program at Lyric Opera of Chicago, who wrote her letter moving between the kitchen table and the window of her room (metal lines directly frontal onto the audience, i.e. in your face), the brilliant light of the opened refrigerator flooding the darkened kitchen at an appropriate textural moment. Mlle. Kuznetsova possesses a round, Slavic toned voice she used with dramatic knowledge and style, unable however to squarely hit the high note at the ends of her letter and her final duet with Onegin.
Olga was enacted by French mezzo soprano Anna DestraÎl in a performance that was so real it was unnerving. Olga, a slut, was visibly bored by Lenski though she was happy to go to bed with him (we saw this in the ferment of life in the communal apartment), her seduction, quasi rape of Onegin showed real animal determination, her slight response to Lenski’s jealosy was of a shallow adolescent. It was a powerful performance that went well beyond good singing. It did not endear her to the audience.
Bespectacled Lenski was sung by Turkmenistan tenor Dovlet Nurgeldiyev, his spectacles crushed on the floor by Onegin he sang his “Kuda, kuda vÔ udalilis” emotionally groping his way across the stage as a pathetic rather than a sympathetic, sometimes tragic figure. Beautifully sung it earned the evening’s biggest ovation.
Simply superb were the two aging Russian women, proto petite bourgeoise, Larina sung by Svetlana Lifar and Filippievna sung by Olga Tichina. Russian bass Mischa Schelomianski oiled his way across the stage as an oligarch, the Prince Gremin. His surveillance cameras caught the Onegin Tatiana duet in eight identical images he sees from his armchair — ironically Tatiana’s new life as transparent as her past life.
All the scenes of acts I and II were run together. After the intermission four homeless looking dancers shoved a homeless looking Onegin around the stage to the music of the first polonaise. The second polonaise at a nouveau riche cocktail party brought the OpÈra’s fine chorus into in a moving circle, their clicking heels forcing the Tchaikovsky polonaise to a halt. It was a moment of powerful dramatic punctuation that underlined the wonderfully theatrical nature of this fine evening at the opera (of which this account is but the tip of the iceberg).
Authors of this theatrical installation were Marie-Eve Signeyrole who imagined and created the mise en scËne and her collaborators Yashi Tabassomi (costumes), Philippe BerthomÈ (lights), Julie Compans (movement) and Julien Meyer (audiovisual).
Michael Milenski