However, this revival of David Alden’s exceptional 2009 production of
Peter Grimes at ENO makes one wonder if, in future, tenors will be
similarly measured against Stuart Skelton’s heart-rending Peter Grimes, for
the Australian tenor here re-visits a role which in recent years he has
increasingly made his own.

The question has so often been: visionary dreamer or brutal realist?
Skelton’s Peter Grimes is both. He makes the ruthless fisherman’s dreams
seem rational and attainable, and yet, simultaneously, poignantly deluded,
forever to remain tauntingly out of reach. This Grimes is a divided man:
ruthless and defiant, and tragically vulnerable. Determined to challenge and
transcend the monstrous hypocrisy of the ludicrous but venomous inhabitants of
The Borough, he remains pitifully subject to their warped morality and
materialism. Skelton’s Grimes has a poignant humanity which is magnified by
the ugly depravity of the Borough’s cast of grotesques.

Alden updates George Crabbe’s eighteenth-century milieu to the time of the
opera’s composition — Britten made the first sketches of the opera aboard
the Axel Johnson liner as he headed back to Britain in 1942, having spent three
years in America, to the disapproval of many in his homeland. And, as the back
wall tilts to spew the parade of outlandish odd-balls into the court-room, one
is reminded of other, more recent oppressive, maniacal regimes. 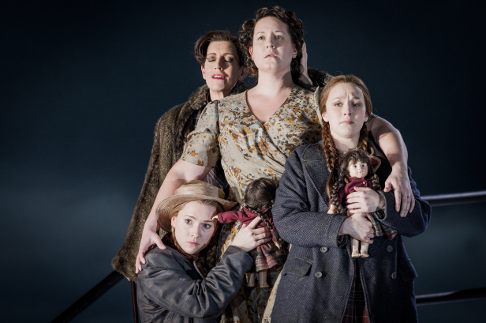 Despite the nautical buoy which looms at the right of the stage, some might
lament the absence a tangible sea — the providential force in the lives of
the community, both provider and destroyer. However, Adam Silverman’s
terrific lighting renders the shimmers and storms of the ocean ever-present; at
times the sheen of sun on water makes the back-stage gleam, the boundaries
between land and ocean dangerously ambiguous. As the sea tempest approaches the
coast, the radiance which filters through the tall windows of the wharf, as the
day’s catch is cleaned and gutted, assumes first a fragile hint of grey and
then a lowering dark intensity, revealing the vulnerability of those whose
lives depend upon the whims of an indifferent natural world. When the lightning
eventually releases its electric might, there is a sense of both welcome
release and defenceless exposure.

Silverman’s illuminating glare is like a beam of truth. There is no hiding
the ugly bruise which stains the apprentice’s shoulder, or the community’s
vicious sadism. Particularly effective are the dark, towering silhouettes which
hover in the background, shadows which suggest other lives and other selves —
paths which might be taken but which remain forever out of reach. Thus, as
Ellen urges Grimes’s young apprentice to enjoy the warm Sunday morning
sunshine, they are taunted by both the Borough’s hypocritical hymn-singing
and their own looming profiles. Nowhere is this more affecting that in
Grimes’s Act 2 ‘mad scene’, where Skelton’s hulking contour forms
multiple distant yet threatening doppelg‰ngers, a symbol of his fractured
self, taunting the disintegrating fisherman with past deeds and abandoned
hopes. When Skelton shuffles off at the close, to take his boat on one last,
fatal mission, one feels that he is escaping from himself as much as fleeing
from the merciless Borough posse.

Skelton’s Grimes combines both gentleness and aggression, and he seems
uneasy with either,; he is comfortable only when at work, fishing net in hand,
at peace only when cradled by the ocean’s embrace. At the end of the Prologue
duet, sung tenderly and with absolute technical assurance by Skelton and Elza
Van den Heever (as Ellen Orford), the fisherman reaches out to take Ellen’s
hand, before brusquely shoving her aside, unable to cast off his self-conscious
pride, accept her affection and expose himself to love’s uncertainties.

Emotionally illiterate, this Grimes is similarly unaware of his physical
might. Skelton welcomes the new apprentice who will help him ‘fish the sea
dry’ and earn sufficient wealth to conquer the Borough’s scorn; but as he
hoists the boy aloft, whirling him back to his hut, it is clear that he does
not appreciate the danger that his muscular power and verbal suppression pose
to the child. The apprentice — whose silent suffering is sensitively played
by Timothy Kirrage — cowers in the bare hut in soundless misery and terror;
but, his cliff-top fall is unequivocally an accident. As the rope which
supports the boy snakes through Grimes’s fingers, his distress is palpable
and it is concern, as well as the Borough’s hunting cries, that sends him
scurrying desperately after the boy. When the mob arrive they find an empty
shack and leave. But then, a stark, eerie vertical light illumines the cliff
down which the boy has tumbled, at the bottom of which Grimes hunches, cradling
the dead child in his arms. It is a heart-breaking moment. The villagers have
sneered at Grimes — ‘call that a home’ — at end of Act 1; but, it is
only home he knows and can offer. 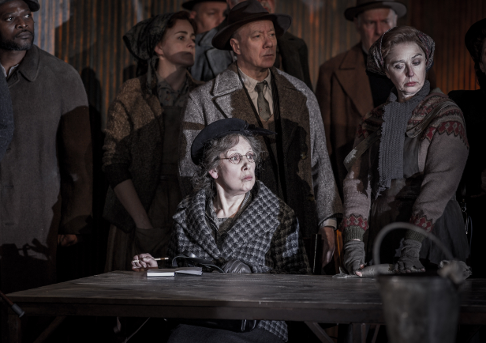 Skelton squeezes every emotion from Britten’s score. ‘What harbour
shelters peace?’ is both yearning and despairing, as Grimes’s hopes turn to
angry desolation. At the conclusion of Act 1, he furiously ropes himself to the
wall to confront the coming maelstrom. Like Lear, out-facing the raging winds
and drenching downpour, Grimes both defies and invites the storm. Grimes and
the storm are as one; as Balstrode says, ‘This storm is useful, you can speak
your mind … There is grandeur in a gale of wind to free confession, set a
conscience free’.

Yet, when Grimes attempts to share his vision with those sheltering in
Auntie’s tavern, he is met with incredulity, confusion and disdain.
Skelton’s voice was almost inaudible at the start of ‘Great Bear and
Pleiades’, but the fragility possessed great presence, each repeated E
gaining in intensity and assuming a new hue, before fading with the falling
melody into poignant stillness — the arc of the phrases like the eternal ebb
and flow of the waves, or the transient glimmer of a distant star. Out-voiced
by the pub-goers’ shanty, ‘Old Joe has gone fishing’, Skelton lumbers
despairingly among the raucous revellers, a lone soul among the massed ranks of
oppression and repression.

But, this is no one-man show; the cast is uniformly strong. While some of
the principals are returning to re-visit their roles from 2009, two newcomers
to the production play Grimes’s confidantes, Ellen Orford and Balstrode. Iain
Paterson’s Balstrode is an imposing stage presence. Commanding of voice, and
with characteristically excellent diction, Paterson is by turns a noble,
authoritative figure among the Borough, then a weary sea-dog, limping
stoically, seemingly worn down by Grimes’s own disaffection. Balstrode is not
spared Grimes’s aggression, and Paterson uses his dark-toned, smooth
bass-baritone to convey the old sailor’s shock and disappointment.

South African Elza van den Heever is superb as Ellen, her glowing mezzo
soprano expressing both compassion and resigned realism. Van den Heever began
tenderly, but later demonstrated considerable dramatic power and emotional
sincerity. The meditative trio which closes Act 2 Scene 1, for Ellen, Auntie
and the two Nieces, was wonderfully moving, a moment of repose and respite from
the braying calls of the Borough, as the villagers march out, seeking Grimes,
to the vicious beat of Hobson’s drum.

Rebecca de Pont Davies was a charismatic Auntie, mischievously swapping
pin-striped suit for a floor-length sabre, the warmth of her middle register
charming pub-goers and audience alike. As her Nieces, ENO Harewood Artists
Rhian Lois and Mary Bevan brought a sparkling vocal brightness to their rather
dark portrayal with its lingering suggestions of child abuse and exploitation.

Leigh Melrose reprised his role as Ned Keene, a pill-pushing, mustard-suited
spiv, singing with compelling clarity; Matthew Best returned to the role of
Swallow, his forceful pronouncements in the opening court scene drawing us
immediately into the conflict. Felicity Palmer conveyed both the
preposterousness and pathos of Mrs Sedley, while the Bob Boles of Michael
Colvin was convincingly and absurdly sanctimonious. 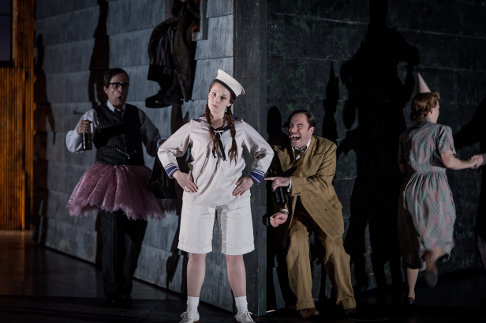 The ENO chorus was on excellent form too; after a slightly untidy start in
the Prologue, the precision of the ensemble was impressive in the subsequent
set-pieces, and the power of their massed voices was chillingly resonant in the
climactic posse scene.

Guiding all with characteristic assurance and powerful dramatic drive,
conductor Edward Gardner yet again demonstrated an innate appreciation of
Britten’s musico-dramatic structure and idiom. In the first of the
instrumental interludes, the crystalline etching of flute, clarinet, violins,
violas and harp alternated with majestic, dissonant surges from the timpani and
brass; in the storm interlude the profound hammering of timpani and pizzicato
double bass exploded beneath the chromatic whirling above.

My only doubt about Gardner’s authoritative reading concerns some of the
tempi, which were often daringly slow, especially in the final act. The pauses
between the posse’s hysterical cries, ‘Peter Grimes!’, were so extended
that there was a risk of the tension breaking. Similarly, Skelton’s final
monologue was audaciously drawn out; certainly, Grimes’s mental and physical
dissolution was conveyed, but perhaps some of his self-consuming bitterness and
fury was lost.

And, I’m not sure that the ending captures entirely the right note. In the
last scene of the opera, Britten instructs that the women of the Borough should
carry bundles of fishing nets down to the shore, as they sing of ‘the cold
beginning of another day’. The implication is that, as Swallow spies ‘a
boat, sinking out at sea’, the fisher-folk refuse to recognise their role in
the tragedy that has ensued, and remain indifferent to Grimes’s anguish and
death, unconcernedly resuming the routines of daily life. However, Alden’s
Borough do not refuse to acknowledge the terrible events they have instigated;
rather, they face the audience, unmoving, slowly declaiming the final scalic
arcs, as if Grimes’s death has drained them of their own life-force.

Alden’s Borough is suffocating and stultifying; the director offers no
open vistas to dilute the poison of hypocritical self-righteousness which
poisons its inhabitants, just tantalising glimpses of the freedom and expanse
of the sea which will ultimately salve and bless Grimes. Although the
transvestism and sexual perversities of the Moot Hall party are somewhat
anachronistic, they are a powerful reminder of the self-destructive force of
perverted moralising. And, of the fragile defences of those who resist, who
dare to be different, dare to dream.