While invisible pulses of energy emanating from New York’s Lincoln Center will become huge shapes, bright colors and amplified sounds the OpÈra Monte-Carlo’s Rusalka was vividly alive on the stage of one of the world’s most beautiful theaters, the Casino’s 500-seat jewel box, the Salle Garnier).
The renowned Orchestre Philharmonique de Monte-Carlo was in the pit in full force with notably splendid harp playing to evoke the splashes of water that were in fact quite real splashes of quite real water.
Stage director Dieter Kaegi created a contemporary story to frame the adolescent fairytale that is Dvorak’s last opera (of ten). During the overture two shapely bodies (male and female) on a motorcycle came upon a hidden pond. They shed their cloths (though strangely not all-the-way), dove in and did not reappear. It was of course a magic pond, so water sprites emerged — three stick-like marionettes (with three human operators) whose voices were three black-gowned singers standing downstage. 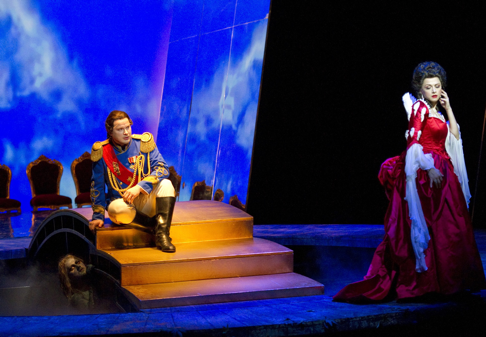 Maxim Aksenov as the Prince and Tatiana PavlovskaÔa as the Foreign Princess [Photo courtesy of OpÈra Monte-Carlo]
More splashes of real water for the half-drowned appearance of the water god Ondin, father of the water sprite Rusalka who was not a marionette. Dressed in filmy light blue she was meant to be water itself so she never had to get actually wet. The romantically deluded Prince appears with his rifle to sing an impassioned love duet with Rusalka as he whisks her away to his palace, not forgetting to pick up the rifle he had put down when he embraced her.
Rusalka had had to negotiate with the witch Jezibaba to become human, the price was losing the ability to speak i.e. sing. Meanwhile the two shapely motorcycle bodies reappear to dance a pas de deux under the theater lights carefully focused by a stagehand who sang the role of the forester. A visiting princess points out that the prince is ignoring his guests. It is not certain if the prince falls in love with this princess even though he loves Rusalka above all else. Anyway, Rusalka thinks he has fallen in love with another.
All this gives rise to absolutely beautiful music, the Czech equivalent of an over-wrought Giordano, an uncanny amalgamation of Tchaikovsky’s on-your-sleeve emotions with Wagner’s subliminal emotional and philosophic impulses. There is a plethora of musical climaxes that offer frequent hints that the opera is about to end but it never does. It takes big voices to sail over the top of all this music.
The OpÈra de Monte-Carlo took very good care of these needs. American conductor Lawrence Foster imposed the necessary sweep and importance to big music on a trivial subject. It was cleanly shaped, an approach that ignored a slavic pathos that might ignite such fateful tragedy. Dutch soprano Barbara Haveman brought big voice to Rusalka that she uses with high-level artistry, her “M?sÌ?ku na nebi” was sensitively detailed with a felt intimacy in this actual context rather than as the usual concert aria. While Mme. Haveman did not find the youth and innocence in her voice that made her Monte-Carlo Jenufa (2007) memorable, she accomplished with sincere aplomb the miming of being water, and in fact distinguished herself as a total performer. 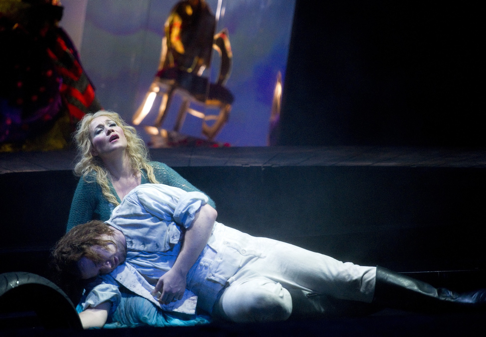 Barbara Haveman as Rusalka and Maxim Aksenov as the Prince [Photo courtesy of OpÈra Monte-Carlo]
Russian tenor Maxim Aksenov brought good looks, good high notes and an theatrical savoir faire that reveals his foundation in music theater and his grounding in the slavic repertory. Russian soprano Tatiana PavlovskaÔa added temperament, impassioned voice and very good singing to the Foreign Princess. Slimy costumed Russian bass AlexeÔ Tikhomirov, most often seen splashing in water or dripping water proved himself a willing performer who made the most of his role in this context. Polish mezzo-soprano Ewa Podles lustily sang the witch Jezibaba, naively directed as if she were the witch in Hansel and Gretel.
Director Kaegi completed the frame he created to enclose Dvorak’s opera by allowing his motorcycle couple to emerge from the pond during the final duet and delightedly photograph one another holding remnants of the fairytale still taking place — the Prince lay in the pond along with the now upended motorcycle and other detritus, dying his watery death in the arms of Rusalka who did not care.
Michael Milenski