Coeur de Chien was a commission of the Holland Festival, premiered in 2010, and since has found clamorous arrivals in 2011 at the English National Opera as A Dog’s Heart, and in 2012 at La Scala as Cuore di cane. Its real title is ??????? ?????? because it is sung in Russian (though the libretto by Cesare Mazzonis was written first in Italian). It is based on a 1924 novel by Mikhail Boulgakov that was finally published in Russia in 1987.
The composer, Alexander Raskatov, now 60 years-old, was a Soviet citizen and a member of the Union of Soviet Composers. He is now a member of the Composers’ Union of Russia though these days he lives in France. His only other opera, The Pit and the Pendulum was composed in 1990.
This satire is about life in Moscow in the years just after the 1917 revolutions. It has absolutely no point of view and makes no judgements. Those were heady years when the intelligentsia, apparatchiks, commoners (the proletariat) and dogs were adjusting into the greatest social experiment of modern times, maybe ever. It was a mess all around, though according to this opera none of the various players ever lost their basic humanity (vanity, cupidity, duplicity) or their considerable personal charm. It was a beguiling evening.
Coeur de Chien is an important opera that deserves to enter the repertory and certainly will depending on who has the guts to tackle its difficulties. The Holland Festival gave it an auspicious debut engaging director Simon McBurney of London’s Complicite, a theatrical venture founded in 1983 that is famous for its tackling of serious subjects using high-powered technology, and by engaging British designer, veteran-of-all-important-theaters Michael Levine to design the set (Levine is known most recently to San Francisco and Met audiences for his spectacular twenty-five year-old Mefistofele). 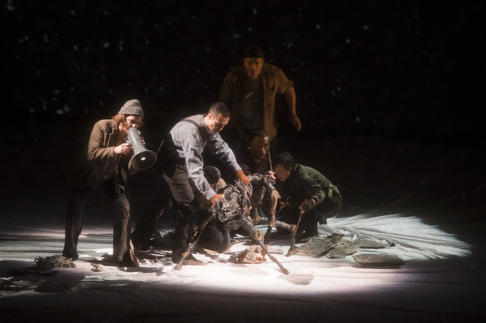 Bouboule (dog), Voice of dog (w/megaphone) and other voice of dog (behind), handlers of dog. Photo copyright Stofleth
On the face of it, it is not exactly a serious subject given that all players are reduced to their most vulgar levels and stay there. That leaves us not much to think about. There was little high technology in its realization given the set was but a raked platform and a back wall and a few projections. The famished dog was a marionette with four manual operators — no high tech there.
Raskatov made vulgar music (snorts and farts) and he made music vulgar incorporating liturgical hymns and famous old folk songs into the musical flow of his sensational text (the last line of the first act, shouted by the dog transformed into Communism’s “new man” is “get fucked!” in the libretto, and “lick my dick” in the supertitles). The composer recognizes that contemporary ears are accustomed to an infinity of musical and random sounds thus he has no compunction in raiding Monteverdi’s recitative, using extreme voices (shrieking higher-than-you-can-imagine sopranos) or making hoarse, coarse sounds through megaphones (the opera ends with sixteen players shouting vowels through megaphones into the faces of the audience. Underlying all this is Raskatov’s basic musical language heard from time to time which seemed to be more or less Webernesquely minimal. 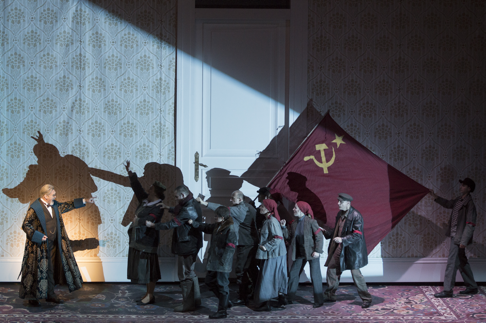 Sergei Leiferkus as the professer, members of Il Canto di Orfeo as provocateurs. Photo copyright Stofleth
This unleashed musical vocabulary was transferred onto the stage in an equally blatant vocabulary. There were two sets, outdoors and indoors that were the one set (floor and wall), black for outdoors where some scrims and projections created a raging blizzard without needing even a single plastic snowflake. When lighted the set was patterned to be a rug and wallpaper surrounding a big doorway. The floor ran with gallons of blood when it became the operating room for the castration and implant. When things really fell apart in the second act the wall itself (made of paper we learned) was smashed for entries and exits, then the wall tilted backwards letting players move under it. One arm of the enormous three armed chandelier that flew in to make the space a salon broke and dangled. Period.
The players movements were sometimes more or less natural, in fact the man/dog Charikov was even quite realistic when you imagine surreally how such a creature might move and what gestures he might make. Other times movement was abstracted, and in extreme moments it was caricatured like figures in a comic strip equating in body rhythm the constant disjointed flow of the vocal line.
The original production in Amsterdam was conducted by Martyn Brabbins as it was in Lyon. The principals of the original cast remained intact except the role of Charikov here played by Peter Hoare who came to the production at La Scala. These were all extraordinary performances, and how else could they have been for such extraordinary roles. The smaller roles in Lyon were impeccably inhabited by appropriate artists as well.
It was quite noticeable that the audience was not the usual Lyon bourgeoise but instead mostly an under thirty contingent (meaning invited), and there were a few empty seats in the back of the auditorium, the assumption being that there was no huge demand for seats. There was however a huge ovation for the production, the kind young audiences like to give when finally they too get to do something.
After the Milan performances there were rumors that the production would tour to the United States. But sad to say there can be no opera company in the U.S. that would risk the vocabulary or manage the budget. It should have been the purview of an idealized version of the latter day New York City Opera. Sadly such an opera company does not now exist.
N.B. There are extracts from Coeur de Chien aka A Dog’s Heart aka Cuore di cane on YouTube.
Michael Milenski