This is a (forgive the pun) grave, serious Don Giovanni. Although
Mozart wrote to his father that ‘The most essential thing is that on the
whole the story should be really comic’, the phrase ‘on the whole’ leaves
room for some equivocation and the term dramma giocoso has given the
musicologists much to chew over. (Indeed, the esteemed Mozart scholar Tim
Carter titles his programme article ‘Serious, Comic Or…’)

But, if the overall effect of the production is somewhat sombre, and the
ending leaning towards existential, then the action itself is full of life, the
stone-grey faÁade of Es Devlin’s inventive set illuminated by the engaging
video animations of Luke Halls and Bruno Poet’s lighting design. 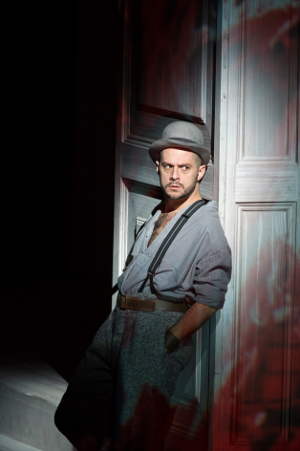 As the foreboding tones of the introductory andante are swept aside by the
overture’s Molto Allegro onward scurrying, so the curtain rises on a
bare exterior wall, imposing facing the auditorium. But, it doesn’t stay bare
for long; like a visual representation of the musical narrative, the names of
Don Giovanni’s sexual conquests appear — at first slowly then in a frantic
rush of calligraphic etching. It is as if an invisible pen of light is
reproducing before our eyes the inscriptions in the Don’s catalogue of
paramours.

As the central cube of Devlin’s architectural design rotates, a
doll’s-house labyrinth of staircases reaching into perpetuity and
interlocking rooms for lovers’ trysts, washes of colourful graffiti —
patterns and petals, tears and tessellations — tell the Don’s tale. In the
second act the side panels of the faÁade draw back, isolating the
geometrically intricate cube within a black void and emphasising the Don’s
loneliness. It’s all visually engaging and thought-provoking, the
disorientating vortex which accompanies the ‘Champagne aria’ — with
Giovanni suspended at the centre of the geometric maelstrom — is a highpoint,
suggesting both the effervescent fun of popping of champagne corks and the
uncontrollable consequences of the reprobate’s debauchery.

The mid-nineteenth century costumes (by Anja Vang Kragh) are handsome —
the ladies’ frocks are especially luxurious and eye-pleasing — but they
fail to communicate the class differences which drive the conflict, most
noticeable with the vengeful interlopers at the wedding party cry, ‘Viva la
libert‡!’ 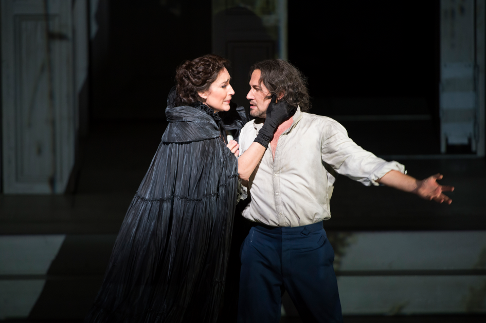 Mariusz Kwiecie?’s Don is more pensive quester than glib libertine or
irrepressible rake, but his poise and good looks are effortlessly charming. His
rich baritone is even and flexible, and complemented by a beautiful silky tone
— showcased in a wonderful ‘Serenade’. Not surprising, then, that the
woman are bewitched: who wouldn’t be charmed by the eloquent elegance of
Kwiecie?’s ‘L‡ ci darem la mano’?

Certainly, Donna Anna is in his thrall. Sung with unfailing power (a little
too much at times?) by Swedish soprano Malin Bystrˆm, this Donna is a woman
who knows her own mind, what she wants and how to get it. It’s clear from the
opening moments that she is hot for Giovanni as he is for her; as her loyal
Ottavio declares his adoration in ‘Dalla Sua Pace’ — “What pleases her
gives life to me … joy I cannot know unless she shares it” — his tenders
words are mocked by his betrothed’s heartless actions: Anna climbs the
staircase for an assignation with the expectant, colluding Giovanni.

Bystrˆm was committed but sometimes the brightness of tone had a harder
edge, and her Italian diction needs some work. That said, she more than
mastered the technical challenges.

VÈronique Gens’ Donna Elvira couples ardent passion with resentful fury.
Although Gens offered an impassioned ‘Mi tradi’ — a fiery denouncement of
the perfidious betrayer — with superb breath-control and dynamic variation,
Elvira remained determined to believe the best (or ignore the worst) of the man
who has deceived her. As Leporello recited the catalogue of inamoratas, she
clutched Giovanni as if the warmth of her embrace might erase the evidence from
the page. Gens’ stylish ornamentation was also exemplary. 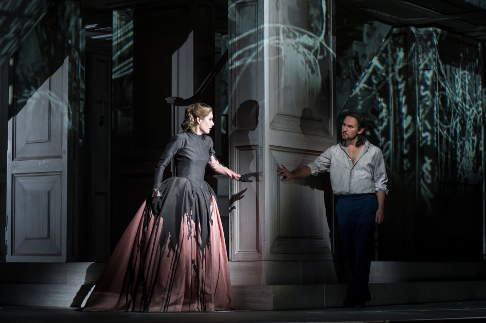 Leporello was expertly sung and acted by Italian bass-baritone Alex
Esposito, the above-mentioned catalogue aria suave and stylishly phrased. The
sleazy servant’s roguery was credible and his vulnerability to the whims of
his untrustworthy master touching. Esposito is fast making a name for himself
as a consummate Mozartian — especially in this role — and it was a shame
that the production does not offer more opportunity for him to showcase his
skills as a master of musical comedy and irony.

Powerful, well-crafted singing from Italian tenor Antonio Poli gave stature
to Don Ottavio, a character who can sometimes be over-shadowed by the charisma
of his adversary and the hysterics of his affianced. ‘Dalla sua pace’ was
particularly sweet of tone, and a delicately floated pianissimo was
bestowed with heart-rending poignancy by the concurrent betrayal of his
false-hearted Anna.

Elizabeth Watts’s Zerlina is no unworldly country girl; lively and
vivacious, she is eager to submit to Giovanni’s advances — although it
isn’t clear why, having succeeded in evading Masetto’s watchful
surveillance, she should then felee from Giovanni’s embrace, tearing her
dress to suggest an assault? Last minute doubts, or simply a tease? Watts’s
voice was sumptuous but always polished; Dawid Kimberg’s Masetto, despite
showing his potential for violent outburst when delivering Zerlina a vicious
clout in a fit of jealousy, was no match for her guile in ‘Batti, batti’.
Kimberg himself sang with attractive tone, musically precise and verbally
crisp.

Making his house debut, Ukrainian bass Alexander Tsymbalyuk was impressive
as the Commedatore. Although presented as a fabrication of Giovanni’s
increasingly disorientated imagination, Tsymbalyuk — positioned aloft, above
the figure of an eye — projected with commanding impact into the auditorium,
dignified and intent on justice. 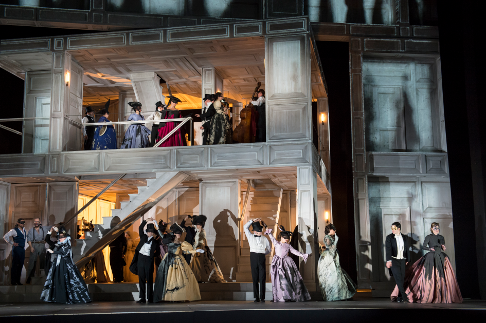 A scene from Don Giovanni

At the helm conductor Nicola Luisotti led the orchestra of the Royal Opera
House vivaciously through the score; oddly, the brightness and grace of the
orchestral playing was not matched by Luisotti’s own rather heavy-handed
fortepiano-continuo, which was overly loud, flamboyantly intrusive and
inappropriately dissonant at times.

It was a pity that such a large cut was deemed appropriate in the final
scene. But, the conclusion itself was powerful: rather than the customary
flames of damnation and desperate descent to Tartarean depths, Holten and
Devlin fade to grey, the light and colour of life withdrawing, leaving Giovanni
alone, arms-outstretched, uncomprehending. As the fugal chorus — much
truncated — assails him from the wings, Giovanni is an isolated, confused
figure, unable to make sense of a world indifferent to his experiences,
recognising that the freedom he has enjoyed brings inescapable consequences.

Not a defiant nihilist, rather a man yearning for life: this
dissoluto is certainly punito.