The Tender Land was not a success at its New York premiere back in 1956, and it is not a success these fifty-eight years later in Lyon. But not for lack of trying, then or now.
For this production the OpÈra de Lyon joined forces with the ThÈ‚tre de la Croix Rousse (the Croix Rousse is a neighborhood above the city center, home to the centuries-old Lyon silk industry where there was once an ochre cross) where it was performed. The artistic director of the Croix-Rousse theater, Jean Lacornerie staged this production. 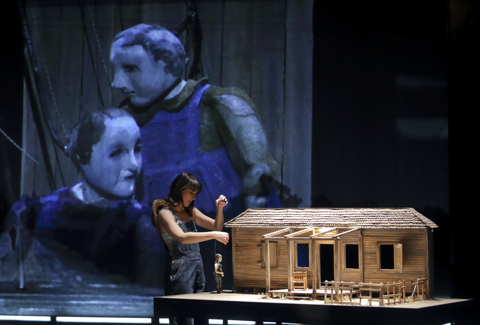 Laure Barras as Laurie Moss. Photo copyright Michel Cavalca
The Tender Land was composed as an opera for television at a time when mass communication believed it had an obligation make high, or higher art, like opera, theater and symphony, accessible to the masses (at that time the masses meant anyone who did not live in New York City). So NBC Television created an opera company for opera on television!
Mid-twentieth-century America like much of the European world was struggling to integrate a broader public work-force into a cohesive social fabric. This meant that American composers with aspiration to political correctness — and it was dangerous if you did not — aspired to create music that would speak directly to these masses. [Ironically at the same time the U.S. was providing the funding for the hermetic music coming out of Darmstadt.]
Much fine and beautiful music came out of New York by composers like Aaron Copland who submitted The Tender Land, his one and only opera to NBC Television Opera. Sensibly enough it was rejected by the television producers probably because it does not have a strong enough story to support one hour forty minutes of story telling, its characters are monochromatic and its message of hope is compromised by their innate simplicity, read mediocrity. Simply its Depression era setting was not in keeping with the frenetic enthusiasms of the mid-fifties (recall the 1955 design shift in cars) and its musical numbers were not based on exotic cultures, like for example the New York gangs of West Side Story or the Italian immigrants of The Saint of Bleecker Street.
These fifty-eight years later it is a regretful look at American fundamentalism.
But within The Tender Land there are jewels of pure music, and these sang out splendidly on the Croix Rousse, the superb quintet that closes the first act bringing the separate impulses of the five principals into an integrated musical context, and the gorgeous, extended love duet of Laurie and Martin that interwove its musical elements into a colorful fantasy of love. These moments are purely musical, not dramatic, and were indeed pleasurable. 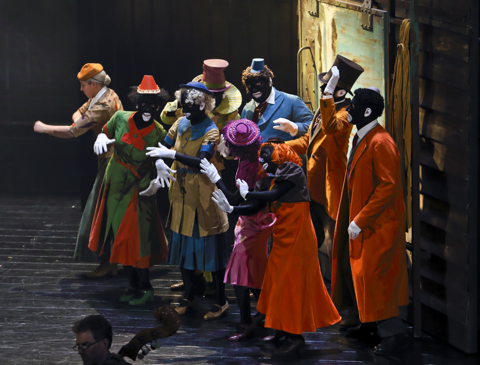 The chorus in blackface [!]. Photo copyright Michel Cavalca
The choreographed numbers were appropriately lively with the youth and agility of Copland’s hopes for the future — Laurie, Martin and Top — able to manifest their impotent energies. In fact this recall of the energy of Copland’s 1944 Appalachian Spring provided the validation for the reduction (by Murray Sidlin) of the fully symphonic score of The Tender Land to a mere flute, clarinet and bassoon plus double strings and piano, Copland’s original orchestration for Appalachian Spring.
The intrinsic weakness of the opera precludes enlisting its original, full orchestral forces for a production. Sadly audiences will likely never hear the complete the sonic world envisioned by Copland when the opera is staged. Thirteen excellent players from the orchestra of the OpÈra de Lyon gave it their all, with the OpÈra de Lyon’s assistant music director Philippe Forget (that’s for-jay) as their able leader. It was fine playing, and at times even these few instruments created the true American colors that Copland’s harmonics uniquely evoke. We ached for more of those colors.
Mostly however the minimal orchestral forces disappeared into the very fine, complex and sizable production created by Mr. Lacornerie, his scenographer Bruno de LavenÈre and his costumer Robin Chemin. Mr. Laconerie wisely played on the television genesis of Copland’s opera, reducing the visual field to a doll-house-sized farmhouse with puppet characters identically dressed as their operators, the actual characters. At times this puppet action or the faces of the operators was projected onto a half stage scrim creating the close up images that are the primary tools of television. At other times these props disappeared and actual farm buildings appeared for real stage production. And finally the whole stage was closed for Ma Moss to give her closing monologue as a concert piece in front of the curtain.
The OpÈra de Lyon provided a solid cast. Veteran bass-baritone Stephen West was a stern, stolid and soul damaged Grandpa Moss, veteran mezzo-soprano Lucy Schaufer was a fine voiced, not rough enough Ma Moss who did not provide enough character or voice to conclude the opera (Mme. Schaufer is a fine artist, here victim of perhaps the direction, and certainly of the reduced orchestral forces). Three members of the OpÈra de Lyon studio created excellent characters, RÈmy Mathieu as Martin had real music theater sparkle, Toby Girling as Top exhibited extraordinary strength and agility as a singer and dancer, and Laure Barras brought much depth to the role of Laurie Moss. The neighbors were cast with excellent singers from the OpÈra de Lyon chorus.
Michael Milenski