In 1857, the Teatro San Carlo in Naples commissioned Giuseppe Verdi to write an opera. He first intended the work to be his King Lear, but that could not be ready in time for the 1858 Carnival Season. Later, he and his librettist Antonio Somma decided to base an Italian opera on EugËne Scribe’s French libretto for Daniel Auber’s Gustave III, ou Le bal masquÈ. Scribe wrote about the 1792 assassination of King Gustav III of Sweden who was shot while attending a masked ball. Censors in Italy, however, had serious objections. Verdi and Somma made changes, only to be refused a second time. In his libretto, Scribe had kept the historical figures of Gustav and the fortune-teller, but added the character of Amelia and her romance with the king.
On January 14, 1858, several Italians attempted to assassinate Emperor Napoleon III in Paris. After that, censors absolutely forbade the opera to show the murder of a monarch. They told Verdi and Somma to make further changes. Verdi was so angry that he broke his contract. The management of San Carlo sued him and he countersued. After some months, when the legal issues were resolved, Verdi was free to present the libretto and musical outline of the work to the Rome Opera. Since censors demanded further changes, they moved the site of the action to Boston during the British colonial period. 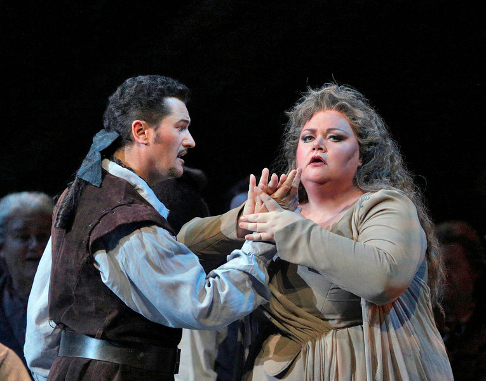 Tenor Piotr Beczala (Gustav III) and mezzo-soprano Stephanie Blythe (Madame Arvidson).
On February 17, 1859, The Teatro Apollo in Rome premiered Un ballo in maschera (A Masked Ball). Not until the twentieth century was the site of the action moved back to Sweden. Now the baritone is called Count Anckarstrˆm after the actual killer who was beheaded for his crime.
On March 11, 2014, San Diego Opera presented Verdi’s A Masked Ball in a traditional production by Leslie Koenig. She used wonderfully ornate older scenery that formed an excellent background for John Conklin’s soft colored costumes and Gary Marder’s well-planned lighting designs. Metropolitan Opera star tenor Piotr Beczala was Gustav III, the king of Sweden. It’s a long role and there were a few rough-edged tones in his first aria, but after that he gave a radiant performance. His duet with Krassimira Stoyanova, the Amelia, and his final aria were superbly sung. Stoyanova’s lustrous voice blended well with Beczala’s and she gave an insightful portrayal of his troubled but innocent love interest.
Greek baritone Aris Argiris is new to San Diego. With his performance of Count Anckarstrˆm, he established himself as a fine singing actor with a stentorian voice and a commanding presence. His scene with Amelia made sparks fly across the orchestra pit. Stephanie Blythe has an incredible voice with a distinctive sound and a huge range of tone colors, all of which she used as Madame Arvidson, the mysterious fortune-teller. 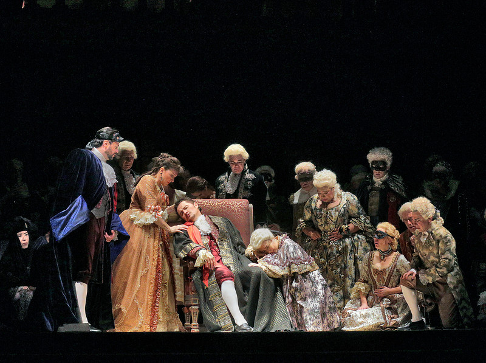