In 1835 Gaetano Donizetti composed his drama tragico Lucia di Lammermoor to a libretto by Salvadore Cammarano. He based upon Sir Walter Scott’s 1819 historical novel The Bride of Lammermoor. Scott based his plot on a seventeenth century incident that took place between Janet Dalrymple and her lover, Archibald, the third Lord Rutherfurd. The Dalrymple family, who lived in in the Lammermuir Hills of south-east Scotland, objected to the match because Rutherfurd was poor and supported King Charles II. The Dalrymples, who were staunch Whigs, preferred a constitutional monarchy to absolute rule.
An impassive Janet married her family’s choice, Sir David Dunbar of Baldoon Castle, on August 24, 1669. Not long after the couple retired, screaming was heard from their room. When the family forced the door open, they found David bleeding from stab wounds. Janet was trying to hide in a corner and she had blood on her nightgown. We only know that she appeared to be insane and died two weeks later. Scott had once been in love with a lady who jilted him for a richer man, so his novel may have reflected a personal emotional response.
On March 15, 2014, Los Angeles Opera presented Elkhanah Pulitzer’s production of the opera, which she set in 1885 when women were beginning to be recognized as persons separate from their fathers, brothers and husbands. At that time many European countries were beginning to allow women to own property, obtain higher education, and choose their husbands. An 1882 Swedish law granted women the right to choose their own marriage partners. Women in Scotland could have known what rights might soon be theirs. 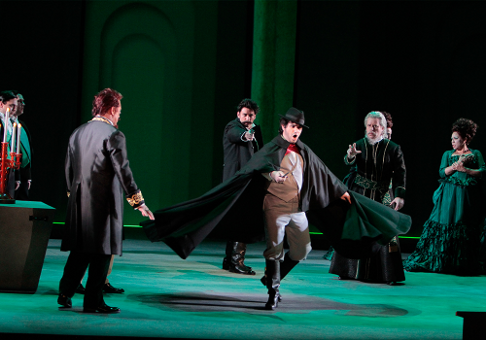 Edgardo, Saimir Pirgu, finds that Lucia, Albina Shagimuratova, is marrying Arturo, Vladimir Dmitruk
Carolina Angulo’s scenery for Pulitzer’s production was totally unembellished except for a few neon strips, and it became a background for Duane Schuler’s lighting and Wendall K. Harrington’s fascinating projections that realized much of what was being sung in the libretto. Christine Crook’s stylized costumes were equally lacking in detail, but they served to set the time of the action in the past.
Soprano Albina Shagimuratova portrayed a troubled Lucia who had hallucinations from the beginning. An accomplished virtuoso, she created a real character and sang the coloratura trills and cadenzas of the Mad Scene with freshness and verve. Commanding the stage as her passionate lover Edgardo, tenor Saimir Pirgu sang with great beauty of tone and a variety of sound colors. He was already a fine tenor when he first came to LA to sing Rinuccio in the company’s 2008 Gianni Schicchi, but he has since become one of the world’s most important interpreters of lyric tenor roles. Even with the inclusion of an extra scene in this production, he sounded as fresh at the end of the opera as he did when it began.
Baritone Stephen Powell who impressed the San Diego audience in Pagliacci, was thoroughly confrontational as Lucia’s bully of a brother, Enrico. His evenly focused stentorian tones let you know that he would have his way, no matter what the consequences. As the Calvinist preacher, Raimondo, James Cresswell was the sanest of the principal characters, but his version of religion was no help to the heroine. Vocally, his range was even from top to bottom as he sang Donizetti’s difficult music.
I hope this cast will record the opera. This sextet, in particular, with six equally strong wonderful voices, deserves to have a wider hearing. Vladimir Dmitruk, the Arturo, will probably make a good career in the future and D’Ana Lombard, the Alisa, may go on to more important roles. Joshua Guerrero, who had already been spotted as a new talent when he sang in last year’s Evening of Zarzuela and Latin American Music, was a committed Normanno. 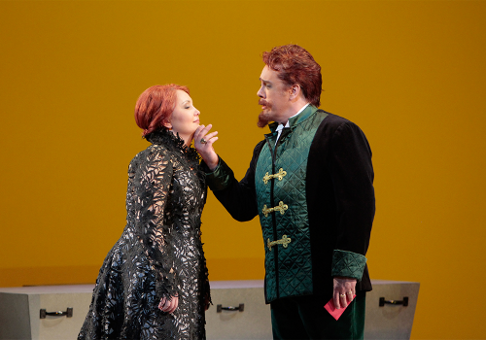 Enrico, Stephen Powell, and Lucia, Albina Shagimuratova
This was a complete rendition of the opera that opened up the usual cuts. The inclusion of the Wolf’s Crag Scene brought some music to the stage that many operagoers might never have heard sung live before. It also added to the audience’s knowledge of Edgardo’s character. Although the movements of members of Grant Gershon’s chorus were stylized, they added greatly to dramatic tension of each of the scenes in which they appeared with their strong, well-harmonized singing.
James Conlon brought us not only the complete Lucia, he performed it for us the way Donizetti originally conceived it. That included Thomas Bloch’s exquisite playing of the glass harmonica as the accompaniment to Lucia’s madness. The instrument is composed of numerous blown crystal glass bowls fitted into one another but not touching. They are held in place by a horizontal rod. The diameter of each bowl determines its note and a pedal controls the rotation of all so that the player can rub their edges with wet fingers as the bowls turn.
Maestro Conlon gave his audience dramatic climaxes as well as long lyrical lines while supporting the singers by keeping the decibel level low enough for them to be heard with ease. This was an extraordinary rendition of this well known opera that many in the audience will remember for years to come.
Maria Nockin