It was an Italian opera, the abstract visual images of a Japanese born American and an American fable that converged magically into artistic totality.
The 2006 production itself (design and staging), is from Opera Omaha. It has since traveled to Madison, Dayton, Vancouver, Honolulu, Atlanta, Philadelphia and Charlotte. It would hold the stage in any opera house in the opera world. It is a masterpiece.
The sets and costumes are by Omaha based ceramic artist Jun Kaneko who collaborated with stage director Leslie Swackhamer, a professor at Sam Houston State University (Houston) whose theatrical roots are in Seattle, to create this unique production.
Jun Kaneko works primarily in repeated patterns in two dimensional clay, a visual process that brilliantly found its way into Puccini’s verismo — the abstracted, multi-colored umbrellas of the wedding guests was the kaleidoscope of village life, the sliding panel of black and white squares meant the house. Screens flew in and out on which repeating, jagged lines of growing tension were drawn. These were but some of the patterns that multiplied the joyous and horrific emotional obsessions that are at the base of verismo. 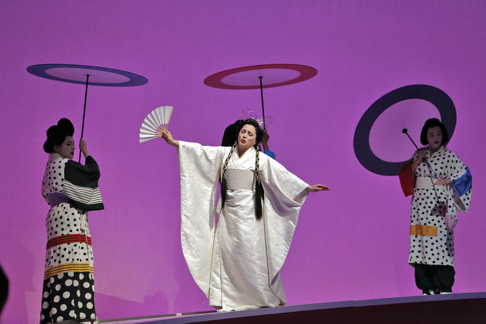 Act I, Patricia Racette as Butterfly. Photo by Cory Weaver.
Kaneko creates abstract location (background) in giant swaths of solid color — a golden yellow for the marriage, this color carried through the opera by the golden trousers of Trouble, reds and blues for the American presence, and finally brilliant red for blood, in a dripping image that mirrored the neck seppuku committed by the Butterfly standing just below. These were some of the colors that conveyed the powerfully contrasting forces of verismo.
San Francisco Opera’s Nicola Luisotti was in the pit. This powerful musical presence usually dominates the War Memorial stage. However here the tyrannical maestro met his match — the evolving visual statements riveted our eyes to the stage, diva Patricia captivated our emotions. The maestro did no more than hold us in thrall to this masterwork. It was what great operatic conducting can be. And very seldom is. 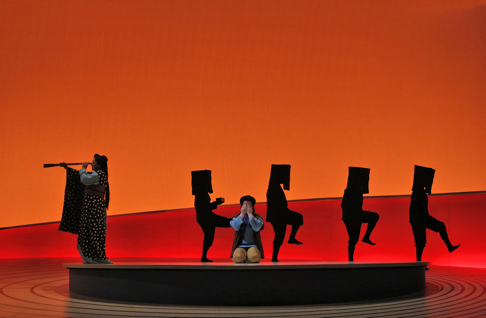 Act II vigil. Photo by Cory Weaver.
This was the performance in its finest moments.
Soprano Patricia Racette no longer has the bloom of voice to create the Act I Butterfly or to deliver a resplendent “un bel di.” But she has gained vocal force and darker colors to execute with soul-wrenching power the words that take her gently and brutally to sacrifice and suicide.
Patricia Racette’s Butterfly has been legend for many years. It is a role she is not likely to keep in her voice much longer.
Mezzo soprano Elizabeth DeShong portrayed a Suzuki that could easily become legendary as well. She possesses a lyric mezzo voice in full flower, and a presence that offers an expanded dimension of character for roles like Suzuki and Cenerentola (her Glyndebourne debut) and trouser roles like Hansel (Chicago) and Maffio Orsini (ENO and SFO).
Baritone Brian Mulligan made an adequate Sharpless but did not resonate with the stature of the Racette Butterfly. The Pinkerton was tenor Brian Jagde, a recent Adler Fellow who does not have the refinement necessary to appear on a major stage (the War Memorial claims it is). It was a raw performance, made embarrassing by the strutting onto the stage apron (and even upon the prompter box) to attempt to impress us with his high notes. This young tenor will perform Pinkerton at Covent Garden, casting that is surely manifestation of artistic anti-Americanism. Current Adler Fellow Julius Ahn is not a big enough performer to fill the Goro pants in a major production.
Michael Milenski