The Rossini Opera Festival’s answer to this question was inspired. Its conceit was to stage a semi-staged Barber, stripping the production of any pretense of importance, and avoiding the thankless challenge to some unfortunate stage director of discovering a brilliant new perspective (there are those who remember the Pesaro staging some years ago by Luigi Squarzina — he placed the action in the Teatro Anatomico [the medieval dissection room] of Bologna’s famous, ancient medical school).
So now in Pesaro there was not even a stage director, but a class from the Accademia di Belle Arti di Urbino who conceived, staged, designed and executed the physical production (an un-named professor did admit to some coordination). There were approximately thirty twenty-somes who took a bow.
The production, and it was a fully staged semi-staged production, alternated between hijinks, caricature, slapstick, assault, nonsense and genius utilizing every inch and orifice of the Teatro Rossini to get us through the score we know so well. Most of it occurred on the floor of the platea (the orchestra section), deftly finding its way onto the stage apron for the big arias. “Largo al Factotum” and “Una voce poco fa” for example were delivered concert style but in magnified visual relief — Rosina clothed/costumed in a discrete concert black dress, Figaro decked out like an adventurous audience member clothes horse. 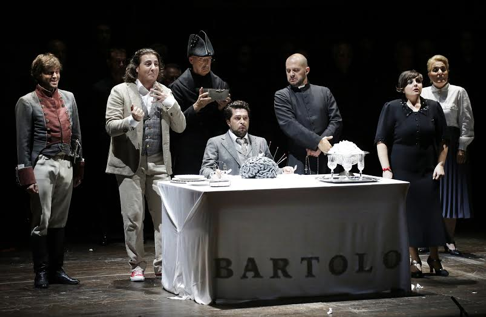 The big ensembles of course occurred on the stage, presentationally, and lest we forget that we were observers we watched a lone observer, patently passive, eternal, seated on the stage watching as well. The boxes in the walls of the Italian horseshoe theater were integrated into the action, audience so seated had to get out of the way when the action trampled through their box, the walls of the tiered horseshoe even transformed themselves into lighted scenery making the world a stage.
The staging was a series of lazzi (commedia dell’arte visual tricks) blown up to supersized proportion, and you were in the middle of it. This was the concept and it worked marvelously. It was a masterpiece of casting —excellent, matched singing actors who animated the Rossini magic of great music working through the age-old comic process — youth outsmarting age. And this production was just that — the creativity and exuberance of these Urbino students dismissed the experience, perspective and intelligence of a metteur en scËne.
It was also the limitation of this extraordinary evening. 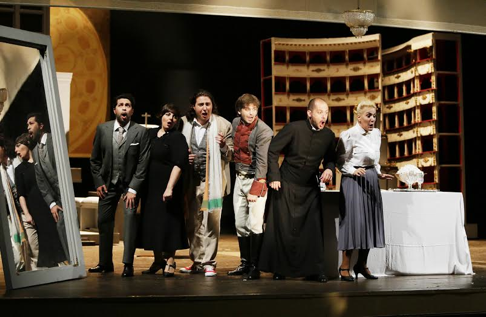 It was platinum casting. Young French baritone Florian Sempey may as well be named Giacomo Rossini. He is the spit and image of the twenty-four year-old Rossini of 1816, overflowing with musical energy and unfettered fun. His Italian was perfection, his patter exceeded the speed of light. In short he is the Figaro of your dreams. Upstaged, and then only briefly by Italian bass Alex Esposito as Basilio who in a simple black cossack fingering his rosary oiled his way onto the stage to deliver “la calunnia” knelt in fervent prayer, roaring divine strength and terror to Dr. Bartolo, confessionally kneeling as well. The Basilio of your dreams.
Italian baritone Paolo Bordogna achieved unusual presence as Bartolo, and won us over to a real understanding of a man obsessed by the delights of his table and his fear of germs. He was a not too old, not too ugly, just a fully humanized Bartolo whose obsessed patter too exceeded the speed of light, But he was foiled by the truly dumb antics of his coltraltino (a light voiced, high Rossini tenor) competition — what operatic tenors lack in intelligence they make up in fervor. This was Argentine tenor Juan Francisco Gatell who obliged Rossini’s idea of articulate, gurgling youth to the maximum.
Rosina, Sicilian mezzo Chiara Amar˘, needless to say stood in box overlooking the stage (displacing its inhabitants) while she was serenaded by Almaviva. She wore a big post-adolescent smile all evening, except when she sang, and then it was replaced by deadly serious, positively astonishing coloratura. The depth of casting included a sixty-some Berta, that of sixty-some Italian soprano Felicia Bongiovanni, and even a strong voiced Fiorello, Andrea Vincenzo Bonsignore, who displayed intimidating smarts and later, as the Ufficiale, entered the auditorium astride the full-sized rolling horse we saw in the lobby as we entered the theater.
Not to forget the male chorus, members of the local amateur chorus, the Coro San Carlo di Pesaro, who filed on and off the stage, concert style, to wheezily debunk whatever possible sense of fancy opera that might still be present. This wonderful Coro completed the sense of community — Rossini, artists, audience — that the perpetrators of this evening succeeded in creating.
It was finally an evening about words, every word of the comedy clearly articulated and understandable. This was made possible by the perfection of the pit. Young Italian conductor Giacomo Sagripanti coaxed the members of the orchestra of the Teatro Comunale di Bologna to an always comfortable level of delirium that supported and completed the delirium of the singers and the staging. This careful balance in fact made the young Rossini the true star of the show.
Michael Milenski