Huang Ruo’s opera, Sun Yat-sen, depicts a seminal period in Chinese history. The opera contains both romance and documented history. Sun was a charismatic leader who tried to unify China and bring it into the modern world. Since his first wife, Lu Mu-zhen, had the traditional bound feet of an upper class bride, she was not able to keep up with Sun’s travels and many political appearances. Eventually, he found a more suitable companion in Soong Ching-ling.
Act I shows Ching-ling’s parents, Charlie Soong and Ni Gui-zhen, collecting money for Sun’s Revolutionary Alliance. Soon after Sun arrives, a messenger tells Charlie that there is a price on the leader’s head. During that visit Sun falls in love with Ching-ling, however, and their union will eventually become a part of history. In Act II they marry while exiled in Japan, after the self-sacrificing Mu-zhen grants him a divorce. Act III shows the couple’s return to China where the political strife continues. One terrible night Ching-ling miscarries while she and Sun are trying to escape from assassins. The finale of the opera shows a huge statue of the iconic leader, Sun Yat-Sen, and indicates his place in history.
By emphasizing the love between Sun and his second wife, Ruo showed us the human side of this universally revered modern Chinese leader. Also an important figure in modern Chinese history, Soong Ching-ling was vice-president of the People’s Republic of China until she died in 1981. Writer Lindsley Miyoshi has quoted the composer as saying that the opera is “about four kinds of love.” It speaks of affection between friends, between parents and children, between lovers, and between patriots and their country. 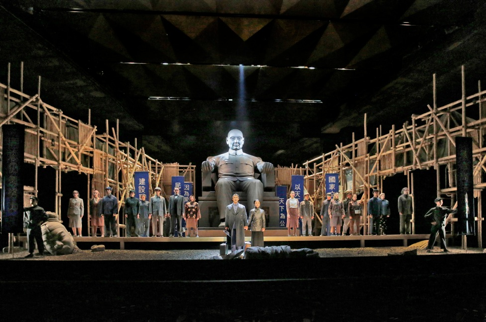 Joseph Dennis as Sun Yat-sen and Corinne Winters as Soong Ching-ling
Although Chinese censors passed the opera, planned performances were eventually cancelled. Chinese tenor, Warren Mok, cancelled his Santa Fe appearances saying he had to return to Asia. Thus, American apprentice tenor Joseph Dennis found himself interpreting the title role with less than two weeks’ notice. A genuine trouper, he passed this trial by fire magnificently with high notes of gleaming bronze. The rest of the cast of was equally fine. Corinne Winters, especially, was an impressive Ching-ling. Winters is a graceful singer and an outstanding actress on the opera stage. Her lament in Act III, Scene 1 was profoundly moving.
Dong-Jian Gong was a most believable Charlie. MaryAnn McCormick sang the role of his wife with a glowing, warm mezzo. Chen-Ye Yuan and Katherine Carroll as Mr. and Mrs. Umeya made their characters come to life. Rebecca Witty was vocally and histrionically impressive as Sun’s first wife. It will be interesting to see her in a larger part.
Director James Robinson created a realistic atmosphere and decorated it with stylized dances by Se‡n Curran. Allen Moyer’s practical bamboo sets indicated the constant construction of the new government. It culminated in the appearance of a giant figure of the immortal leader. Conductor Carolyn Kuan led the excellent Santa Fe Opera Orchestra in an eloquent rendition of Ruo’s wonderfully well-orchestrated score. Ruo’s Chinese instruments gave the work its driving rhythms while his distinctive lyricism and affecting vocal writing produced its more romantic moments.
Maria Nockin