The year is 1813, Rossini is 22 years old. He has two huge successes in Venice — L’italiana in Algeri, his first big comedy (there were seven smaller ones before), and Tancredi, his first big serious opera (there was two previous smaller ones). But on December 26 his next opera seria, Aureliano in Palmira is a flop at La Scala. [These are reminders for Rossinians.]
The libretto of Aureliano in Palmira is by La Scala’s librettist, the prolific Felice Romani who provided the librettos for all three Rossini La Scala commissions — Il Turco in Italia (1814), and Bianca e Falliero (1819) make the three. Romani is best known and appreciated for his many librettos for Donizetti and Bellini.
Most Romani librettos were set by multiple composers, though the three Rossini librettos were only set by Rossini. The turco in Italia libretto is dramatically quite complex enabling a stage director to produce it just now at the Aix Festival as Pirandello’s Six Characters in Search of an Author, a concept it wore perfectly. The libretto Aureliano in Palmira is no less complicated, compacting three or more major battles and their motivations and aftermath into two confusing acts. As is opera’s wont the libretto transforms documented military history into affective opera history which we Rossinians find far more real than mere history anyway. 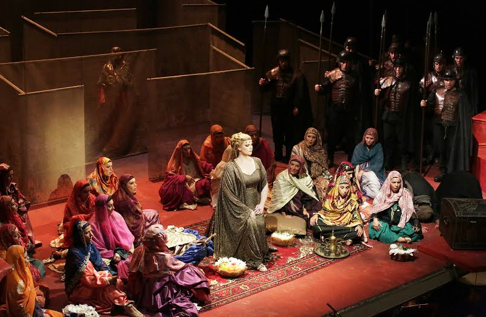 Jessica Pratt as Zenobia
The Aureliano in Palmira libretto by Felice Romani was famously the cause of the failure of the opera. The librettist felt the need to defend his work, saying that he was never “discostato un momento dal verosimile” meaning that his story at least always seemed real, or that it could have been real. It was up to Rossini then make it real. The contemporary perception was that he did not, the fault of the singers, said Rossini. But it was a big job — they had to deal with the undying love of the Prince of Persia and the Queen of Syria thwarted again and again by the might of the Roman Empire led by the Emperor Aureliano who lusted intermittently after the Syrian Queen while never wavering from his military objectives.
It is hard to fault the quality of the music of Aureliano in Palmira because Rossini simply recycled it two years later into Il barbiere di Siviglia which was a flop too. But only at first. It quickly became one of the repertory’s more esteemed masterpieces. So Rossini was right, there was nothing wrong with the music.
The Rossini Festival had given us a simply splendid Barbiere the night before, so all of the tunes and colors were fresh in our ears. It befell the American conductor/scholar/critic Will Crutchfield to transform these musical lines and colors into intense periods of amorous passion, passionate rejection, heart breaking sorrow, vivid denunciation, etc. Miraculously he succeeded more or less. He did securely ground the performance in opera seria, transferring the onus upon us, the audience, to forget what we know so well. It was not always possible. 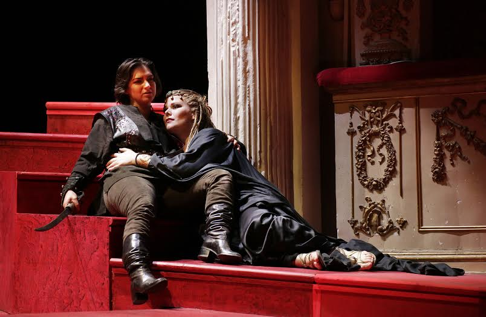 Lena Belkina as Arsace, Jessica Pratt as Zenobia
The Rossini Festival entrusted the production of this difficult opera to director Mario Martone who couldn’t quite fit it onto the stage of the Teatro Rossini, clumsily spilling a Roman column and a throne out over the orchestra pit. Gratuitously some entrances onto the stage were made through from the audience, plus the chorus was often spread out onto the stage apron and left there, exceeding the boundaries of imagination imposed by the proscenium. These naive attempts at theatrical immediacy gave way to claustrophobia.
Filmy panels of various sizes flew in and out to make mazes, tents, battlefields, palaces, and mountains. Plus there was an elevated walkway hidden behind the brown backdrop that from time to time revealed soldiers, refugees, etc., trudging to and fro. That was it. Except for four real, live goats who burst onto the stage during a lovely chorus (though Asia may be in flames peasants rejoice in the freedom and poverty of their fields). Yes, one goat squatted to pee thereby adding a river.
The emperor Aureliano was sung by American tenor Michael Spyres, a believable general, a believable actor and a very good bel canto singer. Mr. Spyres does not possess the high notes to make Aureliano a Rossini hero. Zenobia, Queen of Syria, was sung by statuesque Australian soprano Jessica Pratt. Mme. Pratt has strong, secure high notes that impress audiences. She does not move easily on the stage. Arsace, the prince of Persia, was sung by Uzebekistan mezzo Lena Belkina, an accomplished singer who projects the feeling that she wishes she were somewhere else, or at least that you were not looking at her. The production did not make it clear who Publia was. Sung by Raffaella Lupinacci, Publia suddenly professed to be in love with Arsace in her one aria, and for a moment we had the hope that she and he would get together, that Aureliano and Zenobia would get together and the opera would end. It didn’t.
Michael Milenski