The OpÈra de Marseille revived the 2004 Toulouse production of L’elisir d’amore as its holiday season confection. And quite a confection it is. Former Nicholas JoÎl assistant Arnaud Bernard and his designer William Orlandi envisioned Donizetti’s hyper sentimental story as a series of early twentieth century photographs (a sepia tinged silver color palate), and took the concept a step further by constructing a stage that was a series of shutters (complex flats that moved somewhat like the shutter of a still image mechanical camera).
There were complicated, sometimes amazing scenic moves, that included a disintegrated figuration of the shutter flats when we learned that Nemorino had become rich. Of course there were many visually splendid freezes, some self consciously posed for an on-stage old fashioned larger-than-life prop camera. 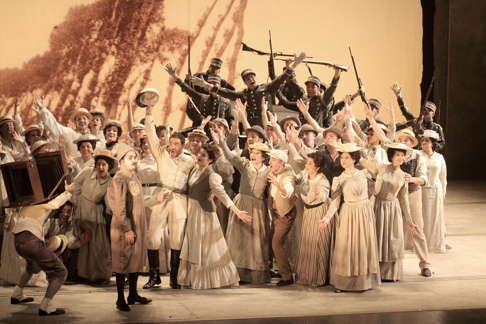 Set and costume design by William Orlandi
Yes, of course there were period bicycles that circled the stage (including a precarious ride by the diva), and there was was the antique automobile that brought on Dulcamara, an absolutely splendid car by an unidentified luxury maker that had been structurally reinforced to permit actors to climb all over it (Nemorino was exceptionally agile), and yes, of course there was the miniature model of the car as well, parked upstage with its tiny highlights on to oversee the consummation of the story (that Adina and Nemorino do in fact love one another).
Bel canto operas are indeed about singing, and Elisir is a series of arias, duets and trios that easily convince you, at least for the moment, that this opera must be the epitome of the style. Metteur en scËne Arnaud Bernard’s snap shot concept at best set the stage for the singers to present themselves in specific musical moments to be remembered (i.e. visual moments where the bel canto could really rip). At worst the complex staging overwhelmed if not ignored Donizetti’s easy, satisfying sentimentalism.
The singers therefore had the challenge to live up to the production. Nemorino, Italian tenor Paolo Fanale, came the closest. While Mr. Fanale may not possess the sweetness of voice or character to be the ultimate Nemorino, he does possess the artistry to have delivered an absolutely exquisite “Una furtive lagrima,” the highpoint of the performance well recognized by the audience. This fine artist gamely executed the considerable antics required by the stage director. 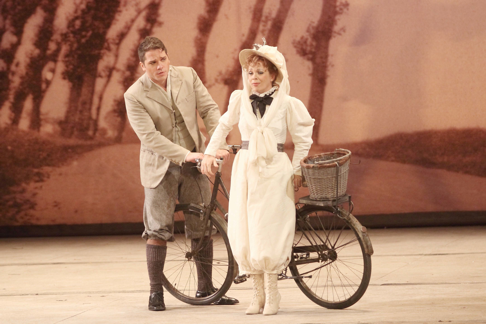 Paolo Fanale as Nemorino, Inva Mula as Adina
Veteran soprano Inva Mula who recently sang Desdemona both in Marseille and at the ChorÈgies d’Orange competently managed the vocal and histrionic demands of Adina (as she had in San Francisco Opera’s 2008 Elisir when she had had to find her way through middle American cornfields in some heavy handed Americana). Her impressive vocal technique served her well though it revealed the strains of maturity when she did not secure satisfying pitch for her high notes, and it came across as mere competence in Adina’s spectacular “Prendi, per me sei libero,” not the joyous exuberance of singing so many notes so fast.
Argentine baritone Armando Noguera sang Sargent Belcore, late in the evening displaying some lovely coloratura in an otherwise underweight performance. The same may be said of the Dulcamara of Italian baritone Paolo Bordogna, a veteran of many roles at Pesaro’s Rossini Festival who well displayed his fine buffo instincts but who was dwarfed by his automobile and his magician costume. Gianetta was nicely sung by French soprano Jennifer Michel, evidently cast because she could sing the role rather than create the character.
It was not clear what was going on in the pit. Italian conductor Roberto Rizzi Brignoli seemed to be trying to conduct Donizetti’s opera while the stage was laboring to do Mr. Bernard’s production. The stage seemed to have the upper hand, after all it took a lot to execute all those antics — and while the shutters moved flawlessly they might not have. There was little synchrony between the pit and stage, and there seemed to be little synchrony between conductor and the orchestra players, who seemed reluctant or maybe technically unable to enter the bel canto spirit.
Finally Mo. Rizzi Brignoli and tenor hit it off magnificently in “Una furtiva lagrima,” and the maestro seemed at last to capture the spirit of Donizetti with his orchestra. Any hope for synchrony with the stage remained futile.
Michael Milenski