The updating was only evident in the text. None of the music was changed, although Los Angeles Opera cut a good bit of it for the performances at the Barnsdall Gallery Theatre. On opening night, January 16, 2015, stage director Melissa Crespo told the story of undocumented workers in today’s California caught in the same situations that librettist DaPonte and author Caron de Beaumarchais wrote about over 200 years before. Just as in the original, the servant who had to be clever in order to keep his job also learned how to outwit his master.
In the Guerrerio version, Count and Countess Almaviva became the wealthy Mr. and Mrs. Conti. As a child, Figaro was found in a Rosarito bar wearing a Dodgers cap inscribed with the words Baby America. Thus, he insisted that American parents left him there. Susana was an undocumented worker from Mexico whom Mr. Conti threatened with deportation if she did not sleep with him. The most interesting character was the youngster that Guerrerio created to replace Cherubino: Bernard Curson, known as hip-hop artist Lil’ B-Man. This scruffy teenager was in love with every woman on the property while singing Mozart, but with Bradon McDonald’s imaginative costuming, tenor Orson Van Gay II appeared to be a wild eyed rapper. 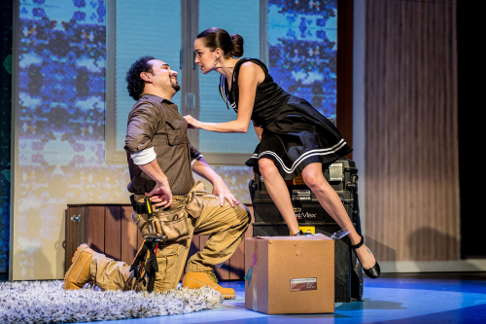 JosÈ Ad·n PÈrez and Maria Elena Altany as Figaro and Susana
JosÈ Ad·n PÈrez was an endearing Figaro whose antics seemed entire logical, but vocally he was no match for Craig Colclough who sang a memorable rendition of Mr. Conti’s music. Maria Elena Altany was a charming Susana who sang with a small but untiring voice. As Roxanne Conti, Greta Baldwin was a cool beauty with a soaring, creamy sound. Many characters were changed visually, but they all had to sing their usual lines in the ensembles.
Don Curzio became Bernard’s mother, Donna Curson, who tried hard to chaperone her son and young Barbara Conti. Amber Mercomes was an efficient Donna and Hayden Eberhart a delightfully gothic Barbara. Basilio, the dancing master, became Basel, an amusing English teacher who wore pink shoes. Tenor Haqumai Waring Sharpe played him to the hilt while singing with exemplary diction.
Miki Yamashita as businesswoman Soon-Yi Nam was the modern Marcellina who had brought Susana across the border. As Babayan, her enforcer, F. Scott Levin sang Bartolo’s quick and demanding patter with aplomb. Eventually, they admit to being the parents who left baby Figaro in Rosarito. As with the original opera, everything worked out perfectly in the end. Roxanne Conti forgave her philandering husband and Figaro, now a citizen, was able to marry Susana and keep her from being deported.
Performed in a three hundred-seat hall, Figaro 90210 was accompanied by piano, two violins, cello, bass and guitar. Conductor Douglas Kinney Frost brought out all the memorable melodies in the original score and after the first few minutes the listener was no longer conscious of the size of the orchestra. This was a very different version of the Mozart-DaPonte masterpiece, but it worked well in Southern California. The audience loved it and at least one extra performance has had to be scheduled.
Maria Nockin