In 1862 the Imperial Hofoper orchestra in Vienna spent nearly 18
months and over 70 rehearsals trying to work out how to play the score of
Tristan und Isolde before finally giving up and declaring the opera
un-performable. Fortunately in the intervening years, what is arguably the
finest opera orchestra in the world has overcome its initial trepidation and
since 1883 under such great conductors as Gustav Mahler, Herbert von Karajan,
Karl Bˆhm and Carlos Kleiber, the orchester der Wiener Staasoper has
become almost the definitive interpreter of this extraordinary,
ground-breaking, kaleidoscopic, indescribably complex and fathomless
partitura.

Taking over from the ignominiously departed former Generalmusikdirektor
Franz Welser-Mˆst, maestro Peter Schneider (who first conducted the opera
in Vienna some 25 years ago and has been the regular Tristan
dirigent in Bayreuth since 2008) is certainly no stranger to the
score. Rather like other dependable Staatsoper routiniers of
the past such as Horst Stein or Berislav Klobu?ar, there were generally no
nasty surprises in tempo or tonal balance and the Vienna orchestra was able to
display its prodigious skills to the utmost. Whilst the incandescent, almost
manic passion of Bernstein or Kleiber is definitely not part of Schneider’s
conducting persona, from the sublime cello ‘ blickmotiv’ at
measure 18 in the Einleitung to themusically orgasmic soaring
first-violin crescendo passages begining at Hellend, schallend
during Isolde’s monumental Verkl‰rung, the Vienna strings
demonstrated their unique honey-toned quality which is justifiably legendary.
The brass and wind sections were no less impressive and even the maudlin and
slightly loopy cor anglais solo starting at measure 9 in Act III Sc. 1 was
played with meticulous attention to the endless minutae of the score. It is
hard to think of an operaticpartitura (especially one lasting more
than 4 hours) which is so suffused with varying shades of
crescendo-diminuendo/sff/spp markings ,
finelynuanced rubati and ceaseless subtle tempo changes
and the Vienna orchestra seemed to strive to perfect each one in proving that
their predecessors 160 years ago were wrong. 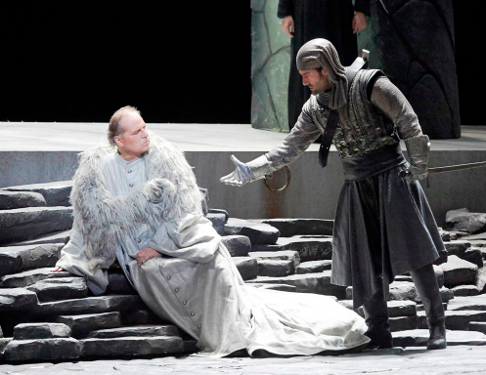 Albert Dohmen as King Mark and Gabriel Berm˙dez as Melot

Sadly perfection is not the word which springs to mind when considering
David McVicar’s production which was first staged here in 2013 with Peter
Seiffert and Nina Stemme in the titles roles. The stage design by Robert Jones
got off to a good start with Tristan’s ship looking rather ominous and
skeleton-like but also practical as it rotated on the stage to accomodate the
small scene changes in Act I. A large moon which rises during the
Einleitung changed colour according to shifts in the drama and created
a suitably spooky atmosphere. Energetic choreography for sailors by Andrew
George was also effective. But then things started to run aground. Isolde’s
apartment in King Marke’s castle in Act II was hardly a Cornish
Schloss Neuschwanstein. Wagner’s description of a garden
with high trees (Garten mit hohen B‰umen) was replaced with a rather
Spartan stepped-terrace dominated by an enormous phallic obelisk penetrating a
wooden nest-cum-wicker doughnut. No prizes for guessing the symbolism here.
There was so little direction in the immensely long duet in Act II Sc. 2 which
ends with the rapturous Ohne Nennen, ohne Trennen, the performance
could have been in concert version. Continuing the downhill slide, by Act III
Tristan’s ancestral castle in Brittany was nothing more than a pile of
rocks – quite a difference frommerely untended and overgrown
(schadhaft und bewachsen)as stated in the
libretto – and his bed of recuperation was a cross between a wooden deck-chair
from Anything Goes and an uncomfortable chaise-longue with a
crucifix-contoured back. Isolde’s ecstatic concluding Verkl‰rung
was sung to an empty stage (if one ignores the dead bodies of Tristan,
Melot and Kurwenal laying around) despite her singing Seht ihr’s, Freunde
at measure 5. At the end of the scena, instead of collapsing
insensate over Tristan’s body as Wagner required and the union, even in
death, of the two illicit lovers being graciously blessed by Kˆnig Marke
(Isolde sinkt, wie verkl‰rt…sanft auf Tristans Leiche. Marke segnet die
Leichen), Isolde just walks away – presumably to find more hˆchste
Lust back in Ireland.

Of the singers, only the Tristan of reliable war-horse Peter Seiffert (his
debut in Vienna was in 1984) remained from the original cast of two years ago.
Herr Seiffert still has all the notes and the tortuous high tessitura of the
role held no terrors whatsoever. His lengthy scena with Kurwenal in
Act III Sc. 1 was powerfully sung with a true Heldentenorklang
(especially the top ff Ab and A natural on Sehnsucht
nicht) whilethe more lyrical mezzavoce passages in
D¸nkt dich das were elegantly phrased. Unfortunately there is
something inescapably unconvincing about Kammers‰nger Seiffert’s
extremely large stage appearance. There was none of the emotional intensity of
Jon Vickers or the sheer sexiness of Peter Hofmann. Belonging more to the older
‘stand up and sing’ school, this interpretation was a long way from the
all-conquering hero (dem Helden ohne Gleiche) and even further from
the personification of Schopenhaurian Die Welt als Wille philosophy
which had such a profound influence on Wagner in the conception of this
tradition-shattering Handlung.

Following a long list of Swedish dramatic sopranos bringing distinction to
the role of Isolde (eg. in Vienna alone Catarina Ligenza, Berit Lindholm and
Nina Stemme — not to mention the incomparable Birgit Nilsson) IrÈne Theorin
had a lot of hard acts to follow. Having previously sung the role in Bayreuth
in 2012 (again under Peter Schneider) and recently Br¸nnhilde
(Gˆtterd‰mmerung) at La Scala under Barenboim, Madame Theorin has impressive
credentials. Prowling around the deck of Tristan’s ship in Act I like an
exotic caged animal, she certainly looked convincing and her fury in
Entartet Geschlecht…Zerschlag es dies trotzige Schiff was quite
terrifying. At the outset there was a troubling wobble in the voice, especially
in the middle register but as the opera progressed, a less woolly and better
articulated sound prevailed. There were consistent problems with poor diction
however which did not improve. This is a soprano who is also singing Venus in
Vienna so her vocal range is formidable. The high B naturals on geb er es
preis and mir lacht in Act I Sc. 3 had a true Nilsson-esque ping
and the celebrated Mild und leise was as memorable for its restraint
as the bravura top G sharps. The final pp F sharp on Lust was
especially well taken.

Making her Staatsoper debut as Brang‰ne, Tanja Ariane Baumgarnter
was under-voiced and dramatically far too passive for such a pivotal role.
Considering this part has been performed in Vienna by such powerful singers as
Ruth Hesse and Marjana
Lipovöek (even Christa Ludwig), this was an unsatisfactory substitute for
the production’s original Brang‰ne of Janina Baechle. Kˆnig Marke was well
sung by experienced bass (and regular Wotan) Albert Dohmen who looked like an
Old Testament prophet in drag but showed exceptional dignity and real sadness
when confronted with proof of Tristan’s treachery in Act II Sc. 3 (warum
so sehrend, Unseliger, dort nun mich verwunden?) The smaller roles of
Melot (young Spanish baritone Gabriel Berm˙dez); Ein Hirt (Carlos
Osuna); der Steuermann (Il Hong) and Stimme eines jungen
Seemans (Jason Bridges) were all competently sung with some very credible
acting from seÒor Berm˙dez. The most impressive performance of the evening
however came from Polish baritone Tomasz Konieczy as Kurwenal who seems to be
making quite a career in Vienna, singing five roles in the 2014-15 season.
Despite David McVicker’s odd direction of Kurwenal being drunk in Act I, he
still managed to display an extremely impressive projection, a bright, forward
placed warm timbre and a ringing top register (essential to the
tessitura of the role) with an excellent stage presence. The
extremities of range inDas sage sie in Act Iwere mastered
with not only outstanding vocalization but delicious malice as he deliberately
enflamed Isolde’s ire. His interaction with Tristan in Act III Sc. 1,
especially at selig sollst gesunden was beautifully phrased, while the
top F natural on Ehren Tristan mein Held had a real clarion quality.
It would seem that Mariusz Kwiecie? has a serious rival in the top Polish
baritone stakes.

Apart from one brave booer, audience reaction to the performance was wildly
enthusiastic. Epic Wagner evenings usually attract a different kind of opera
goer and there was far less Prada and black-tie and much more parka and
pullovers than is customary in this grandest of grand opera houses. An eclectic
crowd ranging from incredibly serious Wagner-nerd types in the
Stehpl‰tzeto inscrutable Viennese in the loges
mixed with a surprisingly large number of baffled, if not wretchedly
bored-looking Asian tourists. Five hours of Wagner for any operatic neophyte is
a big ask. It seems the Wiener Staatsoper has become just another
5-Star TripAdvisor attraction in the Austrian capital and ticket sales
are over 99.6%. Whether a less discriminating audience is having an effect on
the overall quality of performances is a contentious issue but certainly to
maintain absolute excellence in a repertoire of 49 operas with 6 new
productions over a 10 month period is an almost impossible task. Adequate
rehearsal time, especially for revivals, is clearly a major logistical problem.
Fortunately the orchester der Wiener Staasoper is more likely to rise
to the occasion than many of the singers on the roster, even if it occasionally
takes them 20 years to learn the score.