Prosper MÈrimÈe serialized his novella, Carmen, in the Revue des deux Mondes in 1845. It came out in book form the next year. The author said his inspiration was a tale the Countess of Montijo told him when he visited Spain in 1830. He said, “It was about that ruffian from M·laga who had killed his mistress.” Then he added: “As I have been studying the Gypsies for some time, I made my heroine a Gypsy.” MÈrimÈe may also have been influenced by Alexander Pushkin’s narrative poem The Gypsies, a work MÈrimÈe translated into French.
The novella is very different from the opera. The book tells of JosÈ Lizarrabengoa, a Basque hidalgo from Navarre, whereas the opera is about the Gypsy, Carmen. MicaÎla, Frasquita, and MercÈdËs do not appear in the novella. Le DancaÔre, is only a minor character in the story, while Le Remendado is killed by Carmen’s husband one page after his introduction. Escamillo, whom MÈrimÈe calls Lucas, is seen only in the bullring. Only one major facet of the story is true of both novella and opera: JosÈ is fatally attracted to Carmen. 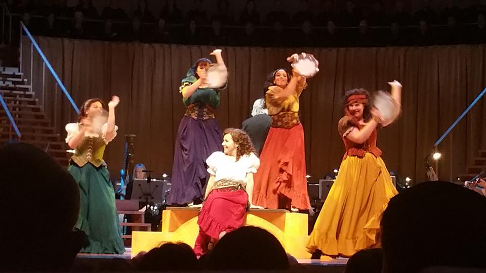 Gypsy Dance: Amanda Opusynski, Milena Kitic and Sarah Larsen with dancers
On February 19, 2015, Pacific Symphony presented its annual performance of a semi-staged opera. This year’s presentation at the Segerstrom Center for the Arts in Costa Mesa, California, featured Georges Bizet’s Carmen. Director Dean Anthony used the front of the stage and a few solid set pieces by Scenic Designer Matt Scarpino to depict the opera’s various scenes. Of course, Kathryn Wilson’s well-coordinated costumes and the ambience created by Kathy Pryzgoda’s lighting added a great deal to the cast’s ability to tell the story.
Milena Kitic, who has sung Carmen with opera companies around the world including the Metropolitan Opera and Opera Pacific, was an energetic Gypsy whose rich, lustrous golden tones soared over the orchestra and into the excellent acoustics of the 2000 seat hall. Tenor Andrew Richards was an outstanding Don JosÈ who mastered both the dramatic and the lyrical aspects of his role. The score of Carmen calls for substantial orchestral power and Richards’ voice sailed over it with ease. The surprise was that he was able to scale it down to the sweetest of pianissimos for the final notes of the “Flower Song”.
The Violetta in Pacific Symphony’s performance of La Traviata, Elizabeth Caballero, was a thoughtful MicaÎla who made the audience realize what a good life JosÈ would have had if he married her. A versatile lyric soprano, she sang with strength when it was called for and with limpid, radiant tones in more lyrical moments. Konstantin Smoriginas swaggered into Lillas Pastia’s cafÈ as the reigning bullfighter and sang his “Toreador Song” with resonant, robust sounds. He seemed to be having fun with the role and the part fit him perfectly.
Soprano Amanda Opuszynski and mezzo-soprano Sarah Larsen portrayed Carmen’s friends, Frasquita and MercÈdËs. Since Carmen and MercÈdËs had lower voices, it was up to Frasquita to sing the high notes and Opuszynski came through with flying colors. Larsen’s bronzed tones provided colorful harmony. As MoralËs and Zuniga, Keith Harris and Andew Gangstad were credible soldiers who sang with dark tonal colors. Harris also portrayed Le DancaÔre, who together with Jonathan Blalock as Le Remendado, added to the dramatic coherence of the gang of smugglers.
Currently, Music Director Carl St. Clair is marking his twenty-fifth season with Pacific Symphony. He has guided its growth and it is now the largest Symphony Orchestra to have been formed in the United States during the past fifty years. Before he came to Costa Mesa, much of his background was in opera which he still conducts magnificently. His tempi were incisive and he brought an infectious verve to Carmen’s unforgettable melodies. It would be wonderful to hear him conduct more opera in the near future. We know that Pacific Symphony will do another opera next year. I for one very much look forward to it.
Maria Nockin