These brief operas have interesting points of convergence, both are love triangles with older men and younger wives. both have physically unattractive protagonists, both are set in Italy. The librettos for both were written in the early 1890’s. And both are just plain ugly stories.
Nonetheless there are striking, irreconcilable differences that prevent them from creating a soul satisfying evening of opera. I pagliacci (1893) is one of the masterpieces of the startling new verismo movement in Italy. A Florentine Tragedy (1917) came 25 years later, captive of the psychological and musical complexities of the collapsing Viennese cultural hegemony. Simply said I pagliacci remains a fresh, new piece and A Florentine Tragedy rests a derivative attempt to revive lost musical enthusiasms. Namely and unabashedly the scandalous excitement created by Salome, Electra and Rosenkavalier. 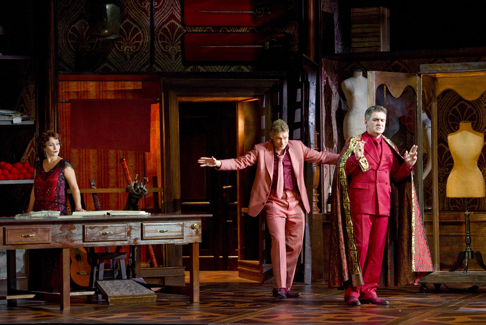 Barbara Haveman as Bianca, Carsten Wittmoser as Simone, Zoran Todorovich as Guido
Zemlinsky’s rendering of Oscar Wilde’s sick little tale was simply Zemlinsky getting even with Gustav Mahler for being more attractive to Alma Mahler than he was. And, well, making an opera about Alma Mahler’s affair with the architect Walter Gropius while she was married to Mahler. It is a very personal, vindictive work.
It began the evening. When it was over the audience could not get to the bar fast enough.
Metteur en scËne Daniel Benoin would have nothing to do with Zemlinsky’s monumental (triple or quadruple winds, six horns, huge percussion battery) pettiness and therefore set out to find a less gossipy context for this sordid tale. He moved the action from 16th century Florence to the Italy just a bit after 1917 and the emergence of Fascism. Simone (the older husband) exits his shop from time to time, passing the Black Shirt recruiters visible though the huge shop windows. For the dÈnouement he returns to his shop in full Blackshirt garb (he strangles young, old-order rich Guido). Simone and his young wife Bianca reconcile and the strong, new Italy is born!
The Zemlinsky opera is enormously enriched by this concept, given that Zemlinsky’s music does not really allow us to enter into the psyches of his actors (as, for example, Strauss had) but instead keeps us enthralled in the web of subterfuges Simone is creating to murder Guido. Director Benoin allowed that we might participate in politically powerful propaganda that can possibly be found in, or matched by the music rather than in the petty jealousies that are not musically supported.
The inherent irony of decadent music of a collapsing empire building a strong new political order did not trouble Mr. Benoin who was having fun with his designers. Set designer Rudy Sabounghi created a richly traditional Florentine shop, gorgeous in scope and detail, the exposition of luxury fabrics though was limited to sample books [!], but at last yards and yards of real fabric fell from the rafters, some of which Simone used to strangle Guido.
Nathalie BÈrard-Benoin created costumes that were flagrantly and effectively at odds with the period details of the set, Simone in a monochrome rose modern suit, shirt and tie, Guido in a darker rose suit, shirt and tie. Bianca was in a Klimt inspired beaded dress and wigged firmly into the dying pre-fascist era.
It was a solid, sophisticated and amusing production richly conducted by Pinchas Steinberg who was unwilling to sacrifice the humors of Zemlinsky’s huge orchestrations when the singers were unable to sustain needed and appropriate volumes of sound. It was an orchestral, not a singerly event. 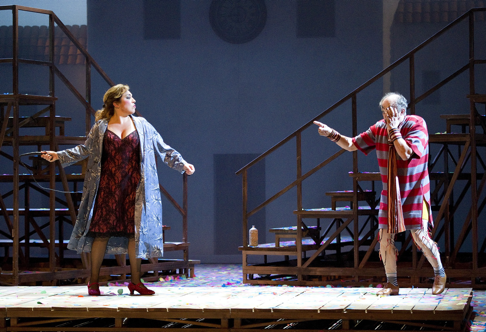 MarÌa JosÈ Siri as Nedda, Leo Nucci as Tonio
The exact opposite may be said of I pagliacci. It was very nearly a dream cast of singers who kept the audience in their seats applauding long after Canio had slaughtered Nedda. The pagliacci were opera stars baritone Leo Nucci and the estimable tenor Marcelo ¡lvarez, the Nedda was Argentine soprano MarÌa JosÈ Siri who thrilled us with the shimmering edge to her youthful tone. Silvio was Chinese born, Covent Garden trained baritone Zhengzhong Zhou whose exceedingly beautiful voice made the love duet with Nedda a meltingly beautiful few minutes. Peppe was carefully and charmingly etched by Italian tenor Enrico Casari. While conductor Steinberg did not fully capture the intense dramas of verismo he did give these superb singers tempos on which its lyricism could gracefully soar.
In fact the lighter weight and easier movements of Leoncavallo’s vocal lines felt much more at home in tenor ¡lvarez‘ voice than does Puccini’s Cavaradossi, surely this excellent artist’s signature role (recently sung at the Bastille). Baritone Leo Nucci is a nimble 72 years of age (he wanted us to know this by effecting a heel clicking jump now and again). He is in good voice and is still a viable Tonio. Soprano Siri, a Tosca in her own right (Vienna and Berlin), is young enough to be believable as a real Nedda and sufficiently experienced in the grand repertoire to bring real diva style to her portrayal.
The common element to both short operas was designer, Monaco native Rudy Sabounghi (director Benoin did his own lighting, Pagliacci was lighted by Laurant Castaingt). Sabounghi with Swiss metteur en scËne Allex Aguilera had us see through the back wall of a stage in order to create the conceit that we too are the actors since we feel what they feel — I pagliacci plays very heavily with the metaphor of theater.
It got even more complicated. The pagliacci started out as circus clowns, drumming up business for the upcoming performance, their public were country folk on the way to church. Though by the time of the performance of the play within the opera Tonio and Canio had dressed themselves in everyday clothes as they were dealing with their real, off-stage passions. Conversely the country folk now had transformed themselves into commedia dell’arte costumes, like the actors on the stage should have been costumed. This audience then was seated on the stage directly mirroring the Salle Garnier audience, thus it was they who were dealing with theatrical passions. We, the Salle Garner audience, were dealing with the real passions. Verismo indeed.
It all more or less worked in its weird way. Most of all it gave us something to get our minds around. Neither of the stagings found the essences of these strange little operas, nor were they looking for the them. It was a high-level, challenging and ultimately satisfying evening of opera.
Michael Milenski