The first roster features Tatiana Serjan as Floria Tosca the singer, Brian Jagde as her lover Mario Cavaradossi, Evgeny Nikitin as Baron Scarpia, Richard Ollarsaba as Cesare Angelotti, and Dale Travis as the Sacristan. The roles of Spoleta, Sciarrone, the shepherd, and the jailer are taken by Rodell Rosel, Bradley Smoak, Annie Wagner, and Anthony Clark Evans respectively. Dmitri Jurowski conducts the Lyric Opera Orchesta and Michael Black has prepared the Lyric Opera Chorus. For this version of Caird’s production Bunny Christie collaborates as scenic and costume designer. Serjan, Jagde, Nikitin, Wagner, Jurowski, and Christie are all in their debut seasons at Lyric Opera.
After the familiar opening chords of Act I, Angelotti — who has escaped from imprisonment — seeks refuge in the Church of Sant’ Andrea della Valle. Mr. Ollarsaba commences the action in this production by pulling aside a white sheet stained red, which had covered the stage, and which apparently indicated the violence associated with this version of the opera’s setting. Ollarsaba integrates his lines well into a depiction of Angelotti’s desperate yet successful search for the key to a temporary hiding place in the church. At his entrance Mr. Travis inhabits the role of the sacristan comfortably, fretting while keeping order yet good-naturedly accepting his duties. When Cavaradossi enters and asks after the sacristan’s actions [“Che fai?”], an innocent moment of interrupted prayer leads to a flood of lyrical sentiment. Already from those initial spoken words Mr. Jagde creates an earnest, believable hero. Once he climbs a steep scaffold to survey his painted work thus far, Jagde’s performance of “Recondita armonia” [“Oh, hidden harmony”] establishes his as a significant tenor voice not only for Puccini but also for other major composers as well. When singing in this aria of the “azzurro … occhio” [“blue eyes”] in his painted creation, he compares these to the “occhio nero” [“black eyes”] of his dear Tosca. At his moment Jagde’s voice takes on an Italianate warmth emphasizing both the artist’s inspiration and the lover’s devotion. In the concluding soliloquy to art his voice at first blooms with absolute control over pitch and forte volume, then ends the aria with an effectively shaded diminuendo on “Tosca, sei tu!” [“Tosca, it is you!”]. 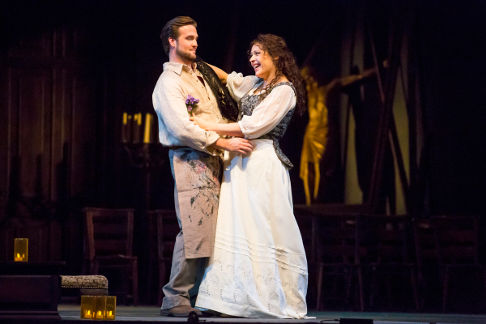 Brian Jagde as Cavaradossi and Tatiana Serjan as Tosca
A reunion with Angelotti, who emerges very briefly from hiding in the side chapel, is interrupted by Tosca’s calls to open the locked gate of the church. From the point of Ms. Serjan’s entrance it is clear that the Floria Tosca of this production fulfills a specific interpretation of the title character. Rather than relying solely on the persona of a singer celebrated throughout Rome, Mr. Caird’s Tosca projects a coarser image in keeping with the rural origins of the heroine in Vittorio Sardou’s play. Such depiction is apparent here in Tosca’s dress and movements, just as Serjan sings her lines at first with the intonation of an unsophisticated maiden. The attempt to fit this mold does not always suit Serjan’s voice. When she sings in full voice in keeping with the score, top notes seem occasionally uncontrolled as though the preceding interpretive model were thwarting vocal transitions. It is also at this point of the music-drama that Caird introduces a “spirit character” as a “child Madonna” or “ghost of Tosca’s innocence,” as explained in the program insert with the director’s note, “A New View of Tosca.” This “view” would have the heroine, and the audience, reflect on her past and youth at moments of religious fervor or crisis. The “child Madonna” disappears after Tosca’s prayer in front of the Virgin and thus allows for the moving love duet between the principals. Here Jagde again delivered an impressive flow of lyricism in both dialogue and the duet. When he claims to have painted the Marchesa Attavanti without being observed by her, the lines “Non visto, la ritrassi” were sufficiently expressive to convince any Tosca of his faithfulness. Jagde’s sense of legato throughout the duet is a noticeable asset, so that the words “Floria, t’amo” blend naturally with the surrounding attributes in his recitation.
When Tosca leaves for an engagement, Cavaradossi and Angelotti are able to devise a strategy for eventual escape from the menacing henchmen of the police chief. At the mention of the notorious official, Jagde colors the name Scarpia with a truly deprecating snarl. Cannon shots signal the imminent presence of the police, and both men flee from the church. The sacristan reappears and is surprised to find the interior deserted; soon he is surrounded by singing and dancing children, performed here by the Chicago Children’s Choir. Jubilation at the news of Napolean’s defeat comes to a halt with the entrance of Baron Scarpia. From the first Mr. Nikitin seems understated in the role, at times singing flat from the pitch. When Tosca reappears in search of her lover, Nikitin warms to the role. He sings his final “Va Tosca,” alternating with the clergy reciting the Te Deum, in rising, declarative notes. The orchestra under Jurowski’s lead captured especially the dramatic highlights at the close of the act. 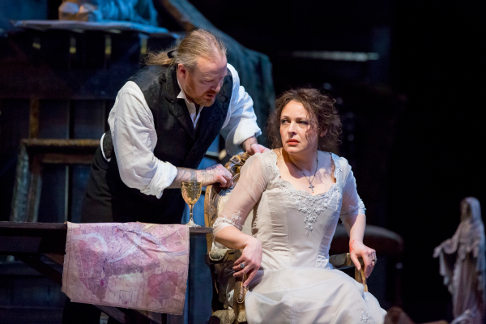 Evgeny Nikitin as Scarpia and Tatiana Serjan as Tosca
The interior of Act II in this production is described by its director as “a war-damaged renaissance ballroom,” suggestive of time periods later than that indicated by Puccini in his text. Scarpia’s lair seems to conceal a plan for his own subsequent survival during this period of political uncertainty. Given that directorial lead, the introspective recitations of Nikitin’s Scarpia at the start of the act match a calculating portrayal of the chief policeman. He hurls questions at Cavaradossi who has now been detained by the police and is kept in the presence of its chief authority. In this exchange Nikitin and Jagde spar believably for verbal control until the arrival of Tosca. Despite subsequent repeated torture offstage, Cavaradossi remains steadfast and warns Tosca not to reveal the hiding place of Angelotti. Yet in order to spare her lover further pain Tosca relents, allowing Scarpia to send his men in search of the prisoner. When a sudden announcement declares that Napolean has won in the battle at Marengo, Cavaradossi sings his paean to liberty beginning with the famous “Vittoria! Vittoria!” The forte pitches are here exact, and Jagde sustains these for an exciting delivery. When Scarpia and Tosca are left alone, the woman realizes that she must consent to the baron’s “altra mercede” [“other recompense”] in order to save her imprisoned lover. Before the violent conclusion, Tosca sings the summary of her life “Vissi d’arte” [“I lived for art”]. In this aria Serjan demonstrates the necessary control and vocal range to render the piece beautifully effective. Her final line of prayer in the aria, “Perche me ne rimuneri cosi?” [“Why do you repay me thus?”] is an especially touching display of emotional innocence. In the final moment of the scene Tosca’s violent act against Scarpia is here accompanied by the reappearance of the “child Madonna,” hence adding supplementary comment on the murder.
Act III will again incorporate the “child Madonna” at the opera’s close but first the figure appears as the young shepherd, and sings the latter’s aria at daybreak. A dead body, in dress reminiscent of Angelotti’s earlier costume, is hoisted up and remains hanging throughout the following scenes of the opera. The stars are visible through a large open window at the back of the stage. In the second scene Cavaradossi writes his letter of farewell to Tosca and muses on their love, now almost vanished. The mood is appropriately wistful and tragic, while the oboe introduction to the aria “E lucevan le stelle” [“And the stars were shining”] could be played more subtly. Jagde’s performance of this piece shows a careful sense of transition in volume matching the import of individual lines of text. His conclusion on “tanto la vita” [“life so much”] emphasizes the bared irony of treasuring love in the final moments of life. Of course, Tosca arrives almost immediately with information on the safe passage granted, Scarpia’s murder, and the plan for a mock execution. In their duet both Serjan and Jagde bloom in unforced glory to celebrate the renewed possibility of their love. The ultimate tragedy of this duet is borne out by the firing squad’s mechanical execution of Cavaradossi. When Tosca realizes her threatened position and final choice to evade the police, she looks one more time at the “child Madonna” before her leap from the window. This directorial hesitation is explained as a means to timing the suicide in tandem with the opera’s final chords, yet the implied delay leads to a possible question of Tosca’s resolve. New productions of standard opera will always provide interpretive possibilities and insights not before realized concerning an iconic score. In this production the opportunity to hear singing in keeping with the spirit of the work, especially that of Mr. Jagde, remains its principal advantage.
Salvatore Calomino