Muni designed the simple sets, directed the concentrated action and translated da Ponte’s text into interesting supertitles. In this production, Ildebrando D’Arcangelo’s Don was a bon vivant as well as a womanizer who sang with consistently satisfying resonant, polished tones.
Lorenzo da Ponte wrote the libretto for Wolfgang Amadeus Mozart’s opera Don Giovanni, basing his text on various legends about the famous Spanish seducer. Evidence suggests that the first fully dramatized version of the story was by a monk, Tirso de Molina (1579-1648), who published El burlador de Sevilla y convidado de piedra (‘The Trickster of Seville and the Stone Guest’) in 1630. Readers may remember that da Ponte was once ordained as a priest. De Molina’s Don goes to Hell as does the title character of JosÈ Espronceda’s 1840 poem El estudiante de Salamanca (‘The Student of Salamanca’), but some versions of the legend end differently. The protagonist in JosÈ Zorrilla’s 1844 play Don Juan Tenorio, receives a divine pardon. 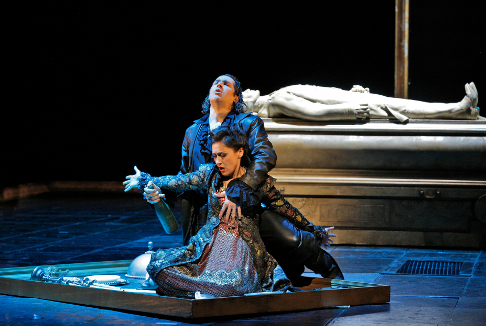 Ildebrando D’Arcangelo as Don Giovanni and MyrtÚ Papatanasiu as Donna Elvira
On Friday February 20, 2015, San Diego Opera presented Mozart’s Don Giovanni in a production by Nicholas Muni originally seen at Cincinnati Opera. Muni designed the simple sets, directed the concentrated action and translated da Ponte’s text into interesting supertitles. In this production, Ildebrando D’Arcangelo’s Don was a bon vivant as well as a womanizer who sang with consistently satisfying resonant, polished tones. A congenial Don, many in the audience would have preferred to sit down and have a beer with him rather than see him dragged off to eternal damnation.
In this opera many of the characters are conflicted. Often, they sing one idea while their music plays another. That gives the artist a great deal of room for characterization and many of them made fine portrayals. Especially believable was the Leporello of Ashraf Sewailam. Not only did he sing well, he never stopped moving. While his Catalog Aria thoroughly offended Donna Elvira, it fascinated the audience who gave it a well-deserved hand of applause. What is most amazing is that Sewailam was a last minute substitute. He is a most valuable artist indeed.
We will never know whether Donna Anna wanted to get away from the Don as she says, or if she secretly wanted to enjoy his advances as her music suggests. Ellie Dehn registered a wide range of emotional shifts with great delicacy while singing with glinting sonorities. As her fiancÈ Don Ottavio, Paul Appleby sang with radiant tones spun out in a stunningly beautiful legato. He is definitely a young singer to watch.
MyrtÚ Papatanasiu was a feisty Donna Elvira who thought she could change the Don’s ways. Like many women before and since, she found it could not be done, but she learned her lesson while singing with honeyed tones. Emily Fons and Kristopher Irmiter were most believable as Zerlina and her bridegroom, Masetto. Fons, who was a member of the young artist program at the Lyric Opera of Chicago from 2010 to 2012, seems to be at the onset of a most impressive career. Her singing was an iridescent wave of vocal color as she captured her character’s delicious moments of indecision. Kristopher Irmiter was a bold peasant who had to deal with the fact that a nobleman like the Don could kill him with impunity. Bass Reinhard Hagen sang the Commendatore’s low notes with thrust as he energized their text with conviction.
Chorus Master Charles Prestinari’s chorus sang in subtle harmonies and imbued the text with nuanced emotions. Dorothy Randall’s alert and stylish playing made the recitatives a joy to hear. Although conductor Daniele Callegari seemed to have a rather loose concept of the architecture of the opera, he held stage and pit together while allowing the singers enough room to breathe and emote. The resurrected San Diego Opera certainly put together a hit with this performance of the Mozart masterwork.
Maria Nockin