She is the Associate Producer for Boston Lyric Opera and the Director of Design and Production for Boston’s Guerilla Opera. She is also the resident set designer for the New York’s Attic Theatre Company. Some of her designs include: Bluebeard’s Castle for Opera Omaha, Xerxes for the Connecticut Early Music Festival, and Madama Butterfly for El Paso Opera. Her engagements for the 2015-2016 season are with Nationale Reisopera, Gotham Chamber Opera, Boston Lyric Opera, and Castleton Festival.

Today she drops by for an interview with our Maria Nockin.

MN: Julia, how do you come to have three citizenships?

JNM: My dad is Canadian and my mom is French. Thus, I was born with both of those. Since I went to graduate school in the United States, I became an American citizen. Some things have changed since Nine-Eleven. You used to have to relinquish your Canadian citizenship before becoming an American. Now you don’t have to do that anymore.

MN: Where did you grow up?

JNM: I grew up a little bit everywhere! First, I lived in Montreal, then in Paris. I’ve also lived in Belgium. My dad worked in research for a pharmaceutical company, so we traveled a great deal, but I went back to Montreal to do my undergraduate work at Concordia University. Originally, I wanted to be a physician and I began to study for it, but I got the design bug. I don’t regret it. I’m lucky to have discovered what I like to do at such a young age. A friend of mine who lived in my dorm said: “Julia, you are always at the theater or at the museum. You have art hanging in your room. Don’t you think you should do something that pertains to the theater? “ When I said I’m not a performer, he replied that there are other aspects of theater. Eventually, I did an internship in set design and I fell in love with the work. 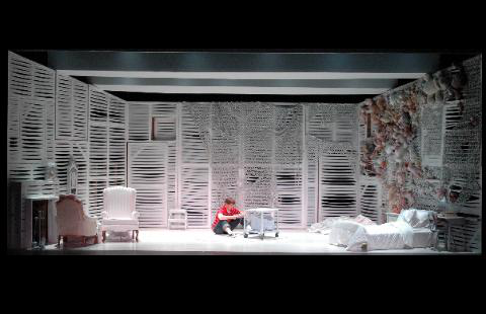 MN: What is your mission as a designer?

JNM: I want to make sure that the entire evening’s presentation is an event for the audience from when the doors open until they close. I want every performance to be as engaging and as exciting as possible. Opera in particular requires all the art forms to come together. In it there is not only singing and orchestral music, but also dancing and visual art. Although I am in the performing arts world, I feel like a visual artist. Many times people forget that.

When I was an undergraduate, I took a fabulous class called Performance for Designers. In it, they made us wear tight corsets and the highest possible heels. We had to perform on a raked stage on which normal chairs would topple over. That definitely made us think about whether or not performers could work comfortably within our designs. Some years later, one of my own students wanted his audience to sit on Astroturf. The next week that class sat on it. After twenty minutes some of them asked to return to the chairs. I told them that if they want the audience to sit on it for three hours, they could do it for the length of the class. Three years after that, I met a carpenter on a show who told me that her boyfriend still spoke of my “Astroturf class”.

MN: Did you get any significant insight from a teacher or mentor?

JNM: John Conklin is a colleague and a mentor that I met through Boston Lyric Opera. I have worked with him for almost four years. He is an incredibly talented artist and I get a thrill out of everything we work on together. He always approaches an opera with totally fresh eyes. I find it inspiring to see this man who has been in the business for many years rediscover each work that he approaches. If I can do a mere half of what he does, I will be immensely happy.

MN: What productions have you done with him?

JNM: With Boston Lyric Opera, he’s designed Rigoletto that also went to Opera Omaha and Atlanta Opera. Right now we are gearing up for next season, which includes La BohËme, Werther and The Merry Widow. I designed a set for La Traviata alone, too, but it is amazing to have John to bounce ideas off of.

One of the reasons I chose Boston University for graduate school was its Opera Institute. It was very important for me to attend a design school that had a close relationship with an opera department. A program with no opera would have been a waste of time for me. My relationships with singers would not be the same if I had gone to a school where students only designed for the theater. In Boston, I worked with the amazing Sharon Daniels who taught me what to worry about and how to deal with singers. The Institute had guest directors, as well. That helped me learn to deal with different working styles and enabled me to form important relationships. One of the directors I met in grad school was Nathan Troup who staged Francesco Cavalli’s La Calisto for Simpson College in January 2015. We’ve been working together for nine years now and have done over fifteen new productions.

Since I was in Boston, which is a composer’s town, I became connected with Guerilla Opera. I have been working with that company since its second year when it had musicians but no one working in production. Say It Ain’t So, Joe, was an opera about Sarah Palin and Joe Biden that I did with them. I really got the contemporary opera bug working with those people. All their pieces are commissioned, and I find it fascinating to work with composers and librettists as well as singers. With Guerilla Opera, a designer gets to work with creators from the beginning of their labors. The company has a residency at the Boston Conservatory and a little fifty-five-seat black box theater where we get to try all sorts of things.

Last year I worked on composer Ken Ueno’s chamber opera, Gallo, which features a soprano in a box filled with Cheerios and a countertenor in a chicken suit. The little rings made sounds but we figured out how to get around that. Unfortunately, many other companies don’t have a lot of resources or time to allow you to experiment. I love working where I can try all kinds of new ideas. 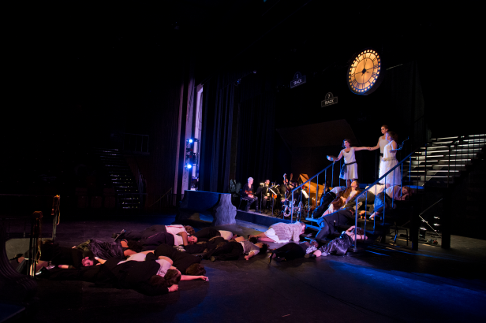 MN: What is your production of La Calisto like?

JNM: Our La Calisto is set in the glamorous era of the 1920s. All the gods have human characteristics and there is a great deal of gender bending. We set the action in a train station that becomes a nightclub. When the opera was performed at the Simpson College Theater, we placed Maestro Bernard McDonald’s orchestra in the center of the stage so that the musicians could be seen playing their period instruments. They were part of the nightclub, which was fun, too.

MN: What do you see yourself doing five or ten years from now?

JNM: I also have a degree in arts administration so I would like to be artistic director or advisor for a company, but I still want to design for other companies internationally. Next year I will do a show with Reisopera in co-production with Gotham Chamber Opera in Amsterdam and this summer I am going to the Castleton Festival.

MN: How do we assure the continuance of opera for generations to come?

JNM: There have been quite a few articles written saying that opera is dead in Boston. After reading three of them I became more than a little annoyed. I refuse to believe that opera is a dying art form. Although my studio is in New York, I have very close ties to Boston. I remembered that there was a New York Opera Party that brought all the city’s functioning companies together after the New York City Opera closed. Boston, too, needed to celebrate opera as a living art form. Last year I reached out to the artistic directors of its many companies and we had an exciting celebration with each company performing a song. Thus, we celebrated our rich and vast diversity within the opera world.

MN: What do you like best about designing for opera in the United States?

JNM: Many people have asked me why I live in the States and not in Europe. I believe that opera in the United States is on the verge of something very exciting. I think the art will reinvent itself because of its financial challenges. That scene will be very exciting for those of us who work in it.

When I did a Madama Butterfly in El Paso Texas I encountered a most amazing opera audience. The opera house is close to the border with Mexico. Standing in front of it I could watch the patrons walking across to the United States in their fancy opera clothes. I just loved seeing that.

MN: What kind of modern technology do you find most helpful?

JNM: I use every kind of technology that is available to me and appropriate to the piece. I love experimenting, too, but I know designers have to be careful that technology does not become a distraction. It has to help move the story along. When La Calisto was first staged, it had every possible bit of technology, but since then it has also been staged for smaller companies. Often they have lower budgets and we have to produce the same effects without using expensive tools. I do some shows on very large budgets and others on very tiny budgets. It’s the projects themselves and the possible collaborations with other artists that have to interest me, not the money involved.

Some aspects of opera in the United States are new already. I don’t think we could have had an Opera America Conference discussing site specific performance fifteen years ago. Boston Lyric and Long Beach Opera for example both perform in sites other than theaters. Seats have to be accessible and comfortable and site-specific opera is not necessarily cheap, either. We don’t have the usual theater infrastructure, so we have to make everything we need and we have to worry about sound balance. I love doing it, however, because it is an exciting challenge.

MN: Do you teach?

JNM: I would like to teach more and transmit the approaches that I have developed and the “Opera World” that I love to the next generation. However, I travel a lot and to be fair to my students, I only give guest lectures and take interns for the moment.

JNM: I love making the audience an integral part of the show. We must remember that when most operas were new, the art and the chandeliers in the opera houses were new, too. I like to immerse the audience in the world of the opera being played. One way of doing that is by inviting artists to do installations in or around the theater. When I did Bluebeard’s Castle at Opera Omaha we had three hundred twenty doors on stage as well as a very large orchestra. The castle wrapped around the orchestra so that it appeared to be inside the building.

Opera Omaha General Director Roger Weitz brings his audience many new ways to look at opera, including new singers and new directors. Happily, he has an audience that accepts new ideas. Of course, he also stages wonderful traditional performances. Most importantly, his audience trusts him to bring them quality shows. The relationship a company has with its audience really helps the art form grow. I should also point out that the kind of brand building based on the artistic product and achievements such as producer Beth Morrison’s successes in New York, Los Angeles, and elsewhere, brings engaged audiences to the theater.