If Puccini’s aim was — in keeping with verismo ideology — to
portray the grim reality of contemporary life then the story of Cio-Cio-San’s
exploitation, abandonment and self-sacrifice must have seemed a fitting tale.
John Luther Long’s eponymous short story — which since its 1904 publication
has spawned many a Butterfly-derivation — was based on a real-life
incident: here, then, was the opportunity for the composer to depict the
catastrophic actualities of cultural and sexual exploitation amid human
suffering, gritty pragmatism and stoic self-sacrifice in back-street Nagasaki.

However, Puccini was evidently more interested in verismo settings
than its aesthetics and philosophies: perhaps the only ‘genuine’
verismo operas are Il Tabarro and Tosca, for even in
La BohËme the emphasis is more on the captivating bohemian milieu
than the sordid quotidian affairs of the common man and woman. The garrets of
the nineteenth-century Quartier Latin may have posed as present-day
normality but in fact they were just as remote and picturesque as the faraway
harbour-shores of Nagasaki. 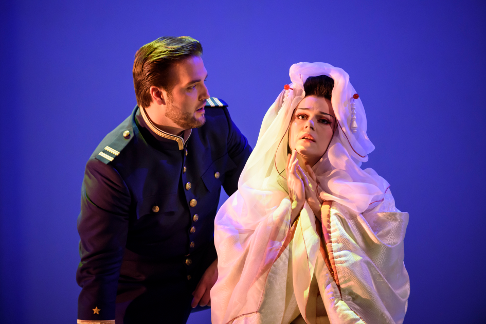 Thus, Madame Butterfly is less an exposure of racial, financial and
sexual abuse than a tale of love, sacrifice and redemption — and one not so
far from the ideals of German Romanticism. Puccini may have called Madame
Butterfly a ‘tragedia giapponese’ but it is not Japanese in any
naturalistic sense: indeed the French term Japonisme might be nearer
to the mark, referring as it does to the mania for the East which followed the
end of Japanese isolation from the West in 1854. In the pavilions of the world
fairs held in Paris during the late-nineteenth century, the Occident discovered
the Orient through displays of the latter’s art, plays and music — and it
devoured what it saw.

This infatuation is thrillingly reflected in Christian Fenouillat’s subtle
but penetrating set designs and the wildly glowing colours of Christophe
Forey’s lighting scheme: Puccini’s orientalism is exotic mystery rather
than naturalistic misery. So, Fenouillat presents us with a room
whoseshoji screens decorously rise and slide to reveal glimpses of
Nagasaki — a pale view of the hills — or an ornamental sh?y?,
the blue-pink mist which hazily bathes the ornamental garden making a
fairy-tale of Butterfly’s entrance. These screens allow rays of yellow-green
or orange light to slide across the set floor, emphasising the unfamiliar
perspective of the world we view. It will not reveal all its secrets or admit
interlopers: Kate Pinkerton appears first as a silhouette, ominous and alien,
through the dividing screen. And, the flat backgrounds cut off figures and
sakura trees at the edge of the frame; this is an asymmetrical world
of juxtaposed angles, layers and colours. Japanese cherry blossom trees are
traditionally associated with clouds, because of their weightless flowery mass,
and when the ephemeral petals tumble to the floor at the end of Act 3,
illumined by a ghostly moon-glow, the death of Butterfly’s airy dreams is
painfully apparent.

All this beauty and symbolism might be mere superficial satisfaction for
one’s sensibilities, if it were not for the dramatic insight and vocal
distinction of Latvian soprano Kristine Opolais who truly appreciates, and
communicates, that Butterfly’s tragedy is a personal one not a cultural one.
Opolais may not convince as an ingÈnue or a teenage Geisha: she is too tall
and her voice too sophisticated and knowingly mature to encapsulate the girlish
immaturities of a giggling fifteen-year-old. But, her Butterfly is a ‘real’
woman of disturbing integrity and resolution, and this steely determination is
gradually revealed by Opolais to be an unwavering willpower and honesty which
will eventually destroy both herself and Pinkerton. 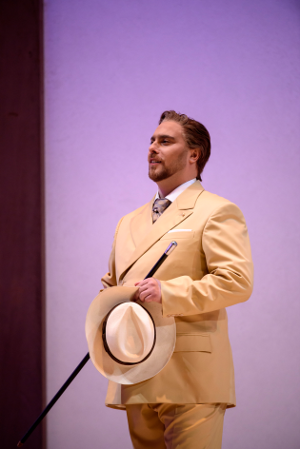 Opolais’s spinto glistens like gossamer thread but has an
underlying strength; she sang with such seductive lyricism that, for once, one
might empathise with Pinkerton’s infatuation. Her voice is not huge, though,
and there were some places where it was overshadowed by the orchestral fabric;
but, in the end-of-Act 1 love duet Opolais used a powerful chest voice to
convey the shockingly deep passion which lays beneath her docile purity and the
demure civilities of her culture.

In Act 2 she laid bare Butterfly’s emotional unpredictability: her haughty
sulkiness when admonished or guided by Suzuki; her youthful excitability which
irrepressibly bursts out, interrupting Sharpless’s reading of Pinkerton’s
letter; her fiery anger when the US consul dares to suggest that she may never
see Pinkerton again. In a pre-production interview in the Daily
Telegraph Opolais said of the role: ‘Just to sing it with a good voice
is not enough, it asks tears from your soul. I am very emotional on stage and
the music is so tender that I suffer for real when I am singing it.’ This was
nowhere more evident than in ‘Un bel dÏ’ where the wistful honesty of her
singing totally explicitly and uncompromisingly revealed her despair.

Leiser and Caurier manage to keep their production on the right side of
sentimentality, but here it was Opolais who imbued it with true tragic
authority. It was a pity then that her final death throes were exaggerated and
unconvincing: Butterfly’s destiny has been foreshadowed, for example in her
prostrate figure at the close of Act 1, and once the ornate tant? has
done its fatal work, one might have hoped for a less melodramatic physical
collapse to convey Butterfly’s ultimately destructive passivity.

Opolais is well-partnered by Brian Jagde’s Pinkerton. The American
tenor’s interpretation of the Yankee Lieutenant as an insensitive young buck
whose crime is carelessness rather than malice is convincing, even if it
doesn’t allow for much emotional range. Jadge’s tenor is bright and
powerful, and although there were a few over-reaching rasps in Act 1, his aria,
‘Addio fiorito asil’, was deeply moving, full of shame and sorrow.

The rest of the cast were solid but somewhat overshadowed by Opolais’s
intensity. Albanian mezzo-soprano Enkelejda Shkosa was a feisty Suzuki, strong
and rich of voice, and Jeremy White’s white-faced Bonze cursed chillingly.
Gabriele Viviani made a fairly bland impact as Sharpless, but Carlo Bosi’s
Goro was wily and snakily persistent and the Italian tenor grabbed his dramatic
moments.

The single performer who matched Opolais’s fearless commitment was
conductor Nicola Luisottiwho drew incredible incisive playing from the
pit, alternating searing, fervent climaxes — the instrumental introduction
did not waste any time in setting out Luisotti’s intentions — with moments
of pristine tenderness. Together with Opolais, Luisotti conveyed an essential
truth: that Butterfly’s tragedy is not caused by external forces of pillage
and corruption but derives from within, from her own misplaced love.