Sometimes you’ve got to get away to find a bit of sun, with good opera a bonus.
It was a brilliantly lighted afternoon making our way through Trafalgar Square on our way to the London Coliseum for the 3 PM curtain of Die Meistersinger, the winter hit of the ENO season. The production by British metteur en scËne Richard Jones earned very positive review here on Opera Today, please see The Mastersingers of Nurenberg, as well as in the British press.
Of course it was no longer Die Meistersinger as it had been transformed into The Mastersingers of Nurenburg, and of course metteur en scËne Richard Jones transformed Wagner’s noble, some may think pretentious tale of the glory of German art into a definitely unpretentious little story of cruelty to a silly old man (like in real comedy), though it was uncertain if the silly old man was Beckmesser — it might have been Hans Sachs). Like in real comedies true love prevailed, and that was enough to motivate Wagner’s mighty climax (abridged version) with just a tiny wink at German art — flash card faces at the very last moment (there had been a couple of hundred photos/drawings of German artists copied onto on the show curtain of which Jacques Offenbach was in bullseye position).
Like his staging of Ariodante in Aix last summer where the king of Scotland had become a mid-western American farmer, Mr. Jones miniaturized, indeed trivialized Meistersinger, here into a storybook tale. American designer Paul Steinberg created an almost children’s book setting. It was a mostly two dimensional scenic world of wallpaper-like repeating patterns in backdrops, the repetitive shapes echoed as well as in furniture and hand props. The second (riot) act was the intersection of two flat faced streets like classical Roman comedy, and the last scene (the competition) construed most of what we had already seen (props and drops) into grandiose, decidedly mock columns of imperial architecture.
The first scene (with the quintet) of the third act was, of course, the most rewarding. No longer the graphically flat public world of printed books it was the private world of Hans Sach exposed in the cluttered, not-for-public-view realism of a life that is not art, a flesh and blood life discovered in the midst of the artifice of witty and sophisticated design. In fact the quintet itself, surely meant by Wagner to be one of humankind’s greatest moments, stepped outside all scenic context, the singers lined across the stage in brilliant white light. Nothing else. 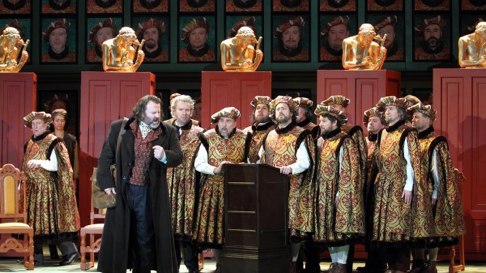 Gwyn Hughes Jones as Walther and the Mastersingers.
The use of the English language at ENO is very practiced, the diction nothing less than miraculous. The preciousness of the diction added a storybook, even infantile musicality that contributed greatly to Richard Jones’ fairytale, indeed satiric vision of what Mr. Jones, and we too might even perceive as Wagnerian bombast. It was this satire that brought honesty and perspective to this magnificent opera for us English speakers. Though maybe, finally, some of us missed the subtlety and gravity of the deeper reaches of Wagnerian thinking.
Back at Trafalgar Square a couple of days later the floating clouds of an ideal English skyscape prevailed during the day though heavy rains were predicted for the evening. The Peter Sellars production did rain heavy changes on Purcell’s 1695 “Dramatik Opera,” The Indian Queen. Its original “Heroik Verse” by John Dryden washed away by Mr. Sellars’ Heroik Platitudes of Social Responsibility when not drowned in Down-With-White-European-Males syndrome.
The Indian Queen has not yet been reviewed on Opera Today.
There are those few of us who remember the 1998 Long Beach (CA) Opera production of The Indian Queen by Mexican performance artist Guillermo GÙmez-PeÒa, the Dryden verse adapted to contemporary Chicano actors embodying the stereotypes that north-of-the-[Mexican]-border observers (cultural tourism) have imposed on south-of-the-border. However in the Peter Sellars production Dryden has been exiled from the Purcell intention.
Purcell’s piece does indeed cry out for racial and ethnic exoticism. In the Sellars production a Chicano actress from California narrated the ugly deeds of Dryden’s Aztecs whom Sellars had transformed into Spanish conquistadors, manufacturing the evils they could have perpetrated on women and children. Note that this production has already been at Madrid’s Teatro Real where it certainly belongs — may the Spaniards expiate the sins of their past. It was a naive art, fish-out-of-water in London’s sophisticated theatrical world.
Peter Sellars has a fabulous, original theatrical mind and he is a great stage director. It was an evening of highest level theater, brilliantly conceived and realized starting with four dancers who were tirelessly choreographed into exotically titled dance sequences that added Mayan mysteries to Dryden’s already absurd geography. Purcell’s added Symphony, its parts titled Adagio, Allegro, etc., assumed names like “Dance of the Solar Fire Deities.” Note that a dramatik opera was like a French masque with recited words, instrumental music, airs and choruses, dances and of course spectacle.
Spectacle was created by Gronk [sic], the single named, Chicano artist/performance artist/etc who lives in downtown Los Angeles. He created paintings in the brilliant colors of exotic birds, industriously magnified into giant full stage drops or into large panels that could do all sorts of things like configure themselves into a Mayan temple from time to time. Sellars slickly incorporated this naive scenic art into the cult of talented, downtrodden but proud personalities that define his muse.
Cherry-atop-the-cake there was a signer [!] who stood in the baignoire next to the stage and signed the entire performance. You were not sure if this was for a disoriented deaf person who may have found himself in the Coliseum that evening, or to insist that the opposite of sound, excoriating evil in this case, is silence that simply ignores evil. Or what? It is a rich if silly image indeed. As well, both halves of the program culminated in silence, a quiet that endured naturally and decayed gradually. A coup de thÈ‚tre indeed before the delayed applause was heard. There were no individual bows taken beyond that of the conductor.
There are many of us who will argue that the ENO is the world’s finest opera company. Here the assembled cast was excellent (for the most part), polished singers of appropriate skin colors to sing the newly created words (Dryden was not at all in the picture). Well, except the conquistador replacing Dryden’s Montezuma who was a black man. The orchestra boasted three theorbos, both a harpsichord and an portable organ in the sizable continuo, and a large number of modern and early music instruments for the larger orchestral pieces.
Most impressive of all was the ENO chorus, meticulously rehearsed into seemingly infinite colors and textures and volumes, the anti-war chorus that finalized the first act was positively shouted. The chorus had rushed onto the stage apron to confront us culpable white European males innocently sitting in the Coliseum auditorium.
The gentleman walking out of the auditorium ahead of me confessed to his friend that he had become hostile. So had I.
Michael Milenski

image=http://www.operatoday.com/Queen_ENO1.png
product=yes
product_title=Die Meistersinger and The Indian Queen at the English National Opera
product_by=A review by Michael Milenski
product_id=Above: Lucy Crowe as DoÒa Isabel, Julia Bullock as The Indian Queen [All photos from the ENO]