The recent, misguided Pierre Audi production at the OpÈra de Paris is an example. Despite its slick “look” it was no more than the emperor in new clothes. But maybe you made your way to Marseille last week where the new production (sets/costumes/stage direction) by Louis DÈsirÈ restored your faith in revisionist productions. And in Tosca.
It was not a cast of singers in Marseille that limited its sights to the verismo thrills perpetrated by larger than life opera singers and effect mongering conductors. It was a cast that immersed itself in a revision of Tosca. No longer a mere showpiece for powerful singers of powerful personality the opera had become true theater where every word was eloquent and every gesture carved — a revisionist Tosca if there ever was one.
Director DÈsirÈ imagined Puccini’s “shabby little shocker” in a shadowy atmosphere that bespoke the prevailing dangerous political climate in which corrupt power, jealousy and unfettered lust exploded into lurid happenings. The production was in fact a study in chiaroscuro — fields of darkness with shafts of yellow light at the precise moments when emotions flared.
Lighting the singers will have been a monumental task, not only for the very accomplished lighting designer Patrick MÈe¸s, but also for the actors to learn where and when to move into and out of the shafts of light (note that Mr. MÈe¸s primarily designs lighting for dance where directional lighting techniques are highly developed).
Marseille born Louis DÈsirÈ maybe began his career as a costume designer or maybe as a set designer (the program bio is unclear). As both he is known to American audiences as a collaborator of American director Francesco Negrin (Werther in San Francisco and Rinaldo in Chicago). 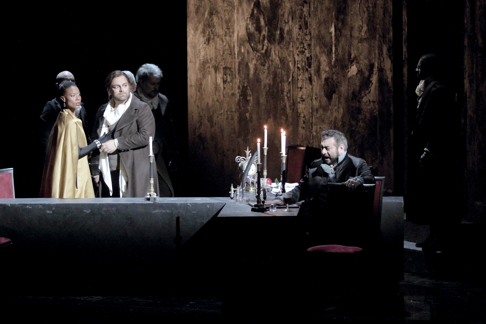 Adina Aaron as Tosca, Giorgio Berrugi as Cavaradossi, Carlos Almaguer as Scarpia
As the sole metteur en scËne of this Tosca he created stage pictures that are the highly charged personal moments of Mannerist painting — to be clear, it is the moment he captures, not the action. In fact his staging is two dimensional tableaux, occurring with few exceptions within the proscenium frame. He uses clever techniques to reduce this larger frame — for example Scarpia’s Act II table is a long black quadrangle box extending across half the stage, when actors move behind it there lower bodies are hidden, thus a sort close-up is effected.
The large proscenium frame of course was completely filled for the Scarpia “Te Deum.” There was no procession, only Scarpia standing downstage center holding one of the roses Tosca had placed on the altar to the Virgin Mary. Behind him in two straight, across the stage lines were 48 black cossack covered OpÈra de Marseille choristers whose arms rose in celestial rapture to Scarpia’s sexual raptures. It was good, very, very good. 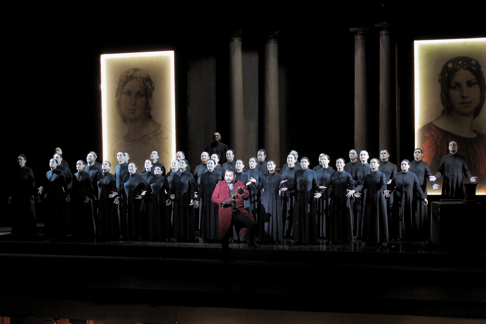 Scarpia’s apartment boasted a small balcony on the side where Tosca escaped to sing her “Vissi d’arte” in a shaft of light, her lower body hidden by the railing. These tableau moments told the sordid tale from beginning to end in a seemingly inexhaustible catalogue of Mannerist inspired poses, epitomized by the execution — Cavaradossi was alone downstage center, the revolving stage had removed the shooters from the frame, Tosca was hidden behind a wall).
American soprano Adina Aaron, dressed the entire opera in an unadorned straight line gold gown (like a shaft of light), created an exotic presence for the actress Floria Tosca, her dark hued voice producing a lovely, burnished spinto tone, her less-than-full-throated high climaxes absorbed into the musicality of her character. She closed Act II sitting alone down stage center, flanked by two candles to speak Tosca’s “davanti lui tutta Roma tremava.” Delivered with resigned irony the tableau was simply an ironic statement of the line we had been waiting for.
Italian tenor Giorgio Berrugi sang Cavaradossi with exquisite musicality, all famous Italian tenor mannerisms firmly present but impeccably integrated musically. His ease of vocal production in this spinto role made his character about musical line, integrating his music into Puccini’s high octane drama in a flow that supported Mr. DÈsirÈ’s flow of tableaux. Of very great pleasure was the dramatic and musical authenticity of his rolled “r”‘s, creating unexpected ornamentation.
Mexican baritone Carlos Almaguer roared with unfettered gusto, as must every Scarpia. In this staging he is not asked to be emotionally complex but simply to reign as the perpetrator of the darkness of Napoleonic political atmospheres. Here he did not complicate his basically gruff delivery with nuance, nor did he attempt to assume an out-sized presence. He underscored director DÈsirÈ’s Tosca as a straight forward, uncomplicated recounting of the facts of the story. That he waited until the final curtain calls to take his bow assured the dramatic integrity of the production.
Of note as well was the excellent Angelotti of French bass Antoine Garcin, for once a consul of the fallen Italian republic who showed requisite age and stature.
Italian conductor Fabrizio Maria Carminati sacrificed the showy, obvious effects of this warhorse opera to the far more subtle demands of the production. It is the mark of a real opera conductor to integrate the score into the production. We can be very grateful to Mo. Carminati for the unobtrusive and very able contribution of the pit.
As metteur en scËne Mr. DÈsirÈ both designs and stages Carmen for the ChorÈgies d’Orange this summer, with lighting by Patrick MÈe¸s. Not to be missed (cherries-atop-the-cake: Kate Aldridge as Carmen, Jonas Kaufmann as Jose).
Michael Milenski

Photos by Christian Dresse courtesy of the OpÈra de Marseille