This recital of French mÈlodies
with accompanist Roger Vignoles — which comprised some material from
this recording alongside other Gallic chansons — was certainly
sensuous and heady, but the soft languor of FaurÈ, Lekeu and Hahn was balanced
by the wit of Charles Koechlin and the poignancy of Duparc. 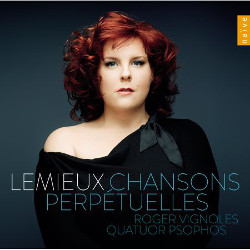 The gratifying lyricism of FaurÈ’s Cinq melodies ‘de Venise’
made an engaging opening, and allowed Lemieux to demonstrate her secure
technique, the extraordinary range of her tonal palette and the wide compass of
her voice, which she can extend down to a full contralto and up to blooming
mezzo heights, passing through the registers smoothly and evenly. A native of
QuÈbec, Lemieux’s diction was, unsurprisingly, idiomatic. But, FaurÈ’s
settings often prioritise the musical line above the prosody, resulting in
occasional misplaced accents and emphasis, and Lemieux was skilful in
highlighting textual details and drawing the listener into the song.

Thus, in ‘Mandoline’ the curving melisma with which the composer
characterises the serenaders’ ‘tender’ songs was beautifully shaped. And,
describing the fair listeners with ‘Leurs longue robes ‡ queues,/ Leur
ÈlÈgance, leur joie/ Et leurs molles ombres bleues’ (their long trailing
gowns, their elegance, their joy, and their soft blue shadows), the contralto
adopted a breathy conspiratorial tone which contrasted with the bright
playfulness of the opening portrait of the lovers exchanging ‘sweet
nothings’. This teasing mood had been established by Roger Vignoles’
chirpy, staccato introductory bars and Vignoles’ accompaniments were
supportive and attentive throughout, adding splashes of colour and interest —
such as the running semi-quavers which ‘shiver’ like the breeze in
‘Mandoline’.

‘En sourdine’ (Muted) was more dreamy, Vignoles’ wave-like arpeggios
and Lemieux’s dark tone conjuring the hazy headiness of the calm twilight.
Lemieux’s superb control of dynamic extremes was demonstrated at the end of
the song, her voice ringing passionately yet forebodingly as evening fell, but
fading into sweet softness for the closing consolation, ‘Le rossignol
chantera’ (the nightingale will sing). There were flashes of vocal power in
‘Green’, too, judiciously enriching the musical line, and particularly
impressive was the way Vignoles used the semi-quaver movement in the inner
voices both to colour the piano’s repeating quavers and engage with the
voice.

A similar sense of unity was achieved at the opening of ‘C’est
l’extase’ (It is rapture), the piano’s rising motif sparkling deliciously
to conclude the singer’s slow opening line, ‘C’est l’extase
langoureuse’ (It is languorous rapture). In this song, Lemieux moved fluently
from high to low and back again, the voice even and lovely across the
registers. The highlight of the FaurÈ songs was ‘A ClymËne’: the lucid
gentility of the opening captured the mesmerising mystery of Verlaine’s
poetry, the moments of power evoked the intoxicating richness of the
beloved’s ‘rare scent’, while the floating beauty of the final line,
‘Ainsi soit-il!’, supported by Vignoles quiet, upwards-sweeping triplets,
confirmed the lover’s submission to his desire.

Guillaume Lekeu’s settings of his own texts, ‘Trois PoËmes’, reveal
the influence of the composer’s worshipful admiration for his teacher, CÈsar
Franck. The sobriety of ‘Sur une tombe’ (On a tomb) was established by the
quiet melancholy of the piano’s opening phrase and the gravity was sustained
by the composure and precision — rhythmic, dynamic — of the expressive
vocal line. The clouds and shadows were lifted by the clear textures of
Vignoles’ insouciant introduction to ‘Ronde’ (The dance), and in this
song Lemieux demonstrated the easy flexibility of her voice, most especially in
the declamatory second stanza with its temporal ebbs, flows and elongations
which mimic ‘Les murmures d’amour de ce beau soir d’ÈtÈ’ (love
murmuring on this beautiful summer evening). At times she employed a full
vibrato to intensify a note or phrase, most effectively in the final stanza,
the voice shimmering glossily through the translucent moonlight painted by
Vignoles high, crystalline line. In ‘Nocturne’ Lemieux’s vocal line
unfolded sweetly and mellifluously above the piano’s busy accompaniment.

The suspended, rocking chords which open ‘Offrande’ (Offering) by
Reynaldo Hahn transported us to a world far removed from FaurÈ’s
‘Green’, which sets the same Verlaine text — and reminded us of the
predilection for the exotic and oriental in late-nineteenth-century France.
Lemieux’s melody was wonderfully focused and well-shaped, particularly in the
final stanza, ‘Sur votre jeune sein laissez rouler ma tÍte’ (On your young
breast let me cradle my head); and the delicacy of Vignoles’ placing of the
oscillating chords, and of the low bass G which finally intimates resolution,
was incredibly moving. ‘L’heure exquise’ (Exquisite hour) sparkled
tremulously, with Lemieux once again injecting a dash of the moon’s precious
gleam. ‘FÍtes galantes’ offered another opportunity to compare Hahn’s
approach to text setting with that of FaurÈ in ‘Mandoline’. Here, the
piano’s rippling chords and high right-hand circling motif created a sense of
the serenaders’ festive excitement, and this was enhanced by Lemieux’s
elegant execution of the extravagant, ornamented leaps which depict the
listeners’ luxurious attire.

The tranquillity of the opening of ‘D’une prison’ (From a prison) —
written by Verlaine when he was imprisoned in Brussels after his attack on his
lover Arthur Rimbaud in 1873 — created deep pathos, Vignoles’ dark bass
line and superb pedalling creating momentum and direction. The poet-speaker’s
rhetorical cry ,‘Mon Dieu, mon Dieu, la vie est l‡’ (My God, my God, life
is there), was penetrating but still restrained and controlled, falling to a
low monotonal murmur reflecting the peace of the world outside the prison
walls. The piano’s eloquent rising flourish initiated the self-reflections
and recriminations of the final verse. This was indeed a probing and insightful
interpretation by the performers.

If we returned after the interval expecting more of the same — one danger
of such a programme might be a lack of variety — five songs by Charles
Koechlin quickly rectified any potential misconception. In ‘Menuet’
Vignoles’ understated pastiche dance seemed indifferent to the singer’s
lamentations, until the final verse when Lemieux joined with the piano to
dramatically exclaim her distress, ‘Ah! Comme vous broyez les coeurs’ (Ah!
How you break hearts). The piano’s quiet ripples at the start of ‘Si tu le
veux’ (If you so desire) created a propelling animation. And, Lemieux
balanced tenderness and passion, conveying both the purity and sensuality of
the poet-speaker’s desire, most seductively in the port de voix —
a sweeping octave fall — which joins the image of the beloved, dishevelled by
the wind, to the final line: ‘Si tu le veux, Ù mon amour.’

Three songs from Sept Rondels Op.8 completed the Koechlin sequence.
‘La pÍche’ (Fishing) moved persuasively between lightly articulated
episodes, conveying the fisherman’s joy in his work, and surprisingly
statuesque passages, with deliberately placed accents, which conjured both
broad vistas and the abundant weight of the fisherman’s catch. The
asymmetries of ‘La lune’ perfectly embodied the capriciousness of the moon
with her frivolous ways. The piano’s trembling glissandi blew like a cold,
dry gust of wintery air through ‘L’Hiver’, the monotone recitation and
bare fifths in the left hand conveying the unalleviated uniformity of the
snow-covered Bois de Boulogne.

It was a delight to hear these seldom performed songs by Hahn, Lekeu and
Koechlin, but there was familiar fare on offer too, and Debussy’s FÍtes
galantes Book II followed. Lemieux made much of the text in ‘Les
ingÈnus’, her low voice silky and enticing. The gradual deceleration was
well controlled and the fading of the evening light in the third stanza was
enigmatic and magical; Vignoles’ delicate grace notes and ebbing augmented
triads lent an air of strangeness to the final image of the lovers whose
startled souls tremble eternally at the remembrance of the pretty girls’
dreamy ‘fair-seeming words’. In ‘La faun’ Lemieux unleashed all the
smoky mystery of her full contralto colour while Vignoles’ distant low
fifths, oscillating rhythmically, conjured the mercurial faun’s laughter and
twirling dance. ‘Colloque sentimental’ (Lovers’ dialogue) was profoundly
moving and the performers assailed the interpretive challenges superbly.
Lemieux’s melody was emotive and expressive above the sparse accompaniment,
yet details were never exaggerated and the tone was even and controlled. Her
breath-control and phrasing were excellent, the syllabic setting never
interfering with the flow of the vocal line. Even at the bottom of her range,
the singer’s voice spoke clearly and truly, and the three ‘voices’ in the
text were clearly distinguished.

Four songs by Henri Duparc concluded the recital. In ‘Invitation au
voyage’ there was a captivating, sudden change at the moment when the lover
imagines the destined place, ‘L‡, tout n’est qu’ordre et beautÈ,/ Luxe,
calme et voluptÈ’ (There — nothing but order and beauty dwell, abundance,
calm and delight), as the piano’s rapid semiquavers gave way to quiet,
expansive chords, shimmering like a mirage, the simplicity of the vocal line
evoking wonder and hope. The syncopated fluidity of the piano’s right hand
line in ‘SÈrÈnade florentine’ suggested the inscrutability of the night
sky, giving way to increasing definition in the closing passages as the star
assumes metaphoric presence, alighting on the sleeping beloved like a kiss, a
white treasure which embodies their love. ‘PhidylÈ’ pulsed with controlled
passion, the slow steady crotchets of the accompaniment evolving into triplets,
then semiquavers, ever more invigorated as the performers created a compelling
urgency. Most spell-binding of all was ‘La vie antÈrieure’ (A previous
life). Lemieux’s tone was truly stunning in the solemn opening stanza, as
Baudelaire’s poet-speaker describes his former life beneath vast colonnades
that look in the evening light, like ‘grottes basaltiques’ (basalt caves).
The poetic images were wonderfully captured in sound: hypnotic swaying
cross-rhythms, driving forward, revealed ‘Les houles, en roulant les images
de cieux’ (The sea-swells, mingling with the mirrored skies); grandiose and
impassioned pounding quavers depicted ‘des esclave nus, tout imprÈgnÈs
d’odeurs’ (naked slaves all drenched in perfume).

Reading these Parnassian poets, one might be tempted to concur with
FaurÈ’s view that ‘their form, so elegant, pretty, and sonorous, resides
entirely in the word — and because the word does not hide a single true
thought … [the] verse is too full, too rich, too complete for music to be
effectively adapted to it’. But, Lemieux and Vignoles made these settings
endlessly fascinating and absorbing.