While in Paris working on the French versions of his other operas, Gaetano Donizetti took some time to write an opÈra-comique, La Fille du RÈgiment (The Daughter of the Regiment). Its French text is by Jean-FranÁois Bayard, a nephew of the famous librettist EugËne Scribe, and the prolific but rather old fashioned Jules-Henri Vernoy de Saint-Georges.
After its premiere at the OpÈra-Comique on February 11, 1840, Marie-Julie Halligner, who sang the Marquise of Berkenfeld, said that the performance was “a barely averted disaster” because the tenor was frequently off pitch. French critic and composer Hector Berlioz claimed that the new work could not be taken seriously, but in all probability his opinion was colored by jealousy. During a single year, Donizetti had two works performed at the OpÈra, two at the ThÈ‚tre de la Renaissance, two at the OpÈra-Comique, and one at the ThÈ‚tre-Italien.
La Fille du RÈgiment soon became popular at the OpÈra-Comique and it achieved its thousandth performance within seventy years. One of the reasons for its success was the aria that defeated the premiere’s tenor, MÈcËne MariÈ de l’Isle. “Ah! Mes amis, quel jour de fÍte!” (“Ah, my friends, what an exciting day”), is best known for containing nine high Cs. 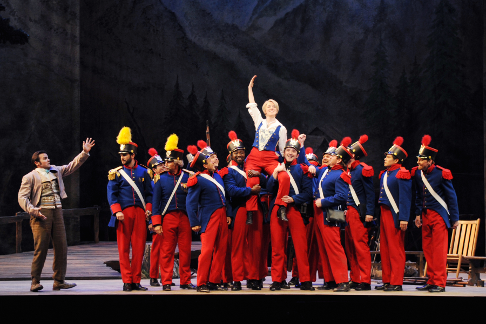 David Portillo as Tonio, Susannah Biller as Marie with Regiment including Stefano De Peppo as Sergeant Sulpice
On March 7, 1843, the first American performance of Fille took place at the ThÈ‚tre d’OrlÈans in New Orleans. It was so successful there that the company brought the opera to New York City where it was highly praised by local newspapers. As time went on, artists such as Jenny Lind, Henriette Sontag, Adelina Patti, Lily Pons, and Joan Sutherland enjoyed singing the role of Marie.
On April 10, 2015, Arizona Opera finished its season with La Fille du RÈgiment at Phoenix Symphony Hall. A passionate Marie, Susannah Biller was a veritable energizer bunny onstage. Her voice is bright and flexible with a good bloom on top and a tiny bit of steel in it. Having created an exciting character, she sang with agility as well as passion.
Tenor David Portillo, who has a beautiful lyric sound, had no difficulty reaching the nine high Cs in the famous aria. As lively and buoyant as Biller, bass Stefano de Peppo was a nimble, hilariously funny Sergeant Sulpice who sang with a colorful, robust voice. Donizetti did not often write major roles for lower women’s voices but the comedic Marquise of Berkenfeld is an exception. Mezzo Margaret Gawrysiak played her part broadly and showed her true vocal ability in her aria, “Pour une Femme de mon Nom” (“For a Woman with my Name”).
Arizona Opera Young Artist Program member Calvin Griffin has become a valuable member of the company. A lithe and limber comedian, he made an attentive Hortensius. Chris Carr was an amusing corporal while actress Didi Conn was an entertaining Duchess of Krakenthorpe. Like many other operas of this era, Fille has a great deal of choral music. Henri Venanzi’s singers conveyed in idiomatic French style and grace.
Right from the opening notes of the overture, the audience knew that conductor Keitaro Harada was putting his individual stamp on this piece. He combined Donizetti’s delightful melodies with dramatic musical coherence. His dynamic range was huge and he kept the playing transparent so that listeners heard all the melodic strands in the fabric of the score. This was one of the best shows of the year at Arizona Opera and it leaves us waiting with bated breath for next season. Personally, I can’t wait for Emmerich K·lm·n’s operetta, Arizona Lady, a piece that has never before been seen in Arizona.
Maria Nockin