Meditative and metaphysical rather than inherently dramatic, the work is perhaps more an oratorio — or orchestral poem with voices — than an ‘opera’; but it references some significant operatic predecessors, from Debussy to Janacek, from Wagner to Britten. One might describe it as Death in Venice meets
Salome: Apollo and Dionysus battle for the eponymous monarch’s heart
and soul, and a wandering zealot stirs a ruler to destabilising self-scrutiny,
while the woman whom the King loves embraces the decadent abandon preached by
her husband’s nemesis. But, there is also a Nietzschean dimension — a chain
stretching from Mann, through Schopenhauer and Wilde, to Wagner, all the way
back to Hamlet.

Director Kasper Holten and his designer, Steffen Aarfing, adopt a shrewd, at
times restrained approach, more cerebral than sybaritic, as they translate 12
th-century, Christian Sicily to the modern age. We begin in absolute
darkness and then, as suggestive fragments emerge from the orchestra, a huge
head is gradually illuminated. Initially, the ochre tints and ashen shadows of
the outsize phrenological model evoke a medieval shroud, but as the light
sharpens (Lighting Design, Jon Clark) a troubled modern mind-set emerges, the
chiselled planes suggestive of introspective agonies. At times the eyes of this
huge emblem of human consciousness seem closed, impenetrable; then transient
shadows transform the concealing lids into infinite, inexhaustible black holes.
Choral voices are heard, intoning archaic Byzantine chants. The supplemented
ROH Chorus were on superb form throughout the evening, and in these opening
bars the dark pulsations of the bass lines wonderfully conjured the
spirituality of Eastern European Orthodox Church. 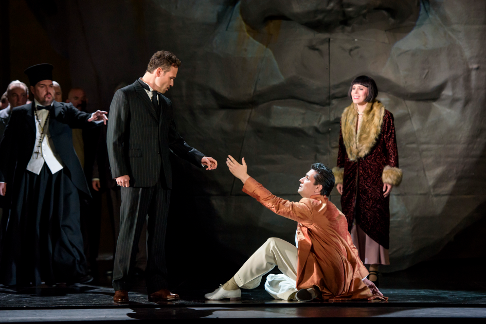 Whose head do we see? God’s? KrÛl Roger’s? The King, whose arrival
heralds a shift to more anarchic harmonic worlds, appears to bow in worship
before the monstrous cranium, exposed in the centre of a curving Coliseum; all
eyes are upon him.

KrÛl Roger is, like Aschenbach, a man for whom Classical order has
outweighed Romantic indulgence; just as Mann’s protagonist has practised a
perfectionist fastidiousness, paralysed by scruples and distaste, so the
Sicilian King has governed his country with meticulous propriety: a patron of
intellectual and scientific advancement, the guardian of social order and
religious certainty. As his chief councillor and counsellor Edrisi — an
Arabian sage — advises, it is many a year since the King’s lips have sought
the sensuous embrace of his Queen, Roxana. But, subversive strains linger
beneath the ceremonious inscrutability, and the appearance of a ‘Shepherd’
— dressed here, in contrast to the sombre greys of the King and his citizens,
in a sensuous white and orange silks — initiates an internal battle within
the King’s heart and mind between the gods of restraint and excess.

Frequently — as is the case with Britten’s operas — Szymanowksi’s
KrÛl Roger has been interpreted as autobiographical. And there is
surely no doubt that the composer’s own homosexuality informs his depiction
of the attraction which the monarch feels towards the enigmatic mystic who
destabilises his kingdom and his soul. But, the conflict is played out in a
sociological context too; for initially the community condemn the Shepherd as a
heretic. Holten masses the dully attired community first to the left, then
right, of the stage, and their urgent interjections admonishing their King to
punish the interloper are reminiscent of the unsympathetic blood-cries of the
Borough posse which pursues another outsider to his death.

In Act 2 the colossal head swivels so that we can see its clinical entrails:
now we are inside the monarch’s own mind, and understand that the opera is a
drama of interiority. The split levels and spiralling staircases suggest the
cold control of intellectual imperatives, but there is also a red velvet
curtain draped across a life-shaft which descends to Hadean realms: an
Underworld of repressed desires. Aarfing’s construction has the practical
advantage of raising the soloists above the orchestral maelstrom; but, its
divisions and layers also convey the stillness and tension as KrÛl Roger
awaits the arrival of Shepherd in his inner sanctum.

In a basement Hades, male dancers in nude body-suits and black masks stretch
and arc; we have traded the metaphysical mannequins of Giorgio di Chirico for
the fantastical fetishism of Hieronymus Bosch. As KrÛl Roger descends the
coiling stairway which leads to these nether-regions, the paper lantern which,
like a pendant moon, evoking an objective cosmos, had illuminated Roger’s
inner world, is disturbingly transmuted into a penetrating eye-ball which fixes
its unflinching gaze on the protagonist.

One might argue that the whole opera is a slow-motion re-enactment of
Aschenbach’s Bacchanalian dream. Holten shows us that the surrender to
chaotic, Dionysian impulses is not without danger; for Roger is violently
assaulted — the Shepherd is a dark aspect of his own psyche for which the
King is callously punished.

The final Act begins with a video projection (Video Designs, Luke Halls) of
the prophetic head, which disintegrates and slumps into a funeral pyre: the
message is clear — to follow the Shepherd is to embrace death. And, into the
flames, the Chorus throw the limp piles of books and papers which litter the
Coliseum. Initially Szymanowski and his co-librettist Jaros?aw Iwaszkiewicz
had devised a finale of Schopenhauerian renunciation: King Roger was to have
embraced the Shepherd’s ideology but Szymanowski himself revised the work to
have the King remain alone, accepting the veracity of the Shepherd’s words
while resisting their seductive and suicidal lure.

Holten gives us a blinding flash of light, as KrÛl Roger heralds a new sun
and a new dawn: he acknowledges the Shepherd’s truths but retains his
independent integrity. Silhouetted against the apocalyptic blast, Roger has
sufficient strength to withstand the dissolution of Wildean aestheticism and
decadence.

Much depends on the musical and dramatic impact of the protagonist and
Polish baritone Mariusz Kwiecie? is an experienced exponent of this role,
having previously embodied the troubled King in productions in Sante Fe, Paris
and Madrid. Kwiecie?’s appealing baritone was glorious and captivating.
Holten informed us before Act 3 that the singer was suffering from a cold and
was tiring, but would continue; perhaps one could detect a slight waning of
brightness in Act 2 and towards the close of Act 3, but there was really
nothing to make one feel short-changed. Kwiecie?’s dramatic commitment was
unwavering, and any sense of vocal strain perfectly reflected the psychological
anguish of the King. Disrobed, distressed and vulnerable, in the final Act
Kwiecie? revealed all of KrÛl Roger’s dualities and divisions.

As his Queen, American soprano Georgia Jarman’s free, joyful outpourings
floated lyrically around the auditorium, like a rapturous reverie. She employed
a judicious vibrato and was able to embody both a sensuous and maternal
personae, reminiscent of Jana?Èk’s Emilia Marty/Elina Makropoulos.

If Pirgu’s Shepherd was the embodiment of androgynous hedonism, then Kim
Begley’s Edrisi was the quintessence of conscious rationalism. The British
tenor made a strong dramatic impact, as did Alan Ewing (Archbishop) and Agnes
Zwierko (Deaconess).

This production was the first meeting of minds of the ROH’s Director of
Opera, Kasper Holten, and Music Director Antonio Pappano; if Holten’s
approach was at times elliptical, then Pappano was impassioned and mesmerising
in the pit. But, I wondered about his decision to conduct without a baton:
there was much energised surging and broad sweeping gesturing — which did not
preclude precision in encouraging wonderful solos from horns, clarinet, oboes
and others; but in an opera that can seem like slow-motion PellÈas et
MÈlisande — the orientalist harmonies and modes also recall Debussy —
perhaps a crisper pulse may at times be required to complement the sensuous
swells and coloristic etchings.

Overall, though, the musical and dramatic values of this production are
convincing and rewarding. It is a pity that there are only five more
performances in this run: catch one if you can.