Moscow-born soprano Mlada Khudoley who also appeared in the title role
during MO’s 2011 production of Salome re-affirmed her status as an
operatic force of nature. Her dramatic intensity seemed only to grow with each
passing scene, from her first veiled, “teaser” entry where she silently
perches atop sky-high scaffolding, to final duet “Del primo pianto,” in
which she confesses her love to Cal‡f. Her mesmerizing emotional trajectory
where she melts before our eyes from a stony cold princess to deeply wounded
woman hiding behind pride and power proved masterful. Khudoley’s powerhouse
vocals, and especially during Act II’s pivotal scene in which she poses the
three cryptic riddles to Cal‡f enthralled with her every penetrating note. 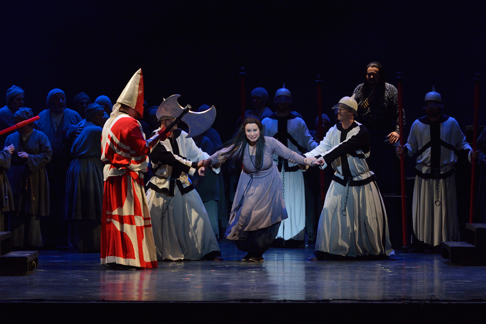 Cuban-born lyric tenor Ra˘l Melo marking his MO debut did not fare as well.
His voice struggled to project at times, albeit did grow increasingly stronger
throughout the show. His iconic Act II aria “Nessun Dorma,” should be a
showstopper. Melo showed some strain in his upper range, with clunky
amplification of the backstage chorus also becoming a distraction. And while
yes, the show did go on, his strong conviction and commitment to this character
nevertheless earned loud cheers from the clearly rapt audience. 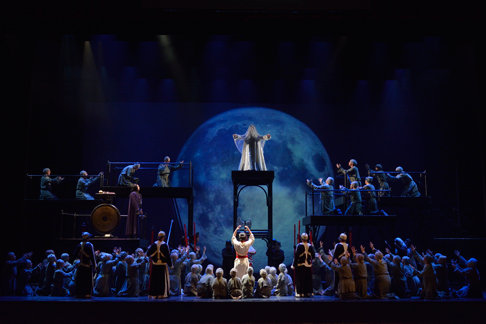 The lavish production including vibrantly colourful sets/costumes from Opera
Carolina created stunning eye candy, including effective video/stills
projections that added further dimensionality and contemporary appeal. The
image of skulls bobbing in blood does not easily leave the imagination — but
neither does the luminous, breathtaking moon or starry night sky that served as
visual canvas for the top of Act II.

Characters positioned on towering scaffolds clearly showed the pecking order
of power. The Emperor Altoum wonderfully sung by Manitoban bass Terence Mierau
— and notably real-life farmer — seated among shards of light at the very
height of the hall added gravitas to the entire production.

Opera at its grandest should ideally move the heart or inspire the soul —
as witnessed during MO’s brilliant season-opener of Fidelio last
November. However, Puccini’s opera remains a conundrum; a fantastical tale
that ends happily ever only after its most innocent characters, Li˘
and her countless suitors including the Prince of Persia (George Nytepchuk)
have become brutally slaughtered.

Still, MO is to be commended for breathing new life into this ice princess
after an absence of 19 years. The opening night audience certainly seemed to
agree, especially melted by Khudoley’s gripping performance, and springing to
its feet at the end with cries of bravo.