But the wonderfully taut plot,
tensions between public duty and private desire, strongly drawn characters and
challenging music can provide a highly satisfying experience, especially as the
leading roles are some of the most challenging and rewarding in the repertoire.
Opera Holland Park has a track record for daring, producing operas which
stretch the limited technical resources of their stage, so it was with great
interest that I went along to the company’s very first production of
Aida, which debuted on 24 June 2015. Daniel Slater directed, with
designs by Robert Innes Hopkins and lighting by Tim Mascall, with Gweneth-Ann
Jeffers as Aida, Peter Auty as Radames, Heather Shipp as Amneris, plus Graeme
Broadbent as Ramfis, Jonathan Veira as Amonasro, Keel Watson as the King and
Emily Blanch as a priestess. Manlio Benzi conducted the City of London
Sinfonia.

Inevitably we could not expect pyramids, camels and large scale theatrical
effects. But Daniel Slater’s production was certainly not without surprises.
The basic set consisted of a museum-like using the Holland Park House faÁade
as backdrop and with statues from Ancient Egypt in a museum display. During the
prelude, the chorus in modern dress (dinner suits and long dresses) exploded
onto the stage and the opening scene was a party. Clearly we were in a modern
Kingdom, albeit one obsessed by the past as Radames was inducted as general by
dressing him in Ancient Egyptian garb, and for much of the second half the
populace were dressed in neo-Ancient Egyptian fancy dress. Aida was a cleaning
lady, busy cleaning up after the party-goers. The production was secularised,
with Ramfis becoming a rather nasty political fixer. But the production had
more surprises for us, when the captured Ethiopians are brought on in a small
huddle they were dressed as service workers – cleaning ladies, janitors etc.
Were they real Ethiopian captives who had been dressed like that to demonstrate
that they were unimportant, or was the war on invading ‘Ethiopians’ really
a border war with illegal immigrants? It was never made clear, but I inclined
to the latter. Whichever, the Egyptians were displayed as rather nasty, selfish
and unsympathetic. 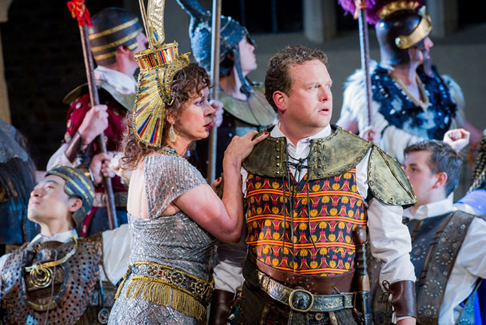 Heather Shipp as Amneris and Peter Auty as Radames

But the removal religion from the plot, and the modernisation of the milieu
also removed an essential element from the plot, the tension between public
duty and private desires. In Daniel Slater’s production I was not clear what
Radames meant when he says he is renouncing his duty to his country, certainly
he seemed to be emptying his wallet? The end result was gripping theatre, but
it wasn’t quite the Aida that Verdi envisaged.

When staging the opera the biggest question is not where to set it, after
all Verdi’s plot works in a whole variety of situations, but what to do with
the triumph scene. Aida came between the grand French version of Don
Carlos and the first Italian version of that opera, Don Carlo. In
Aida, with its combination of intimate scenes, and a conflict between
public duty and private emotional desires in the context of a grand historical
narrative, Verdi would seem to have been interested in re-working the French
grand opera form to suit the Italian stage. This means that the triumph scene
functions very like some of the large scale historical scenes with ballets in
French grand opera. Wherever you set it, it needs large forces to bring it off,
and frankly a lot of the music is not top-notch Verdi. A logical step would
seem to be to cut it, but no-one does. Daniel Slater and movement director
Maxine Braham gave us an orgy like party scene in which the Egyptians seemed to
over indulge in everything in celebration of their ‘triumph’ over the
Ethiopians. It made dramatic sense, and the chorus was clearly having fun, but
the scene went on far too long, yet it was clearly appreciated by most of the
audience.

The production worked because Opera Holland Park had assembled a strong and
balance team of soloists under conductor Manlio Benzi. Whatever you thought of
the ideas behind the production, the musical values were very high indeed and
Daniel Slater had drawn vibrant performances from all concerned.

Aida is rather a passive role, and one of Gweneth Ann Jeffers (many)
strengths was that even before she sang a note she had conveyed much of the
character’s interior life. Throughout the opera her face, eyes and body
language were profoundly expressive and gave us real insight into Aida’s
mental stress. Gweneth Ann Jeffers has a substantial, vibrant voice (previously
she has sung La Gioconda, Leonora in La forza del destino and Santuzza
at Opera Holland Park and she has performed Aida at a number of theatres
including Finish National Opera), yet she was also able to spin a beautiful
long line. The Nile scene was sung with real expressive finesse with some
finely extended quiet high notes. Throughout there was this sense of line,
combined with a vibrant, well filled feeling for Verdi’s phrasing. She and
Peter Auty’s Radames developed a really intense relationship, again using
eyes and body language well before they sang a note together. Both brought out
the secure core of the underlying relationship, the ending was never in doubt.
The final scene gave us some finely sinuous lines in Verdi’s glorious
melodies, though Daniel Slater did not help matters here by making both of them
fatally ill and having the scene performed crawling about the floor. This was
one area where I felt that less would have been more. 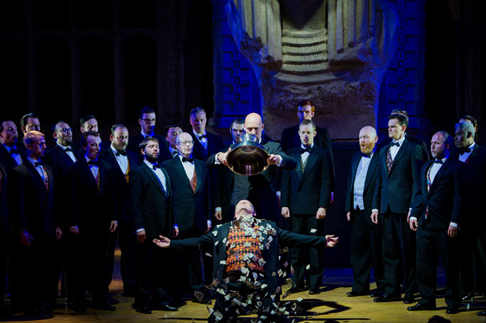 Graeme Broadbent as Ramfis and Peter Auty as Radames

If I said that Peter Auty’s Radames was a good steady portrayal of the
hero, making him solid and dependable, then though sounds unexciting then it
must be set into context of a role which few tenors today can sing with any
degree of credit. Peter Auty gave a robust account of Celeste Aida
with a climax which was secure, and expressive even if a trifle louder than
ideal. But once past this hurdle he developed in strength, intensity and a
feeling of the heroic, this was no stand and deliver performance.

Heather Shipp was a powerful Amneris, combining a vibrant vocal performance
with a highly musical personality. She was very much an Amneris who chewed the
scenery, but did so with a musical sense too. The Act 2 scene with Aida, where
Amneris tricks Aida into revealing she loves Radames, was particularly strong
with the two singers making a balance pairing. And Heather Shipp’s
performance revealed what we already knew, Amneris was a complete bitch goddess
– attractive, powerful, power-dressed and vicious. Her wonderful final solo
scene was superbly done, Heather Shipp really held the stage with her strong,
vibrant voice and intense dramatic presence, but the effect was weakened by
making Peter Auty’s Radames run around, fleeing from the priests. Another
example of the feeling that Daniel Slater was over-egging the drama.

Jonathan Veira made highly sympathetic Amonasro, bringing intensity to the
role but he seemed to want to punch each note out so that his performance
though vibrant rather lost any sense of line. He and Gweneth-Ann Jeffers
poignantly brought out the tension in their relationship.

Graeme Broadbent’s Ramfis was a far stronger personality, far more involved
in the drama than is sometimes the case and he turned in a wonderfully vivid,
at times alarming portrayal of a nasty piece of work. Keel Watson brought his
large voice to bear on the King to create a really larger than life musical
personality.

Emily Blanch made a fine impression in the small role of the priestess, now
reduced simply to a cabaret vamp, and Peter Davoren was the messenger in Act
One.

The chorus (chorus master Nicholas Jenkins), with no extra dancers involved
in the production, were hard working and delivered a really strong musical
performance throughout, singing with strong, vividly focussed tone. Whilst I
might have had doubts about the staging of the Triumph scene, the quality of
the musical and dramatic performance from the chorus was never in doubt. In the
men only sections of the opera, the male chorus made a fine, firm sound and had
a nice line in threatening behaviour. The women were seductive in the extreme
in their scenes.

I was slightly worried about balance at first, as Manlio Benzi seemed to
encouraging a strong and colourful account of the score from the orchestra but
this settled down after a while and we were able to sit back and enjoy a
vibrantly dramatic account of the score.