A few weeks ago, when I spoke with her by phone, she told me her story and why she thought she was ready to add this new role.
MN: Where did you grow up?
SG: I was born and grew up in a suburb of St. Paul, Minnesota. Both my mom and dad are from there. Even now, I’m the only one in the family who no longer lives in that area, although my parents spend winters in Florida. They come back for the summers, which, unfortunately, are no longer what they used to be. Now it rains more and does not get warm until August. We are lucky if we get one good week before the leaves begin to turn. 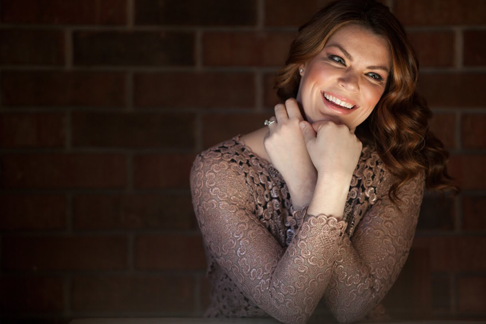 Sara Gartland [Photo by Marysol Flores]
MN: Did you study piano?
SG: Yes, my mom had me take piano as a child and although I can’t play well enough to accompany myself, I can play chords and my vocal line. That was very helpful in college because I had to pass piano proficiency tests for both my bachelor and master’s degrees. I started voice lessons the summer before I entered high school. At that time I was participating in so many activities that my mom let me drop piano. Now I wish I had kept up those lessons because I would like to be better able to accompany myself.
MN: When did you see your first opera?
SG: I saw Bizet’s Carmen at Minnesota Opera when I was a senior in high school. I don’t remember the cast but I loved the dramatic staging. The action and music made a big impact on me. I still love Carmen. It has everything in it.
MN: Where did you go after high school?
SG: I did my undergrad work at the University of Wisconsin at Madison and my master’s degree at the University of Colorado at Boulder (CU). In 2004, when I had just finished my master’s, CU implemented an opera certificate degree. They accepted me into their program and I became the first official recipient of CU’s Professional Certificate in Opera and Solo Vocal Performance. For me it was a fine opportunity because I needed time to marinate and learn more about my voice. Eventually, I went on to become an Adler Fellow at San Francisco opera. The opera certificate program at CU was very helpful to me because I worked on refining my languages and learned many roles there. 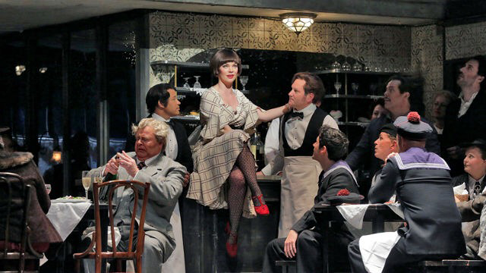 A scene from La bohËme at San Diego Opera [Photo by Ken Howard]
MN: What did you learn from your teachers that you would like to pass on to the next generation of singers?
SG: My current teacher, Anthony Manoli, talks about a suppressed yawn and deep, low, connected breath. My first teacher, Ilona Kombrink, taught this way as well. These concepts are fundamental to singing. Understanding breathing is of maximum importance. Singing should be as natural to a singer as crying is to a baby. Breathing for singing really is that simple. Babies don’t worry about being heard . . . and they most certainly are heard.
MN: How finished an artist should a young singer be when leaving school?
SG: Young singers need to know what they want from this career, and whom they trust with their instrument. The teacher is everything. Opera companies and Young Artist programs want to be able to plug them into existing holes in their programs. Most expect their young artists to be ready to perform onstage. 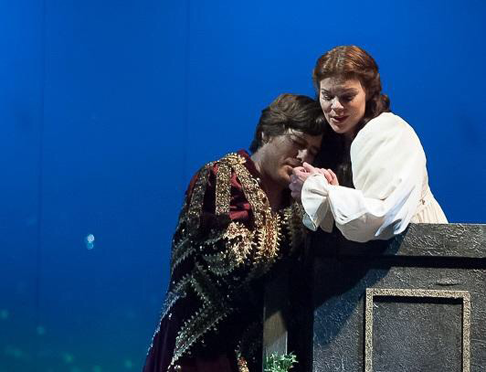 A scene from RomÈo et Juliette at Des Moines Metro Opera
MN: Did you sing at Irene Dalis’s Opera San Jose?
SG: I did. I was most fortunate in the opportunities that were available to me. When I had completed the Adler program at San Francisco Opera (SFO), Maestro Joseph Marcheso who works at both SFO and at Opera San Jose, asked if I would be interested in singing Gretel in Hansel and Gretel. He had heard me when I was a cover in the SFO Nixon in China because he was the cover conductor for that production. I had already sung Gretel in German in college. Opera San Jose was presenting it in English and I relished the fact that I would learn it in my own language. The program at San Jose is fantastic and I loved my time there.
MN: Do you sometimes say no to a role because you don’t think it suits your voice?
SG: Not so far. Jen?fa, which I will be singing in July at Des Moines Metro Opera, is a change for me, but I don’t find it to be a problem. The music is incredible, and the Czech language feels so good to sing. It is really an Italianate language. Jan·?ek wrote these beautiful verismo-like passages with dense orchestration. It is everything a singer wants in a role. The production, led by director Kristine McIntyre and conductor David Neely, is truly epic. They pay every possible attention to detail and drama. The cast, which includes Brenda Harris, Richard Cox, Joseph Dennis, and Joyce Castle, is phenomenal. It is going to be a real ride for the audiences at Des Moines Metro Opera this season.
MN: What is your interpretation of the title role?
SG: When approaching a role like this, I always focus on the language first. Speaking the Czech text and translating it helps the meaning and emotion sink in. Then I listen to every single recording I can find. Once I begin to learn the music, I take it to my teacher, Anthony Manoli, in New York City. He knows my voice and temperament, and he helps to mold and guide my vocal journey through every new character. A strong solid vocal technique is the key. With Tony’s technique and ears, I’m able to use my voice to communicate the composer’s musical intention without compromising my vocal integrity.