And yet, risks have been taken, with surprising and stimulating results.
Yoshi Oida’s 2007 production is more Japanese minimalism than Venetian
splendour, and when revived by Opera North at Snape in 2013, Tom
Schenk’s set designs exploited the natural fabrics of the Snape
Maltings Hall for which the production was designed. Deborah Warner’s
2007 ENO production, though the stage is largely bare, manages to suggest
through movement and light both an exquisitely sumptuous décor and a
melancholy barrenness of soul.

Kevin Knight’s designs for Paul Curran’s new production for
Garsington Opera offer both orthodox Venetian motifs and striking
abstraction. A sand-coloured floor curves up, like a wave in the lagoon,
meeting a Turner-esque blue sky; upon the horizon, the familiar shoreline is
intermittently projected. Bruno Poet’s lighting bathes the shore in
golden sunbeams, then bleaches it with the pallor of sickness; the gleaming
beauty of La Serenissima casts its heavenly illumination, before the dull
shadows of canal-borne disease darken the hues.

The stage is bare; in place of set and props we have four billowy white
curtains which intersect on the diagonal, wafting in the nascent
scirocco humidity. These curtains serve to separate Aschenbach from
reality, to trap him in the cold sterility of his intellect. Their whiteness
is both the creative purity of Apollonian discipline and the emotional
emptiness of a life repressed. They part to reveal the city and its
inhabitants; they frame the gondola that bears him southwards; they close to
prevent communication. So far, so good: but the ceaseless swishing back and
forth of these drapes becomes rather tedious after two and a half hours. And
sometimes the abstraction is imprecise or misleading. As Aschenbach strolls
dejectedly amid the suburbs of an imagined Munich, the Traveller appears in
an imagined cemetery; but, through the drifting chiffon we glimpse smartly
dressed tourists promenading along the Venetian strand – is Aschenbach
envisioning a journey that he does not yet know he will shortly undertake?
The absence of a set also necessitates the never-ending carriage of
esplanade benches, hotel sofas, anteroom palms and other paraphernalia to
suggest the various locations in which Aschenbach’s demise unfolds. 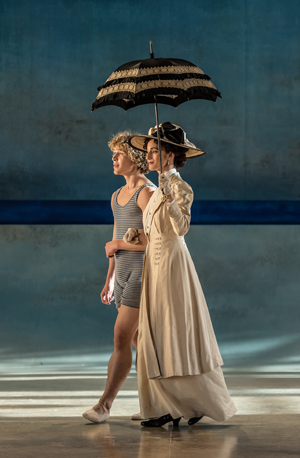 Celestin Boutin as Tadzio and Nina Goldman as Polish Mother

There’s a lot of to-ing and fro-ing. Indeed, movement takes
centre-stage in this production, in which Curran and his choreographer
Andreas Heise prioritise and supplement the opera’s dance episodes.
The choreography for the five male dancers blends classical balletic grace
with striking muscularity. The powerfully persuasive gestures draw just
about everyone into the dance: Tadziu’s mother (Nina Goldman),
governess (Georgie Rose Connolly), siblings (Minna Althaus and Poppy
Frankel), even the strawberry seller (Emily Vine) are swept up in the
athletic arabesques.

The set-pieces hook our attention but, in their erotic evocations, often go
far beyond the allusion and suggestiveness of Myfanwy Piper’s libretto
and Britten’s score. Apollo is no longer a disembodied voice, but
rather appears in person, attired in golden cloak and laurel crown –
both a deity of pure light and a dangerous sun-god – to oversee the
Games which bear his name, and which are watched by a chorus of sinister
Carnival-goers: harbingers of death, clad in black hooded cloaks and
gold-leaf masks. Tom Verney’s countertenor is not a voice of ethereal
purity or the honeyed mellifluousness of Elysium, but his unearthly cries
certainly emphasise the ‘unnaturalness’ of the god’s
pronouncements, sending a chill down the spine if not always complementing
the beauty of the beach Games’ vigour. Here, Heise’s gestures
drew directly and precisely upon the text: the running race was a frenetic
tumult of ‘flashing forms’ and ‘working arms’; the
dancers used astonishing elasticity to ‘spring high’ and
‘shoot forward’ in the long jump; ‘swinging up and
back’, they swirled hypnotically in the discus. The tightly wound
formations of the final game reached the height of erotic tension:
‘forehead to forehead/ fist to fist/ limbs coiled around limbs/
panting with strain’, they youthful competitors lifted Tadziu aloft,
to the pervasive reverberations of harp, double bass, pizzicato cello, gong
and tom tom.

These Games of Apollo anticipate Aschenbach’s subsequent Dionysian
dream. Again, the gods do battle, not within the writer’s troubled
psyche, but on the stage before us, as the revellers’ shrieks,
‘Aaoo!’, blend with the violently pulsing uproar of the drums
and the terrible sweetness of the flute. Although Piper had initially noted
that it would be necessary to ‘avoid the obviousness of the homosexual
theme’, she later made the well-intentioned but somewhat naïve
suggestion that during the second beach ballet the boys should be
‘really naked so as to remove the whole thing slightly from reality,
as the whole of Aschenbach’s attitude is removed from reality’;
Britten thought this was an excellent idea, which ‘could be
wonderfully beautiful, Hellenically evocative’, but the plan was
later, and perhaps fortunately, abandoned. Curran, however, follows
Piper’s suggestion and the Dream ends with Tadziu being stripped of
his sailor-suit by the carousing hordes, who caress and writhe around his
naked legs. Hellenic evocation seems far from Curran’s mind in this
Dionysian nightmare …

Even the Travelling Players’ suggestive lewdness is transformed into
outright vulgarity, as four male dancers indulge in mock offensiveness,
raising their skirts to expose their be-trousered behinds to the hotel
guests, and engaging in faux sodomy.

The remarkable central energy in the production is Celestin Boutin’s
mesmerising Tadziu. It’s impossible to state unequivocally how old
Tadziu should be or look but, despite his blond curls – which, like
some of the visual vignettes, seem to allude to the first performance by
dancer Robert Huguenin to whom Peter Pears’s Aschenbach fell victim
– Boutin’s physical maturity and strength, and sheer brazenness,
foreground the physical over the spiritual. Mann’s text formulates a
theory relating beauty to man’s spiritual and intellectual purity:
beauty partakes in a higher reality, a world beyond corruption where the
artist seeks to create his work. Boutin, however, is too physical to be
god-like; not a statuesque divinity but a mortal tempter. 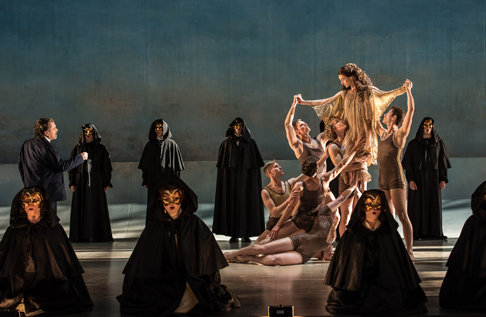 Boutin’s first entrance did convey a timeless immobility; the drums
were silenced by the shimmering vibraphone as he stepped slowly across the
stage,
relishing the onlookers’ admiring gaze. Certainly, Britten and Piper
suggest that Tadziu shares the incipient knowingness and coquetry of Miles in
The Turn of the Screw; he is on the cusp of sexual awakening. But,
Boutin boldly exults in the intensity of veneration. Moreover, by making Tadziu
mute, Britten suggests that any communication and consummation between
Aschenbach and the Polish boy is impossible: he is not a ‘real’
boy, but an idealization. In Curran’s vision, though, Tadziu’s
allure is all too ‘flesh-and-blood’. The score’s
invitational glances become physical advances, most notably at the end of
Act 1 as the boy reaches out to brush the straining fingertips of the
infatuated Aschenbach.

In the title role, Paul Nilon presents an astonishingly powerful portrait of
physical and moral decline. Nilon’s tenor is dark-coloured and
plangent, and he delivers the writer’s self-castigating monologues
with unwavering dramatic focus, smoothing over the florid verbosity of
Piper’s lengthy, high-falutin monologues with their heavy-handed
symbolism and indulgent Hellenic philosophising. Every word is clearly
enunciated and the free recitatives are thoughtfully phrased.

Nilon’s Aschenbach is the embodiment of emotional anguish – and,
surprisingly animated, swinging wildly from joy to despair. The
self-restraint of the opening moments is quickly swept away by fatal
passion; this Aschenbach does not languish in the hinterland, wearied and
depleted by his self-consuming devotion, but endeavours to engage directly
with the object of his adoration. Denied, by a hair’s breadth, the
ecstasy of physical touch at the end of Act 1, his howl, ‘I –
love you’, drains into a desperate sob: the moral and artistic
discipline which have upheld his entire life have been brutally shattered by
self-honesty, as foreshadowed by the Traveller at the start of the Act, when
he tears and scatters the pages of the esteemed writer’s book before
throwing the latter disparagingly to the ground. In Act 2 Nilon’s
decline is rapid and disturbingly palpable; and it is enhanced by the potent
lighting design as Poet takes advantage of the looming darkness, conjuring
volatile shadows which convey the protagonist’s fragmentation and
torment. After his visit to the barber, Aschenbach abandons all pretence,
clutching frenetically at the alarmed hotel guests as they prepare to
depart, seemingly indifferent to his own humiliation and disgrace.

William Dazeley is excellent in the composite role of the Traveller-Elderly
Fop-Gondolier-Hotel Manager-Barber-Leader of the Players-Dionysus,
metamorphosing between these disparate incarnations with sinister ease.
Dazeley’s bass may not quite be sufficiently deep-toned for the Hadean
Gondolier, but he was firm-voiced and authoritative as the mysterious
Traveller and bright and energised as the Hotel Manager, transforming his
voice skilfully. The falsetto of the Leader of the Players and the Barber
eerie echoed the Elderly Fop of Act 1, confirming the compound
figure’s role as a deathly herald.

In the minor roles, baritone Henry Manning was a fine English Clerk/Youth,
announcing the arrival of the cholera with clarity, while tenor Joshua Owen
Mills was a confident, bright-voiced Hotel Porter. The Garsington Chorus
was superb, suavely embodying the European clientele at the Lido Hotel and
forming an impassioned band of Dionysian followers. As hawkers and beggars,
they straggled along the esplanade, pestering and troubling the protagonist;
as youthful travellers, they soothingly crooned the Serenissima theme. 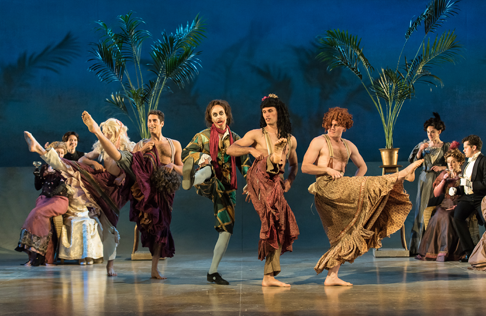 William Dazeley (Leader of the Players) with Company

Undoubtedly, the coherence and impact of this production owes much to
conductor Steuart Bedford. Bedford conducted the first performance of the
opera at the Aldeburgh Festival on 16th June 1973, and the
passing of forty-two years has only served to strengthen his appreciation of
the role of precise motivic and timbral details within the overall
structure, and of the musical and narrative trajectory of the work. We heard
every instrumental detail, the Garsington Opera Orchestra playing with
intensity and precision. Flamboyant harp glissandi, throbbing timpani
outbursts, the dark rumbles of the tuba, penetrating string lines and
eloquent woodwind solos created a concentrated sound-world which drew us
into the evolving psycho-drama. But there was warmth too, as when the
‘view theme’ expanded with a softening gleam.

Some productions err on the side of ambiguity and elusiveness, the
suggestive exoticism of the score counterbalanced by the text’s
Platonic theorising. For, while one might suggest that in Death in
Venice Britten located an explicit account of the energies which had
for so long been strong undercurrents in his operas, there remains an
evasive mist and there is little direct disclosure in Piper’s
libretto.

But Curran doesn’t hedge his bets – the forces released when
Aschenbach opens the heart which has for so long been imprisoned by artistic
discipline and repressive self-respect are dark and deadly. When Britten was
composing Death in Venice – during which time he was
suffering from acute heart arrhythmia – Peter Pears is reported to
have told the Australian painter, Sidney Nolan: ‘Ben is writing an
evil opera, and it’s killing him!’ And, Curran presents us with
what Ronald Duncan called ‘the public revelation of a private
agony’; the danger Duncan foresaw when ‘imagination and reality
become fused and identified’ is painfully played out. The final image
is a disquieting master-stroke: lured by the enticing silhouette of Tadziu
visible through the gauzy white hanging, Aschenbach leans forward, arms
outstretched – but, at the moment that it seems their hands might at
last touch, the lighting abruptly switches, the profile fades and all that
remains for Aschenbach is his own lurching shadow.

Aschenbach had hoped, ‘The power of beauty sets me free’. In the
event, it is Socrates whose words prove more germane: ‘beauty leads to
passion, and passion to the abyss’. Curran seems to be urging us to
ask, as did Peter Pears[1], if
the pursuit of beauty and love must always lead only to chaos?