On Saturday evening June 13, 2015, Los Angeles Opera presented Dog Days, a new opera with music by David T. Little and a text by Royce Vavrek. Audiences had already seen the work in Montclair, New Jersey, and Fort Worth, Texas. Los Angeles Opera presented it at the Roy and Edna Disney CalArts Theater (REDCAT), a tiny black box theater located in Walt Disney Hall. In the opera adopted from a story of the same name by Judy Budnitz, thirteen-year-old Lisa tells of her family’s mental and physical disintegration resulting from the ravages of a horrendous war.
Baritone James Bobick sings the part of her harried father who would have provided for his wife and children if he could. Since that was not possible, his emotions turned to anger. Although he walked around with a gun, there were no animals to hunt. Bobick’s part was huge and he sang it with gusto even though most of it was declamatory. His wife, sung by Marnie Breckenridge, tried to keep up appearances, but that, too, was impossible. 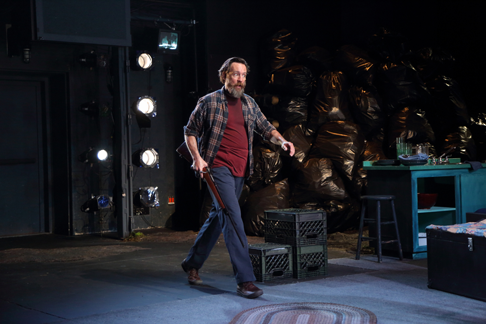 James Bobick as the Father

Except for a harmonized prayer before each of the family’s scant meals, the orchestral instruments seldom backed up the vocal line. Thus, the voices often lacked the support of traditional opera accompaniment. The Newspeak Orchestra, conducted by Alan Pierson, consisted of clarinet, guitar, piano, violin, viola, cello, double bass, and percussion team. This unusual group of instruments produced some interesting sonorities that were most effective in the instrumental interludes.
If your idea of opera is melodic music sung unamplified by some of the world’s most beautiful voices, Dog Days is not for you. Garth MacAleavey’s sound engineering amplified the voices as well as the noise and vibrations of a helicopter, which brought the family food, water and blankets. I wished Little had chosen to write his musical impression of a helicopter instead of using the actual sounds.
Lauren Worsham gave a magnificent interpretation of the teenaged Lisa who carefully chronicled this horrific story, knowing all the time that those who were most likely to read it had already died. Strangely, there were no supertitles shown except for a short space of time when Lisa wrote to a friend who might no longer have been living. Perhaps Lisa is a fictional Anne Frank for post apocalyptic times. As the reader can see by now, there is little uplifting about this opera. 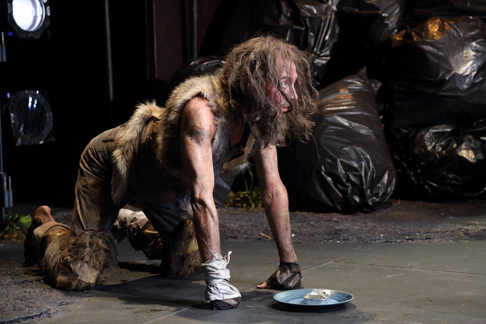 John Kelly as the Dog

The Dog, played by actor John Kelly, is actually a young man who wears a dog suit and crawls around on all fours. After a while, he seemed more human than the people. The least savory family members were Lisa’s two brothers, Elliott, sung by Michael Marcotte, and Pat, played by Peter Tantsits. They spent the last days of their lives smoking pot and looking at pornography.
The one scene that brought out some emotional reactions from the audience occurred when Lisa realized her mother had died. She looked at the dirt on her mother’s face and began to wash the body in an attempt to give her mother a decent burial. A moment later the helicopter noise and vibration was back and the emotional impact vanished. David T. Little has the makings of an interesting composer. I hope he will continue to write for the voice, possibly having learned some lessons from this opera.
Maria Nockin