Often these days the two parts are separated by a break of a couple hours thus enabling an audience to transcend the horror of the Trojan slaughter before settling into the beatific idyll of Dido’s Carthage and the fervors of founding Rome.
No such good fortune in San Francisco. It was done as one long moment, over five plus straight hours, its temporal monumentality forced into a single span of unrelenting musical and dramatic intensity. The action was so tightly drawn that British director David McVicar forced Susan Graham’s Dido to stand before a naked black stage curtain to deliver her impassioned adieu to Carthage (while her pyre was rolled onto the scene behind the curtain) — no pause before immediate immolation.
There was not a moment to be wasted in the race to the end.
On good days conductor Donald Runnicles brought the show in at just under five hours.
The McVicar production can indeed boast theatrical efficiency. It was all effected in front of a massive amphitheater shape set, its convex face apparent for Troy, its concave face exposed for Carthage. Both sides of the scenic unit were tiered so that the choristers could be deployed on the structure almost concert style gracefully eliminating the problem of how to stage the massive choruses. 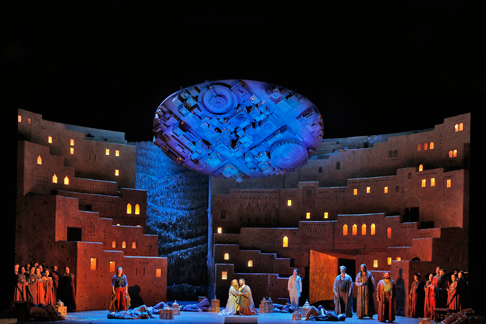 A scene from Act IV
Carthage was first a floor placed oval platform of miniature buildings on which McVicar’s signature male acolytes cavorted. The platform was tilted on its side and raised high, moonlike (deep blue light) for the garden, and then split, its halves moving to the sides of the stage when the love affair fell apart.
No stranger to heroic proportions the production designer, Es Devlin designed the closing ceremony of the 2012 London Olympics and will design the opening ceremony of the 2016 Rio de Janiero games. Maximum of effect with a minimum of means (someone mentioned there are 35 tons of Trojans scenery). Not to be confused with minimalism.
The McVicar direction was absolutely straightforward. The action was exactly the old story and exactly the music, like the choristers raining confetti onto their queen at the precise moments the Berlioz music spilled into momentary ecstasies. We were simply swept along by the action, no roadblocks to the inexorable destruction of a queen and her city.
Strangely the gigantic Trojan House head was made of bits of industrial revolution detritus plus a Greek shield or two, as was the gigantic torso of Aeneas that would one day squash Carthage. Dress was nineteenth century (a bewildered audience member was overheard explaining that maybe this was because there are a lot of nineteenth century operas so San Francisco Opera has a lot of old costumes that could be used).
If there was a concept besides theatrical efficiency it was not discernible. The McVicar production was heavy on solutions for easy story telling and quick scene changes. These solutions did make those five hours fly by with not a lot to think about!
Berlioz was left in the dust. Berlioz is an iconoclast, a misfit, a dreamer, an egomaniac, and of course a genius. His music is at once naive and brilliant. He absorbed Gluck and Beethoven making them uncomfortable partners. He could write meltingly beautiful music and at the same time relish in pushing harmonic rhythms beyond academic acceptability. It is not easy music.
Furthermore and by the way his estranged wife was an English Shakespearean tragedienne, he detested Rome as much as he detested (and was detested by) the operatic establishment. 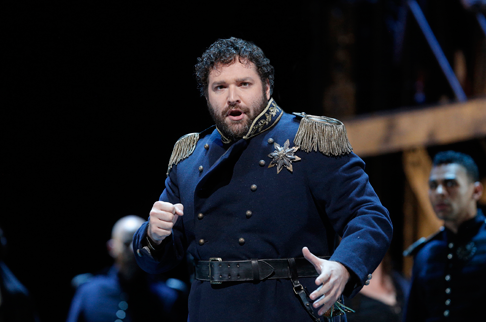 Bryon Hymel as Aeneas
There were many, many fine performances (it is a huge cast) in this San Francisco edition, certainly beginning with the conducting of Donald Runnicles who carefully, even too carefully integrated his musical flow into the slick McVicar storytelling. There was wonderfully direct communication and understanding between the stage and pit in measured — huge or intimate as needed — never unleashed musicality.
Italian mezzo soprano Anna Caterina Antonacci created a riveting Cassandra at the San Francisco premiere, her voice lying comfortably in the role, no hint of the careful control she exerts in creating her higher Gluck heroines, rather she was a beautiful, human Cassandra in warm, strong and open tone and in honest, agonized posture. This made her love duet with her husband-to-be Coroebus, sung by Brian Mulligan, the most splendid moment of these performances. Baritone Mulligan, a catch-all San Francisco Opera regular, here found a role where his voice flowed in quite beautifully smooth, French colored tones, his persona constrained in mannered postures consistent with this brief and sad final encounter with his fiancÈ.
At the second performance one week later the role of Cassandra was taken by American soprano Michaela Martens. She is known to broader audiences for brilliantly portraying the passivity of Marilyn Klinghoffer both at ENO and the Met. A fine singer with a sizable voice (and career) she does not have the persona or experience to embody this epic character role, begging the question why she was cast.
There is no question that the role of Aeneas currently belongs to American tenor Bryan Hymel. He is handsome and heroic, his voice lies perfectly in the French heroic style pioneered by Berlioz. He has a sound that is uniquely French (he is from New Orleans) the strength of voice to portray a hero, a top that is open, secure and thrilling. Most of all he exudes youth and discovery creating an Aeneas who is emotionally connected to discovering love and discovering the world. 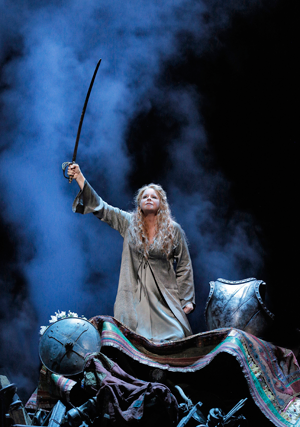