Which is a shame for on the first night there much fine singing, strong
musical direction from Antonio Pappano in the pit, and a convincing central
trope. But, there was also a wealth of redundant stage business and an absence
of meaningful stagecraft, with a series of tableaux replacing genuine dramatic
development. And, then there is the director’s decision to foreground the
sexual brutality of war, which so many in the audience — myself included —
found sensationalist, distasteful and gratuitous.

Paolo Fantin’s plain white-cube set, with its soil-strewn sloping floor,
evokes recent Balkan conflicts, though the context is widened by the costumes
of Carla Teti which range from the 1940s to the present day. There is certainly
nothing very pastoral about the opening Shepherd’s Festival — even though
Michieletto repeatedly hammers home the need to connect with the spirit of
one’s homeland as embodied in its earth. The villagers’ weddings
celebrations are rather muted as they sit at bare tables, the dull brown
alleviated by just a single unexceptional tree. 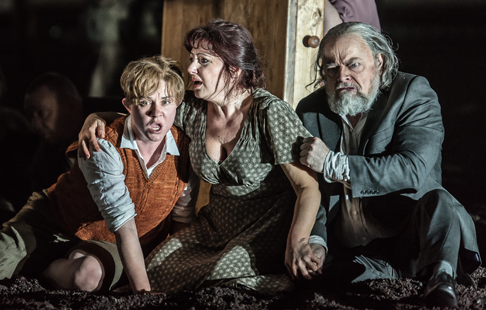 But, this tree is Michelietto’s big idea. Uprooted at the end of Act 1 by
a marauding Austrian soldier, the tree returns to dominate the stage in the
subsequent acts: horizontal and enlarged, its twisting branches and gnarled
roots etch and score sharp gothic shadows onto the bare skies beyond. It is a
striking symbol of the threat posed by colonial terrorists to a land and its
people, but Alessandro Carletti’s lighting design is fairly unadventurous —
a few juxtapositions of yellow and blue but otherwise muted — and over the
succeeding three and a half hours the shadows blend into the prevailing greys
and browns. More problematic is the fact that the tree is a hindrance to
movement; so, the fallen trunk can revolve to reveal different locations but
there is little meaningful choreography within those locations.

Perhaps we are supposed to imagine the various scenes as a sequence of
story-book stills? For, as is made clear to us by the film projection which
accompanies the overture, what we are witnessing is actually taking place in
the imagination of William Tell’s son, Jemmy. This also helps to explain how
and why the silent Robin Hood-figure who roams the stage, flamboyantly stabbed
arrow-heads and later a shining cutlass into the table tops and soil, has found
himself amid these rather bland mid-twentieth century insurgents. Thus, this
feather-hatted, red-cloaked archer has stepped straight from the
Illustrated Classics tale that Jemmy has been reading while
manoeuvring his lime green and mustard yellow toy soldiers into strategic
battle formations. And, the legendary medieval marksman provides a benchmark by
which young Jemmy can measure his own father’s achievements and courage,
culminating — when Tell has been captured — in a petulant outburst in which
Jemmy rips the pages from his book, while the comic-strip narrative is
projected on a front-stage screen. 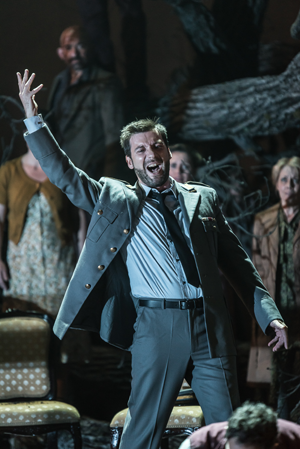 The red-cloaked figure comes into his own in the mimed scenes with which
Michelietto replaces Rossini’s original dance sequences. In 1820s Paris,
Rossini’s OpÈra audience welcomed, indeed expected, lengthy ballet
scenes; but the diegetic dance music presents a challenge for the modern
director. In this production, the divertissement of Act 1 is an
archery competition in which Jemmy finesses his skills, but even the presence
of the master-archer cannot stop a few of the arrows falling shy of the
bull’s-eye. And, such child’s-play is not entirely harmless, Michieletto
suggests, when in Act 2 the Austrian soldiers try to teach the Swiss children
how to a cross a sword or pull a trigger — not so dissimilar to the lesson in
weaponry that Tell gives his son.

There’s a lot of superfluous business in these mime episodes, but they
trundle along without causing undue alarm, until we reach Act 3. Now, the
forest floor is decorated with, first, the genteel soft furnishings of
Mathilde’s Habsburg palace, and then the elongated table and sparkling
chandelier of the occupying Austrian officers’ banqueting room. The sadistic
Austrian Governor, Gesler, orders festivities to mark the Empire’s benign
sustenance of the pitiful Swiss nation; one would expect some innocuous folky
stuff to follow. But, Michieletto gives us a prolonged sexual attack during
which a female actor is abused by the officers, force-fed champagne, molested
with a pistol and then stripped naked and gang-raped atop the banquet table.

These unwarranted, distasteful antics are not only entirely completely at
odds with the spirit and style of Rossini’s music, but on this opening night
they also upset a large proportion of the audience who proceeded to make their
condemnation piercingly known; and as the jeering and hissing escalated, the
hecklers were themselves barracked by those disapproving of such
mid-performance raucousness. Pappano and the cast ploughed on regardless, only
to be greeted with more hooting at the end of the dance sequence.

Cat-calling at the curtain has been common of late at Covent Garden but,
clearly rattled by such an unprecedented mid-performance outburst, Kasper
Holten subsequently felt obliged to issue an explanatory, mollifying statement:
‘The production includes a scene which puts the spotlight on the brutal
reality of women being abused during war time, and sexual violence being a
tragic fact of war. The production intends to make it an uncomfortable scene,
just as there are several upsetting and violent scenes in Rossini’s score. We
are sorry if some people have found this distressing.’ 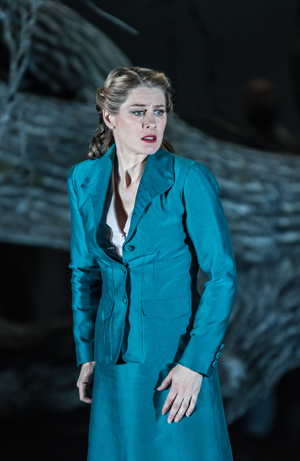 In truth, the sexual violence was probably no more explicit than that
presented in any number of modern opera, theatre or cinema productions; but, it
was prolonged and uncalled-for. Few can be unaware of the ‘brutality, the
suffering [people in war zones] have had to face’ (which Michieletto has
insisted it was his intent to illuminate for us) given the newsfeed from
war-torn lands which we see on a daily basis. But, the heckling was excessive
too, and it made it difficult for Pappano and the cast to establish a fittingly
poignant mood for the beautiful duet between Guillaume and Jemmy which follows,
as the former prepares for his apple-target challenge.

The sneering of a few malcontents threatened to resume at the start of Act
4, just as John Osborn prepared to tackle one of the most demanding
scenas in the opera, indeed in the repertoire, but it was silenced by
the hushings of the majority. In the role of Arnold Melcthal, Osborn gave the
performance of the evening, surmounting the registral challenges with
confidence and security. Arnold was understandably tense in Act 1, and he
tended to launch vigorously at the top notes, sometimes over-reaching and the
tone a little taut. But, he relaxed into the role — his Act 2 duet with
Mathilde, ‘Oui, vous l’arrachez ‡ mon ‚me’ (Yes, you wring from my soul)
was beautifully phrased — and he showed great stamina, going from strength to
strength as the drama unrolled. Osborn has both the dark weight and bel canto
lyricism that the role demands, and he exhibited flexibility, bright clarity
and superb enunciation in the stirring lament that opens Act 4, and tremendous
power and projection in ‘Amis, amis, secondez ma vengeance’ (Friends,
friends, assist my vengeance) despatching the repeating top Cs with dramatic
and musical conviction.

Malin Bystrˆm was clear-voiced as Mathilde, using varying tone to convey
emotion and passion. She and the other soloists were not always sympathetically
supported by Michieletto: at the start of her first aria — ‘Sombre forÍt,
dÈsert triste et sauvage’ (Somber forest, sad and savage wilderness) in Act
2 — Bystrˆm was asked to climb onto the twisted tree trunk at a time when
she must have had other, more important, musical matters to contemplate than
focusing on not slipping from her precarious platform. It was also unclear why
she needed to take off some of her clothes during this aria — surely it was
cold in the forest — unless it was to embrace the tree with her bare flesh in
order to imbibe the spirit of her fatherland?

Gerard Finley’s William Tell is a rather dejected and jaded people’s
champion, seemingly worn out by the struggle both to resist his oppressors and
to inspire his countrymen. But, while at times dramatic low-key, Finley was a
characteristically dignified musical presence; each phrase was carefully
considered and his legato phrasing and even tone production gave Tell stature
and won our compassion. His anguished guidance to Jemmy, ‘Sois immobile’
(Stay completely still), before his young son must face his father’s
cross-bow, was deeply moving. And, Finley was a striking figure at the end of
Act 2 as, stripped to the waist and smeared with the blood and earth of the
Swiss brotherhood, he raised his fist aloft, urging his fellowmen to
revolution. 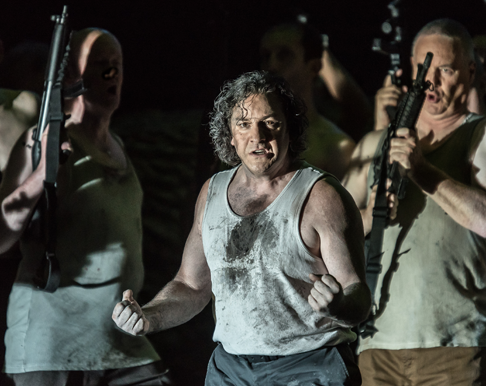 If Tell was rather world-weary at times, his son Jemmy bounced about in his
knee-length trousers like a boisterous Hansel who’d strayed into the wrong
opera. Sofia Fomina sang with fresh sweetness, but her caricature Jemmy was out
of kilter with the general tone.

There were strong performances from the supporting cast. Enkelejda Shkosa
was a convincing Hedwige, Tell’s wife; in the Act 4 trio in which she is
reunited with her son, and in her premature aria of mourning for the husband
she fears is dead, ‘Sauve Guillaume! Il meurt victime de son amour pour son
pays’ (Save William! He died a victim of his love for his country), the
Albanian mezzo-soprano showed that she is a genuine singing actress. Jette
Parker Young Artist Samuel Dale Johnson was a confident, smooth-toned Leuthold
and Michael Colvin’s rich lyrical tenor evoked the sinister cruelty of
Rodolphe, Gelser’s commander. Nicolas Courjal’s Gesler is vivid, though
perhaps a shade too close to becoming a comic-book sadist; but Courjal used the
words and his black-hued bass effectively. Ruodi’s harp-accompanied
fisherman’s song was delivered with a gentle lilt by Mikeldi Atxalandabaso,
and Eric Halfvarson’s Malcthal senior had strong presence, once he’d got
his rather wayward vibrato under control.

Given the dearth of dramatic drive on stage, Pappano worked hard to maintain
the musical momentum. The overture was somewhat disappointing: the five solo
cellos’ ‘Dawn Prelude’ was a little tentative and the trombones’
running scales in the Storm lagged behind the beat. But, things settled down
and Pappano exploited Rossini’s emotive textures and colourings to the full.
The horns, particularly, were on terrific form all night — heartily bombastic
in the Act 2 huntsmen’s chorus — and there was finely nuanced playing from
the woodwind complemented by accurate rapid passagework in the strings.

Rossini relies heavily on the chorus in this opera, but the Royal Opera
Chorus gave an inconsistent performance. At their best — when the men of the
three Swiss cantons swear to fight or die for the freedom of Switzerland at the
close of Act 2 (when they were illuminated by the blinding gleam of
revolutionary fervour), or in the triumphal choruses of Act 3 — they sang
with vigour and heartiness; but the Act 1 choruses of young people and
villagers were pretty lacklustre, and the chorus were persistently adrift of
Pappano’s beat; almost irretrievably so in Act 4. It was perhaps not entirely
the chorus’s fault that they failed to make a more dependable impact. Given
that the stage was dominated by the fallen tree, there was barely room for them
to stand, let alone move; and it was not clear why Michieletto thought that
asking the down-at-heel Swiss rebels to remove their shirts, revealing their
greying old vests, would enhance their image as valiant revolutionaries.

There is nothing very epic, heroic or spectacular about this Guillaume
Tell. Michieletto misses the target by a mile, though the final image
perhaps offers some consolation. The chorus sift through the soil rejoicing at
the resurgence of their homeland and as the toppled tree is raised aloft, a
young boy comes to the fore-stage and, in a bright spotlight, plants the sprigs
of a sapling: the roots of a culture can never be entirely expunged. One must
hope that the same is true for Covent Garden itself: that, as it continues in
good musical health, new directorial roots will forge down into the
achievements of the past and revived shoots will emerge.